Peacock’s intelligent and gripping “Dr. Death,” based on the podcast of the same name, avoids the pitfalls of many true crime narratives, smartly realizing that a monster like Christopher Duntsch can’t be explained in an eight-episode mini-series. I have a strong aversion to projects about sociopaths that attempt to explain them away via abusive pasts or other supposed “reasons” for their actions. Those ideas proliferate because of a human need to try and compartmentalize evil, but men like Chris Duntsch can’t be so easily explained, and this series about his rise and fall understands that. With excellent performances and a procedural tone that interrogates an entire system instead of just one man, “Dr. Death” is a solid drama about a man who thought he could play God but never realized he wasn’t talented or smart enough to do so.

A rising star in the Dallas medical community, Christopher Duntsch (Joshua Jackson) promised life-changing procedures to his patients, most of whom came to him at the lowest points in their lives. He claimed to be a pioneer in stem cell research that would forever change those afflicted with spinal issues, and his neurosurgery practice seemed like it was on the rise when patients suddenly started coming out of his procedures maimed or worse. A neurosurgeon named Robert Henderson (Alec Baldwin) who was called in to clean up one of Duntsch’s botched surgeries realized the borderline insane situation with which he was dealing and aligned with a colleague named Randall Kirby (Christian Slater) to try and get Duntsch’s license taken away. As they investigated Duntsch’s many failures, they realized the depth of his depravity, and the whole thing turned into a legal case, led by a young Dallas prosecutor named Michelle Shugart (AnnaSophia Robb), who eventually prosecuted Duntsch in a precedent-setting trial.

Created by Patrick Macmanus (“Homecoming”), “Dr. Death” jumps back and forth between the developing case—first focusing on Henderson/Kirby’s medical investigation and then the legal one with Shugart—and flashbacks to Duntsch’s procedures and personal life. The show opens with disclaimers about some names and facts changed for fiction’s sake, but the version of Duntsch here is a vile user, someone who discarded not just patients but everyone who helped him along the way, including his son’s mother (Molly Griggs). Even Duntsch's best friend Jerry (Dominic Burgess) ended up one of his victims after a spinal surgery paralyzed him. The portrait of Duntsch here is someone who impresses at first, especially those on hospital boards who might make money off a hotshot neurosurgeon, but whose façade eventually crumbles, taking anyone around into the rubble. It certainly does for a confident physician’s assistant (an effective Grace Gummer), who sees firsthand the corners that Duntsch is willing to cut.

The flashbacks present a man who somehow thought he could push through any adversity. That’s one thing when you’re repeatedly getting a play wrong in a football practice, and quite another when you’re incapable of performing the spinal surgeries that you’ve promised your patients. And yet “Dr. Death” smartly never resorts to humanizing Duntsch, who sees his mistakes as mere common malpractice all the way up to the end. What’s so disturbing about this case is the idea, raised a few times here, that Duntsch must have known what he was doing in a few instances. Is it possible he was a literal sociopath and maimed his patients on purpose? Dr. Henderson sure seems to think so as he explains how the violence from Duntsch’s surgeries would be hard to call accidental. It sounds like even someone who had never performed a surgery would know that they were doing something very wrong. Did Duntsch? Did he just not care? We'll never know, and "Dr. Death" wisely only hints at these darker themes instead of turning into melodrama. It makes them all the more terrifying.

The generally underrated Joshua Jackson carries “Dr. Death” with a fascinating blend of idiotic confidence and nonchalant sociopathology. He nails the ego that often hides incompetence, embodying a person who thinks he can merely work around inadequacy. We’ve all met men like Chris Duntsch—people that think if they tell themselves that they can change the world that it will somehow be true. What separates this story is that most of those people get shot down before they can do real harm, but Duntsch was enabled again and again. There’s a fascinating undercurrent to “Dr. Death” that reminded me of “Spotlight,” another story of vile predators who were moved around a broken system instead of brought to justice. Duntsch was allowed to perform dozens of life-changing bad surgeries and even killed a couple people before upstanding fellow surgeons took him down.

The whole cast matches Jackson’s nuance, especially Slater and Baldwin. It’s particularly rewarding to see the latter get a subtle, complex role for the first time in what feels like a long time—there’s a quiet fury and professional disgust to his performance that’s admirable. And Slater balances him nicely with a more brash, outgoing performance so the two don’t feel like the same character. Robb is definitely good, but I’ll admit to liking the first half of the season more when Baldwin/Slater were driving the investigation instead of the legal hotshot. The transition leads to a bit of a drag in the middle of the season and I’d be remiss if I didn’t mention the fat suit prosthetics that Jackson is forced to act through in the last couple episodes, which are a drastic misfire. Each episode opens with the disclaimer that some of the truth has been bent, and I get that the fat suit is meant to further represent Duntsch’s decline, but it’s just distracting.

Finally, it’s important to note that “Dr. Death” never feels sensational or exploitative, expressing the empathy for Duntsch’s victims he so clearly lacked. It’s ultimately a castigation of a system that values profits over professionalism, and tells young upstarts like Duntsch that they'll be the faces of a medical revolution before asking if the person with the scalpel is at all capable of leading the way. 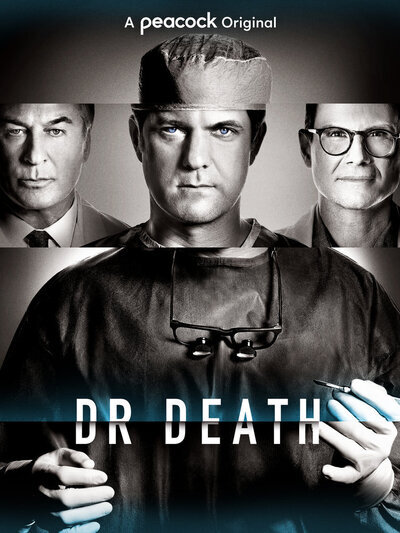