This sneakily profound lyric kept echoing in my head throughout the entirety of “Dosed,” which opens with its first-time writer/director/editor Tyler Chandler asking his subject, Adrianne, how she wants their documentary to end. Had Chandler not intervened in the life of his friend, there’s a good chance that her story, like that of so many struggling addicts, would’ve been cut cruelly short. In many ways, his camera holds her accountable, forcing her to face the ways in which she has deceived herself and others on her journey toward sobriety. Adrianne is nothing short of courageous in how she allows us to observe her at her most vulnerable, whether she’s vomiting up excess pills on the street or in the disoriented throes of recovery. Not once does the movie reduce her to a patronizing stereotype, opting to keep her dignity intact without shielding us from the various obstacles in her path, the most glaring being a healthcare system banking on the cyclical misery of patients, whom we see on a conveyor belt bound for the pharmacy in one of the film’s most potent animated illustrations. What ultimately breaks through the darkness of Adrianne’s psyche like a piercing rainbow is the aid of anti-addictive psychedelics that remain illegal to this day, thanks to Nixon.

One of my favorite documentaries from 2019 was Louis Schwartzberg’s “Fantastic Fungi,” an exuberant and resoundingly hopeful look at how our natural environment provides startling remedies in the unlikeliest of places. Take, for example, psilocybin mushrooms, which mycologist Paul Stamets not only credits for helping him lose his stutter, but believes that they may have altered the minds of early man, causing them to evolve into civilized beings. They’ve also caused lab rats to overcome fear-conditioned responses by opening new neurological pathways in their brain, while helping patients diagnosed with terminal illnesses reclaim a sense of inner peace and purpose. My only nagging issue with Schwartzberg’s film was that, at 75 minutes, it spun through so many facts and theories that it was difficult to determine just how many would hold up under scrutiny. It made me eager to see the array of examples expanded into a miniseries, and “Dosed” resembles precisely the sort of feature-length episode I was yearning for, providing a detailed analysis for how psilocybin can play a crucial role in curing opioid addiction. Stamets is among the experts rounded up for Chandler’s talking heads, yet what makes the film persuasive, first and foremost, is Adrianne herself, as we see her eyes shine with a newfound clarity once the haze of heroin has lifted.

Wracked with PTSD that she doesn’t quite understand, Adrianne’s persistent anxiety keeps her within the malicious grip of opioids and methadone, which are designed to make users feel abnormal unless they keep taking them. Gradually, we are fed details of her past: she grew up with a single mom, disliked her mother’s boyfriend, was cheated on by her own boyfriend and ended up working for a law firm where her colleagues were doing coke. She has vague memories of having an unsettling encounter with a babysitter, yet the film refrains from elaborating on whatever abuse she may have suffered, concentrating instead on how she is able to make peace with her demons. There’s a heartbreaking scene where she bursts into tears while recounting how difficult it was to have her ailing cat put down, since it provided her with an unconditional love that human relationships have often failed to provide. Weighing upon her constantly is the fear of finding herself among the homeless addicts filling the alleys in Vancouver’s Downtown Eastside neighborhood, and her immediate relapses upon leaving rehab have only intensified her paranoia. Her stunted emotional growth that can be traced back to the moment she began using at age 15 requires a full system reboot administered by underground healers. Their prescription is therapeutic doses of psilocybin mushrooms as well as ibogaine, the psychoactive substance found in rainforest shrubs native to West Africa.

Occasionally, “Dosed” resembles an extended educational video rather than a work of cinema, with its pedestrian score and PowerPoint-style title cards. Unlike “Fantastic Fungi,” which contained dazzling visuals that demanded to be seen on the big screen, the direct-to-VOD release given to Chandler’s film as a result of the Covid-19 pandemic won’t reduce its aesthetic value in the slightest. Thankfully, when it comes to the potential side effects of a psilocybin or ibogaine treatment, Chandler doesn’t succumb to commercial clichés by cutting to an elderly couple blissfully rowing a boat. On numerous occasions, the film makes it clear that without proper medical testing and supervision, the substances could prove fatal. I wish the iboga ceremony itself, with its theatrical use of fire and horns, was given more context, since the footage is more suggestive of horror than healing. Why Adrianne’s heroin intake wasn’t tested prior to the ceremony is another lingering question left unexplored. Yet what needs no further explanation is the transformative impact these plants have had on her sense of self. After her first full dose of psilocybin, Adrianne is able to look at her life from the outside, in the same way that cinema is an out-of-body experience that guides us inward, heightening our empathy for everything we would normally take for granted. She realizes that she deserves at least as much compassion as she gives her cat, and when ibogaine causes her to envision her own death, it affirms just how profoundly she wants to live.

Like other agenda-driven documentaries, “Dosed” ends with a call to action, encouraging viewers to visit the film’s official site where they can do their part in helping decriminalize psychedelic medicine, while keeping in mind that such remedies must be handled responsibly. Beyond its message and intent, Chandler’s film is a raw and insightful portrait of the psychology fueling addiction, and how the healing of pain and depression must be tackled in a healthy way. During these increasingly uncertain days, the film’s timeliness is twofold, in light of both the lives lost last year to opioids and the untold lives around the world currently crippled with anxiety amidst this crisis, making them all the more susceptible to any available method for numbing their senses. The enforced period of isolation we are separately sharing in gives us a great deal of time for reflection, and my hope is that it will illuminate for us the sheer miraculousness of our existence, not to mention how intrinsically connected we are with every fellow inhabitant on our planet. We truly possess the power to write our own collective ending, and nature is equipped with the tools to guide us toward a happy one. Dorothy was right. We needn’t look any further than our own backyard. 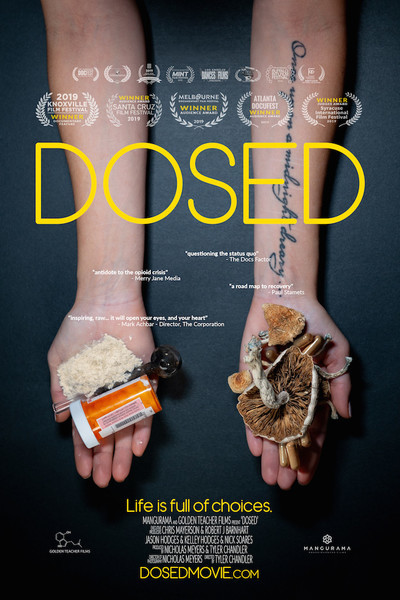