Do you remember the first time you realized that you were capable of hurting a loved one? The makers of the ambitious, but ultimately misconceived horror drama "Don't Sleep" wrestle with that profound, formative trauma. Writer/director Rick Bieber announces the severity and portentousness of his film's main theme by kicking off "Don't Sleep" with a Nietzsche quote about the burden of identifying with the darker aspects of your personality. This is minutes after we're treated to a Z-grade quality dream sequence where a little boy named Zach (Dash Williams) wanders around a foggy marsh. Before he wakes up, Zach is taunted by a bald crone, shown the rotting, British-quality teeth of a little girl wearing a sack-cloth mask, and then assaulted by a sickly-looking evil twin. When Zach wakes up, he is taken to the office of inappropriately chipper therapist Dr. Summers (Cary Elwes), and told that he's just having bad dreams, so why be scared of some bad nocturnal emissions?

If you're willing to even momentarily fall for Dr. Summers' weak tea reassurances, you may just fall for what Bieber is selling.

Zach's unnecessarily convoluted story then fast-forwards several years into his future. He's married now, and has moved into a new house with his beautiful wife Shawn (Charlbi Dean Kriek). At this time, Zach (now played by Dominic Sherwood) seems to have it all. We know this because secondary characters, like Dr. Summers, and Zach's childhood friend Timmy (Andrew Caldwell), all tell him as much. Over and over, we are reminded: Zach earns good grades in law school, has a good relationship with next-door neighbors Jo and Vincent (Drea de Matteo and Alex Carter), and even has a great marriage. He apparently could not ask for anything more. That all changes around the time when Vincent's father Mr. Marino (Alex Rocco) commits suicide. Zach starts to see his childhood double, a pale teenager cloaked in, um, a rather non-threatening hoodie. Zach is also haunted by images of a man being tortured on his laptop. Nobody believes Zach, or understands why he wants to remember, but he must know: what happened to him when he was a child, and why is it so boring?

OK, fine, only (understandably) confused moviegoers will grapple with the last part of my rhetorical question. Still, "Don't Sleep" is only of cursory interest because of the tough questions that Bieber puts in main characters' mouths, like how can you take responsibility for your actions when even your family and friends find them too dark to face? "Don't Sleep" eventually becomes a movie about a community of well-wishers that help a bright young kid hide from himself. He's compartmentalized a dark past to the point where he, as Bieber ostentatiously points out, can only process the pain of ... something ... by seeing it through jumbled-up horror movie tropes.

What's weird and that much more disappointing about "Don't Sleep" is Zach's not the only one haunted by his past. It literally takes a village to create and be moved by Zach's demons, like when a closet door mysteriously pops open while Shawn undresses before taking a shower. Or how about when Jo is having sex with Vincent, and she sees something terrible over her shoulder? You might think, based on this admittedly selective plot summary, that you were watching a horror movie about the terror of living with a "nice guy" type, someone who nobody is willing to admit is capable of hurting the women in his life. You don't even need to dig that far to find that subtext in "Don't Sleep." What else are we supposed to think when Jo drops a random truth bomb on Vincent, and recalls an urban legend that Mr. Marino once told her about a Crusades-era warrior who becomes a monster after his wife is repeatedly raped during his war-time absence? If this movie isn't about the nightmare of living with an unreflective white knight, what is it about?

That's a question that I sadly don't have a snappy retort for. "Don't Sleep" fails on a number of levels, most immediately because it takes too long to figure out what Bieber is saying. There's a hokey twist ending at the film's end that suggests that Zach isn't solely responsible for his actions, and that even if he were, his problems are universal, and therefore human, and relatable. I'd believe this conciliatory line of thought if Bieber convinced me that he cares enough about his characters to absolve all of them of their sins. There's a lot of moving parts to Zach's story, but I never got the sense that his problems were indicative of anything more than a guilty individual's quest to understand himself better. By shifting focus to everyone else—partly for misdirection's sake—Bieber allows us to wonder who is most to blame. This sounds an awful lot like victim-blaming, a notion that is impossible to stomach in a movie where there's all sorts of unchallenged acknowledgments of the fact that Shawn's beauty and patience is essentially a sign of his superficially trouble-free dream life. Timmy even jokes three times about wanting to make it with Shawn. She's a trophy, an afterthought in a story that should, at the bare minimum, consider the impact of Zach's actions on his loved ones.

I want to recommend "Don't Sleep" because it is, intellectually, more compelling than many of the indie horror films I tend to watch. But I can't recommend this movie, mostly because it's not smart enough to deserve that praise. Bieber never stops announcing his intentions to take on heavy subjects, whether it's in the way that this characters baldly over-state their concerns without elaborating on them, or the way that his generic boogeymen antagonists allude to traumas without ever convincingly carrying them out. "Don't Sleep" could have been a great horror movie. Too bad a great topic does not necessarily make a great film. 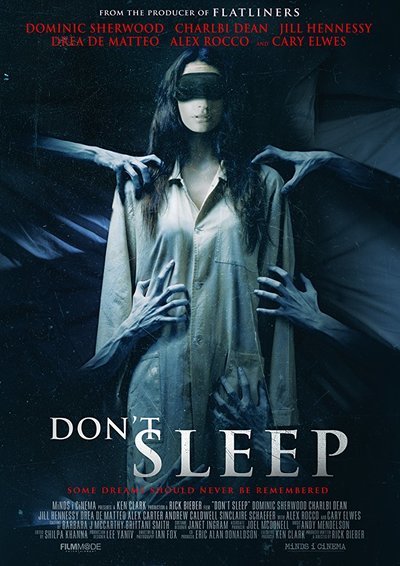