The word “clichéd” gets thrown around a lot and many who use the word “trope” have no idea what it means. The truth is that clichés and tropes are commonly pulled out of the writer’s toolbox because they often work when they’re done well. Hannah Marks' “Don’t Make Me Go,” premiering on Prime Video today after its Tribeca premiere, doesn’t break new ground, but it’s easy to dismiss its familiarity because we believe in the people in front of us. When the characters are richly drawn and the emotions feel earned, we put aside those criticisms. They’re really only clichés when we don't believe them. And, at least until a sharp left turn in the final act, the two excellent central performances here and the manner in which they’re empathetically directed, make any of those over-used criticisms of “Don’t Make Me Go” feel downright cynical.

Max Park (John Cho) is keeping a secret from his daughter. He’s been recently told that he has a tumor at the base of his brain that’s going to kill him in about a year. There’s a surgery that could remove it, but the survival rate of that is only about 20%. He’s probably too scared to do that, and so he knows he doesn’t have much time left to make sure that his teenage daughter Wally (Mia Isaac) is prepared for the world. Without telling her that he’s dying, he takes Wally on a road trip to his 20th college reunion to track down her estranged mother via the old buddy (Jemaine Clement) who broke them up in the first place. At the same time, the news of his diagnosis shifts the dynamic between Max and a casual girlfriend named Annie (Kaya Scodelario).

Clearly, this is a screenplay (by Vera Herbert) that’s just full of potential traps. Do I accept that a guy like Max really wouldn’t tell his daughter that he was dying as he took her to meet her birth mother for the first time? Not really. And it’s the kind of screenwriting trick that usually leads to unforgivable melodrama, in which characters are forced to take actions that aren’t relatable in order to manipulate the audience's emotions. There’s a better version of this film with these two performers that trusts viewers a bit more and doesn’t withhold the truth about Max’s condition from Wally for a perfectly timed climax.

And yet it’s easy to take the ride with Max and Wally because of the two performers who bring them to life. Cho has always been such a natural presence on screen, finding ways to be both remarkably charismatic and completely organic as an average guy at the same time. Isaac is a true breakthrough, selling the emotion of Wally’s arc in a way that feels lived in instead of melodramatic. Marks has a skill with character, and her clear trust in Cho and Isaac is rewarded with a father/daughter chemistry that we believe 100%, which allows the emotional arc to connect even when we can see where it’s going.

Until we can’t. Without spoiling, the final act of “Don’t Make Me Go” has a big twist. Yes, there are clues to its arrival, but some viewers will feel cheated by it. There’s a saying that a movie has to earn its ending, and I’m not sure this one does. It plays like a writer and director trying to get out of the melodrama's predictability, by trying so hard to counter claims of clichés and tropes with something completely unexpected. But it doesn’t have the weight of what came before, and it's cheap in ways the movie's first hour never is.

By that point, “Don’t Make Me Go” had earned enough goodwill in me through the sheer strength of Cho and Isaac’s performances that I was able to forgive it stumbling through its final choices. After all, "Don't Make Me Go" is about how fathers and daughters can never be perfect enough for each other. Maybe it makes sense that it’s an imperfect movie too. 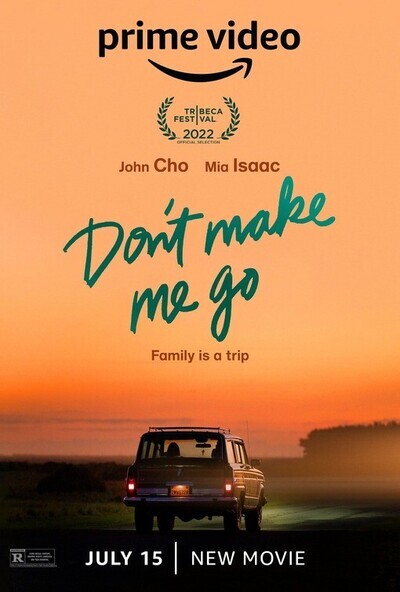