The premise of "Don't Let Go," written and directed by Jacob Estes, is so intriguing, with such rich possibilities. When a loved one is ripped away from you in death, you are deprived of the opportunity to say what you need to say. There's so much unfinished business. But what would happen if that person contacted you from beyond the grave? What would happen if the person's death created a wrinkle in the space-time continuum, allowing you to communicate, albeit on different timelines? Grief messes with your head. Loss is unthinkable and the brain comes up with all kinds of "magical thinking" (to quote Joan Didion's famous memoir on the topic) to get through it. This is at the heart of the screenplay for "Don't Let Go," providing some of its most interesting aspects, so it's a disappointment when so much goes unexplored, when the film bows to the demands of a cliched plot driving the story forward.

Jack Radcliff (David Oyelowo), a cop living and working in Los Angeles, has a close relationship with his niece Ashley (Storm Reid). Ashley's father Garrett (Jack's brother) is a screw-up, and Jack and Ashley talk about this with the frankness of well-trod ground. There's a sweet scene in a diner the two frequent, where they do a drawing-game together. There's darkness on the edge, though, a darkness threatening Ashley's world. Ashley is hopeful her dad is now on the right path. Jack is not so sure. His fears are more than justified when, after a disturbing call from Ashley, he discovers Garrett, Ashley's mom, and Ashley, brutally murdered in their home.

The investigation suggests a murder-suicide, but Jack, overcome by grief, is sure it is something more. Then one day, Jack's phone rings. It's Ashley. At first he thinks he's losing his mind, but Jack slowly accepts the supernatural, and when he figures out that Ashley is calling him from two weeks ago, uncle and niece band together, on separate time-lines, to try to discover who was responsible for the murders. And maybe, Jack hopes, they can reverse time. Maybe Ashley can be saved.

This is all really fun, calling to mind "Frequency" (which I saw solely on the basis of Roger Ebert's review), where a son (Jim Caviezel) is able to talk to his dead father (Dennis Quaid) over an old ham radio. While "Frequency" also had plot-driven elements—the son wants to go back and undo his dad's death—its main focus was the relationship. The film tapped into the intense yearning of a son wanting to talk to his dad, wishing his dad could see the man he's become. "Don't Let Go," with its race-against-time crunch, ignores these deeper emotional issues, and is instead pulled into a standard dirty-cop drug-bust shady-characters-in-warehouses plot. Leaping back and forth between Jack's timeline and Ashley's leads to some confusing moments, and details which should have been hammered home early in order to get the payoff (why was Ashley's backpack wet, and who is this "Georgie" person again?) are lost in the over-complicated shuffle. The best scenes are when Jack and Ashley confirm the time-travel-glitch by sending "messages" to each other, and then figure out innovative ways to communicate. These sequences have real urgency and emotion.

Oyelowo ("Interstellar," "Selma," "Queen of Katwe," PBS' "Les Miserables") almost single-handedly grounds the film in a sense of necessary reality. There's one moment, after an early call with Ashley, when he starts laughing, in fear that he's going crazy and disbelief at the absurdity of the situation. Such a plausible reaction! Storm Reid ("Wrinkle in Time") is an indomitable figure, wildly pedaling her bike through her neighborhood, but it's her vulnerability that makes the performance, her bravery but also her devastation and fear. The challenge here is that except for a couple of scenes, Oyelowo and Reid are not onscreen together. They are voices coming through each others' phones. It's a credit to both actors that these scenes work as well as they do.

One of the strengths of "Don't Let Go" is its sense of locale. Cinematographer Sharone Meir doesn't go the normal route in filming Los Angeles. Los Angeles is often presented as a place of either the very wealthy or the very poor. It's a tourist's view of the place. "Don't Let Go" roots it in the humble and accurate reality of so many people's lives. Ashley's neighborhood feels like (and is) a very real place. When Ashley takes off on her bike through those back alleys behind the houses, you can tell she knows every twist and turn like the back of her hand.

The central relationship drives the film forward, but in its focus on "whodunit and why," "Don't Let Go" fails to pack the punch it should. 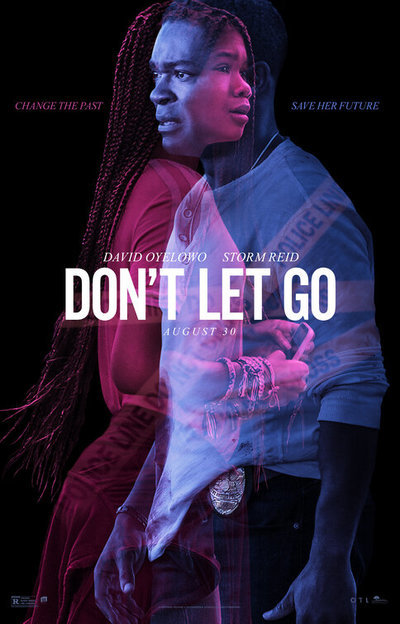