“There’s a real me without the uniform.”
—Darryl Strawberry

In 1983, Darryl Strawberry won the Rookie of the Year for the amazing season he had with the New York Mets. In 1984, Dwight “Doc” Gooden joined the same team and won the same award after a ridiculous year that included 17 wins and over 275 strikeouts. The next year, Gooden won the Cy Young and the team won the World Series in 1986. These weren’t average baseball players. They were icons. They were demigods. They were prepared to redefine the sport, dominating for a decade or more on their way to the Hall of Fame. They were also addicts, two men who fought battles against drug and alcohol addiction in a city and an era that downright encouraged it. Co-directors Judd Apatow and Michael Bonfiglio united the pair again in a Queens diner for their episode of ESPN’s excellent sports documentary series “30 for 30” called “Doc & Darryl,” airing this Thursday, 8pm CST. The two reminisce a bit, but more is revealed in one-on-one interviews with the men that focus on the real people inside the uniforms more than the fame they earned on the baseball diamond.

Darryl Strawberry came from an incredibly dark background in Los Angeles, where his father abused him on a regular basis and even threatened his family with a shotgun. He had what he calls “scars” coming into the league, when he was the #1 pick for the New York Mets. He also had one of the most beautiful and seemingly effortless swings that the sport has ever seen. But he brought the lessons of an alcoholic father to New York in the mid-‘80s, a city defined by excess. To handle the pressure of being the #1 pick, Strawberry started getting high every day. And he’d go out partying every night, even claiming he once hit two home runs with a blinding hangover. And then he discovered cocaine.

Joining Strawberry on this crazy train was the similarly preternaturally gifted Doc Gooden, a man who also had a background of addiction and pressure. His father wasn’t abusive, but he was an alcoholic, and Gooden speaks even today of the pressure in not letting down his own man when he started playing ball. Gooden had an arm like a whip, able to pinpoint a fastball in a way that seemed literally unfair. I speak from experience here, becoming a huge baseball fan in the early to mid-‘80s. I was a huge Doc Gooden fan. Like some of the interview subjects in “Doc & Darryl” (including superfan Jon Stewart, manager Davey Johnson, Tom Verducci, and co-Met Keith Hernandez) say, Gooden felt like a “once in a lifetime” pitcher. And then he discovered cocaine.

For a time, Doc & Darryl were highly functioning addicts. In fact, both men speak of the legendary ’86 Mets as a team of junkies, men who would pop amphetamines on their way out to the field so they could perform better. They were called “greenies,” and if you didn’t take them it was perceived that you weren’t trying hard enough. Two very young men in Gooden and Strawberry ended up on a team that would make them stars, but one also has to wonder if the speed and aggression of New York didn’t feed their addiction. Would they have turned out the same in Seattle?

Perhaps they would have, because “Doc & Darryl” is careful not to place blame on anyone but the two men in its title and their addictions. At a few points, Apatow & Bonfiglio almost move too quickly, especially when it comes to a rape charge (that Gooden denies) and domestic abuse (that Strawberry does not). And there are some scary chapters that the whole production seems to zip through, including a suicide attempt by Gooden and a fascinating concept, not really suggested until the end by Bob Forrest of “Celebrity Rehab” (on which Gooden appeared) that fame allows men like Gooden and Strawberry to never have a rock bottom. Gooden will always be recognized and always be cheered, even in the darkest pits of his addiction. For the record, Strawberry seems honestly happy and open (he admits things like “I hurt a lot of people”), having turned his pain into a life with the church and founding the Darryl Strawberry Recovery Center in Florida. Gooden seems to still struggle, making headlines for relapses as recently as last year, and he comes across nervous through a lot of the film—a good man still fighting the fight.

Michael Bonfiglio did the excellent 2012 chapter of "30 for 30" on Bo Jackson, so he knows a thing or two about larger-than-life sports personalities, but why Judd Apatow? Well, he’s a New York Mets fan, but there’s also an interesting line to be drawn if one considers the theme of most of his films—men trying to define themselves as lovers (“The 40-Year-Old Virgin”), fathers (“Knocked Up”), husbands (“This is 40”), etc. One can’t be a professional athlete and an addict forever, and that’s a lesson that Darryl Strawberry and Doc Gooden learned the hard way, falling from pedestals on which so many of us placed them. And they're still trying to exactly figure out their place in life and sports history.

There’s so much history between these two that just seeing them sit across from each other at a diner should be enough for most baseball fans old enough to remember when the Mets ruled the sports world (and I wanted a bit more of the actual diner conversation, to be honest). That the film about them becomes more about human frailty, regret, and—eventually—hope for the future, speaks to its excellence. 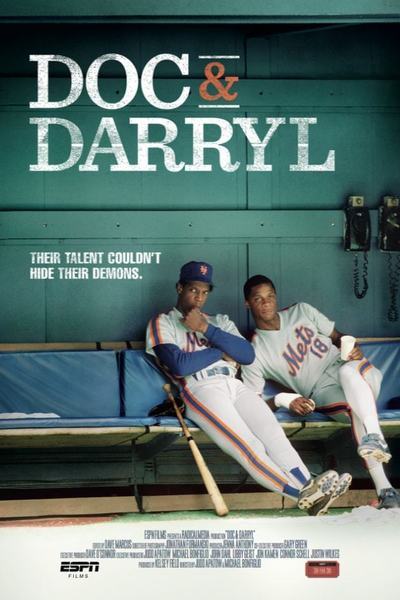 Darryl Strawberry as Himself

Dwight Gooden as Himself