Named after the Amharic word for "audacity," "Difret" tells of a crucial case in Ethiopian history, involving a 14-year-old girl and her legal rights. Walking home from school, Hirut (Tizita Hagere) is kidnapped by a group of men riding on horseback with rifles. One of them, Tadele (Girma Teshome), has decided to make her his wife, following a custom for men to abduct their brides. He locks her up in a shed, and rapes her. The next morning, Hirut escapes, but when she's cornered again she ends up shooting Tabele with his rifle in self-defense. She’s arrested, and everyone (the villagers and the corrupt men in the government) wants her to be tried as an adult, with their eye on the death penalty.

Standing up to this crazed patriarchy is lawyer Meaza Ashenafi (played stoically by Meron Getnet), who specifically provides free legal help to women who rarely have a voice in the courtroom. Along with doing everything she can to get Hirut a fair self-defense trial, Meaza ends up housing the young woman. This makes for a few touching moments in which Hirut gets to know a woman first-hand who pursued education, and eschewed expectations of matrimony and motherhood because of it. Along with a parallel scene in which the fathers of Hirut and Tabele argue about who is the victim, these scenes highlight the culture clash within the story, which could be far more interesting if writer/director Zeresenay Berhane Mehari dared to dig deeper into its true-life inspirations.

Mehari was born in Ethiopia, but moved to America to study film at USC. For his first feature, he mixes feminist courtroom drama and a coming-of-age story in which a young woman understands the world outside her village, but fails to solidify either of these narratives. "Difret" does indeed play like a first movie made by someone who can list the common ingredients in popular storytelling, but is still working on a distinct vision. It leans on the simpler narrative tools, like in how the sleazy district attorney dresses like he’s going to a club, or how characters ask expository dialogue every few minutes. There’s also some novice cinematography work, in which exposures prove an issue, leaving faces completely opaque as consistent use of nonetheless beautiful natural light proves counterproductive.

Mehari’s presentation proves far too straightforward. There is little motivating the dramatic urgency aside from covering each development, despite the social issues that make the story itself so immediate. As “Difret” is more a collection of Meaza's gutsy moves in her fight against the system, Mehari at least turns some of these segments into a necessary confrontation. “Freedom is a given right for all citizens. Yes, including women,” states Getnet, staring back at us in a gripping close-up, speaking far beyond just the Ethiopian judicial system.

Despite its central location on the battle between ingrained beliefs and what is legally right, “Difret” doesn’t have the vision to get deep into its culture clash, instead choosing to be a one-dimensional hero piece. The film has a great true story that should be told, but it shortchanges the psychological aspect of progress, in which courageous actions and convincing words influence others to think differently. "Difret" doesn’t show how a great change is made, simply that it was. 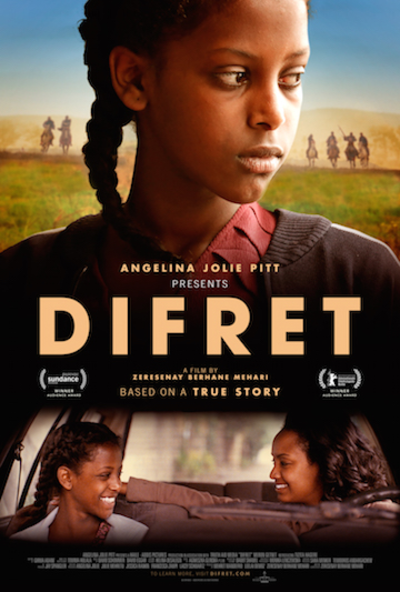