Did You Wonder Who Fired the Gun?

Travis Wilkerson’s “Did You Wonder Who Fired the Gun?” is more of a personal exorcism than a traditional documentary. In fact, it premiered as an even less-traditional film experience, playing at Sundance and other festivals as a live event, during which the filmmaker/narrator spoke in person and exalted the audience to even participate in the unearthing of racial demons. Now condensed into a cinematic experience and getting a limited release, it’s hard to shake the idea that the “live documentary” approach isn’t a little more satisfying for this material, but it’s impossible to deny the power of much of what’s on display here. Wilkerson looks at the racial discord and violence in the world around him and has the courage to examine his own legacy instead of just casting off the concept as something that happens to or is perpetrated by others. It’s worth considering how much better off we’d all be if we did the same.

Wilkerson opens by comparing his story to that of one of the most legendary literary characters of all time, Atticus Finch in “To Kill a Mockingbird.” Like Finch’s saga, this one will have a crime and a court case, but Wilkerson is quick to point out the comfort of fiction doesn’t often happen in the real world. Wilkerson’s relatives are not Atticus Finch—in fact, no one really is—and one of them was more likely to be a member of the lynch mob than the upstanding citizen who stopped them. After the George Zimmerman verdict, Wilkerson decides its time to open the closet full of skeletons in his family home and examine his own racist lineage.

In 1946, S.E. Branch shot Bill Spann. That is historical record. Branch, Wilkerson’s great-grandfather, owned a small store in Dothan, Alabama, and Spann was in the store. What exactly Spann was doing became an object of controversy, but the important thing to know is that Branch spent almost no time in jail. 70 years ago—not that long if you think about it—a white store owner shot a black man in cold blood and didn’t do any time. How did that happen? Wilkerson starts with this very simple question, and, very refreshingly, allows the answers to guide his filmmaking. This is no simple “murder mystery documentary.” At its best, it has a very organic flow, allowing us to follow the threads of personal and national history with its creator. For example, he runs into a neighbor next to the building that used to be his great-grandfather’s store and so he interviews her. He regularly shows us looping footage of Southern roads. We are on this journey with him.

Perhaps the most interesting aspect of “Did You Wonder Who Fired the Gun?” is also one that I wish Wilkerson explored a bit more in-depth, and that’s the idea of the wounds left on parts of this country by racial violence, and how there is a ripple effect, both negative and positive, to all of this. He presents shots of places in Dothan that simply look like they have history embedded in them and speaks of not being able to walk in the former store without feeling the ghosts under his feet. There are thousands of places like this in the country, places forever redefined by violence.

And then he takes this history of violence a step further, visiting nearby Abbeville, where the rape of Recy Taylor took place, and noting how that incident inspired Rosa Parks to take the action she did so many years later. What will the events of today inspire us to do tomorrow? Wilkerson breaks his film regularly to present the names of murdered men and women, asking viewers to say their names, including Sandra Bland, Trayvon Martin, Eric Garner, and more. His film isn’t as much of a call to action as a call for reflection. Yes, we can march and protest, but we will get nowhere until we look into our own histories and say the names of the people we find there.

There are times when I longed for the visceral, immediate aspect of seeing “Did You Wonder Who Fired the Gun?” in person and it’s often difficult to translate these experiences that approach performance art as much as film into something that can play in theaters. In this case, Wilkerson got most of the way there, even if a few of his bits of heated narration probably play better live. Most of all, he’s made a film that’s hard to shake. There are hundreds of movies about the racial issues that continue to divide this country, but few that feel this personal or this pleading. 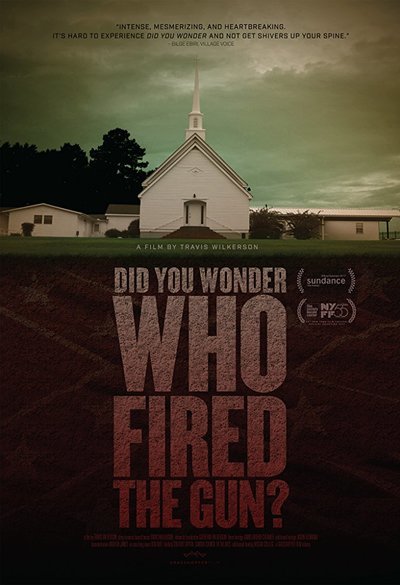