Remember the accidental email sequence in Nancy Meyers’ wonderful “The Intern”? To refresh your memory: Anne Hathaway’s overworked executive erroneously sends a cruel email to her mother and authorizes a group of her employees to break into her mom’s house and delete the message before it’s read. Now imagine that basic idea stretched to its seams to become the premise of an entire film—the whole 105 minutes of something that wishes it had clever and entertaining insights into contemporary courtships and friendships. That is more or less the gist of director LP’s agonizing, blandly shot “Desperados,” which is among the most abysmal romantic comedies that came out of this century.

The disastrous email in question is sent by neurotic Los Angeles dweller Wesley (Nasim Pedrad, “Brooklyn Nine-Nine,” “Saturday Night Live”), an out-of-work, motor-mouth guidance counselor in desperate rush to land a job and launch into a relationship with an ideal guy. Living in the trendy Echo Park neighborhood with seemingly unlimited resources (as evidenced by her well-appointed apartment) like her two best friends Kaylie (Sarah Burns) and Brooke (Anna Camp), the thirty-something Wesley goes from blind date to dead-end blind date, collects information about freezing her eggs, mourns over her dead birds and takes pride in being different. She defines herself as “an acquired taste,” except in reality, she just can’t be bothered to think situations through and say the right thing at the right time.

Take, for instance, her unsuccessful job interview at the start of the film which introduces us to Wesley with a generous side of weapons-grade cringe. In an effort to sell her credentials to a well-meaning nun about why she would be the right fit to guide their young Catholic School students, Wesley brags about her lack of experience in the field and talks about masturbation in great detail because … well, she is such a Samantha and that’s just one of her adorable quirks, to sabotage a job interview with small talk on self-pleasure. Thanks to her reliably off-putting lack of filter, Wesley also messes up a date soon enough with Lamorne Morris’ charming Sean; a bit of a mansplainer, yet still, pretty much the only character in the film that resembles a real human being. Understandably yet curtly, he cuts their rendezvous short.

Enter Jared (Robbie Amell), Wesley’s next romantic interest and enthusiastic bedfellow around whom our hopeless un-dateable decides to become an entirely different person (e.g. act like a grown-up who doesn’t always say the first thing that comes to her mind). But after not hearing from Jared for days on the heels of a great date and even better sex, Wesley, along with Kaylie and Brooke, decides to take matters into her own hands. She sends a humiliating, certifiably crazy email to Jared, only to find out moments later that he had been in an accident and stuck in a hospital in Mexico, somehow without access to his electronic devices. Already dreaming of a future of being happily married to Jared, what else could Wesley do if not travel to Cabo, break into his resort suite, and delete the email?

While comparable films of this decade such as “Bridesmaids” (a contemporary comedy classic) and the big-hearted “Girls Trip” successfully brought to life the complex individuals of their central female squads with all their chaotic ups and downs, “Desperados” shows no interest to the women’s inner worlds and relatable struggles, even though it clearly aims to capture the spirit of the above-mentioned films. We don’t get to understand, for example, why Kaylie and Brooke turn against Wesley during a trip they volunteer for by themselves, and accuse their friend of being selfish later when the self-serving reasons of the journey have always been clear. And because class and financial privilege is a glaring blind spot in Ellen Rapoport’s screenplay—a theme consistently and aptly present in both “Bridesmaids” and “Girls Trip”—the film expects us to shrug it off when the trio checks in to a swanky resort where they run into Sean and go with the flow of things when a new romance between him and Wesley flourishes.

And maybe going with the flow would have been possible had “Desperados” reserved a pair of successful laughs under its belt. But this is a film that seems to think a cat looking like Hitler, a dolphin’s penis brushing a woman’s face (yes, you read that correctly), underage sexual infatuation and a concerned mother yelling, “Stay away whorebag or I will pop you like a balloon” is sophisticated humor. Yes, this critic always craves stories centered on females in meaty roles being unapologetically messy and problematic like Wesley—a fun luxury often afforded to men exclusively. But maybe there is a way to not make it look and feel this much like an insult to women. 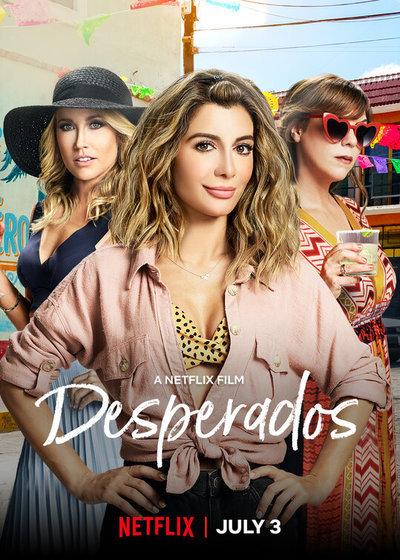