You will have noticed that I've given a "no stars" rating for "Death Wish II," starring Charles Bronson as an urban vigilante. A word of explanation. In my movie rating system, the most a movie can get is four stars ("My Dinner With Andre") and the least is ordinarily half a star (even "The Beast Within" got a whole star). I award "no stars" only to movies that are artistically inept and morally repugnant. So "Death Wish II" joins such unsavory company as "Penitentiary II" and "I Spit on Your Grave." And that, in a way, is a shame. I have a certain admiration for the screen presence of Charles Bronson. In his good roles, he can be lean, quiet, and efficient. He often co-stars with his wife, Jill Ireland, as he does in this movie, and she is a pleasant and capable actress. They were charming together in a little-seen movie named "From Noon to Three."

This time, however, Bronson and Ireland and everyone else involved with "Death Wish II" create a great disappointment. Although the original "Death Wish" (1974) had its detractors, it was an effective movie that spoke directly to the law-and-order mentality of the Nixon-Ford era. It was directed with a nice slick polish by Michael Winner, and, on its own terms, it worked. "Death Wish II" is a disaster by comparison. It has the same director, Winner, but he directs the dialogue scenes as if the actors' shoes were nailed to the floor. It has two of the same stars--Bronson and New York cop Vincent Gardenia--but they seem shell-shocked by weariness in this film. It has the same plot (Bronson's loved ones are attacked, and he goes out into the streets to murder muggers). But while the first film convinced me of Bronson's need for vengeance, this one is just a series of dumb killings.

You will remember that "Death Wish" opened with home invaders killing Bronson's wife and raping his daughter. After Bronson used himself as bait to trap and kill nine New York City muggers, he became a folk hero. Gardenia, the cop, found out who he was, but decided not to arrest him. Bronson left town, and in this film, he's in Los Angeles. The film opens with his daughter being killed, and then Bronson hits the streets again. Ireland plays the woman he loves, and who suspects his guilty secret.

What's most shocking about "Death Wish II" is the lack of artistry and skill in the filmmaking. The movie is underwritten and desperately underplotted, so that its witless action scenes alternate with lobotomized dialogue passages. The movie doesn't contain an ounce of life. It slinks onto the screen and squirms for a while, and is over. 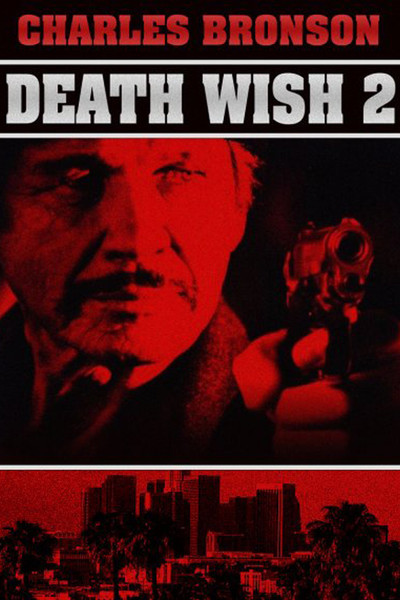