In concluding my review of “Hillary’s America: The Secret History of the Democratic Party” (2016), the previous film from conservative pundit-turned-conspiracy theorist/hack filmmaker Dinesh D’Souza, I offered the mild critique that “it may well be the single dumbest documentary that I have ever seen in my life.” Good thing that I added that qualifier “may well be” because with his latest effort, “Death of a Nation,” he has managed to outdo his earlier works to such an extent that this could be considered the “Mission: Impossible—Fallout” of crackpot cinematic screeds. In fact, the only thing preventing me from dubbing this one of the dumbest movies of any type that I have ever seen in my life is the fact that I am not entirely certain that something as shabbily constructed and artistically bankrupt as this actually qualifies as a movie in the first place.

Most people first heard of this movie back in mid-June when D’Souza announced its imminent release and stating that in it, he, in addition to his usual schtick of pinning the blame for all the ills of the world on Democrats, would be putting forth the argument that Donald Trump was the modern-day equivalent of Abraham Lincoln himself. This announcement raised many eyebrows and not just because that is a comparison that even those whose politics do lean towards the right might find difficult to swallow. It was only a couple of weeks earlier that Trump had unexpectedly granted D’Souza a pardon from his conviction for making illegal campaign contributions in 2012—the assumption being that D’Souza made a film lionizing Trump (presumably after Señor Spielbergo turned the project down) in exchange for his pardon. D’Souza claims that Trump knew nothing about the project when he granted the pardon and with nothing concrete to suggest otherwise, I will take D’Souza at his word regarding this. To be fair, however, if ever there was a movie that looked as if it had been slapped together in a couple of weeks as part of a quid pro quo agreement involving a dubious-seeming criminal pardon, “Death of a Nation” is that film.

During a montage chronicling the 2016 election, D’Souza himself admits that he was not exactly gung-ho over Trump (he barely rated a mention in “Hillary’s America,” though D’Souza brags that the film helped with his victory) but, in his never-ending quest to stay vaguely relevant, he has certainly quaffed the Flavor-Aid since then. He then concludes that montage by stating that outraged Democrats and progressives have created by doing everything they can to overturn the election, ranging from spreading “stories” about how Clinton supposedly won the popular vote to making countless claims about his personal life (“We knew we weren’t electing a choir boy”).

This, D’Souza states, is exactly the same thing that Lincoln, the first Republican elected President, faced when he took office and was opposed by a Democratic party that was indeed largely behind slavery and segregation. In D’Souza’s mind, this is apparently a mind-blowing revelation (even though he has made it in his last couple of movies) that history has tried to keep silent from the American people, presuming that they never actually crack a history book. Now some of you may be thinking that this thesis makes no sense because the Republicans and Democrats essentially switched positions over the years, especially in the wake of the battle for civil rights in the 1960s. This might seem like an enormous oversight, even for a guy who somehow did not realize that he was retweeting messages that included the hashtags #killthejews and #bringbackslavery, but D’Souza has a simple explanation for this—nothing changed, Democrats and progressives continue to be racist monsters and Republicans—the same group actively trying to block black voters from getting to the polls—are the real anti-racists.

The ensuing film is D’Souza’s usual stew of cherry-picked facts, overt omissions, inept historical reenactments, slanders, innuendos, stuff taken from his earlier movies, shots of him walking pensively through empty areas and clips from other and better movies. Perhaps realizing that he has gone to the well with pinning the Civil War and slavery on Democrats, D’Souza expands here to talk about the influence that the Democratic party had on a budding young Austrian by the name of Adolf Hitler, who, according to this film, learned everything he knew about genocide, directly from Jacksonian Democrats. In America, this was all celebrated by progressives and Democrats, especially since Hitler’s true purpose was the eradication of Christianity, and they would continue to celebrate his beliefs after the war in ways ranging from supporting abortion rights (turns out Mengele performed illegal abortions in South America after escaping Germany) to gay rights (apparently most Nazis were gay). “Read the Nazi platform at the Democratic convention and it would most likely receive thunderous applause,” D’Souza intones, in case someone out there has yet to get the point.

“Okay,” you might ask, “but what about something like the horror of Charlottesville?” Well, unlike Trump, who tried the “both sides” argument, D’Souza blames it all entirely on progressives and Democrats once again. How does he swing that? He interviews white nationalist Richard Spencer and twists things around until Spencer states that he feels that he has a “white Malcolm X philosophy” and that “I guess I’m a progressive.” When he tries to talk to Jason Kessler, the organizer of the Charlottesville rally, who he has tried to claim is a CNN employee, an Obama supporter and a member of the Occupy movement (claims that have been discredited), he gets nothing but a load of racist invective. In voiceover, D’Souza smirks “He still seems to be part of the Occupy movement.” Meanwhile, “Trump is a flag-waving patriot who cherishes the American founders” trying to run the country despite the efforts of the Deep State to run him out of office for no reason whatsoever. (Needless to say, the countless scandals surrounding the administration are not even mentioned here.)

As badly as “Death of a Nation” fails as history, it's even worse when judged on cinematic terms; he and co-director Bruce Schooley have really outdone themselves here, if that is quite the right phrase to describe it. The whole thing has been put together with the kind of style and flair that would barely pass muster on YouTube, the historical reenactments are remarkably lifeless (with the actors playing Lincoln and Hitler coming across so poorly that they seem barely capable of leading lunch orders, let alone nations), and it drags so badly that it feels as if it is covering 200+ years of history in real time. The most incompetent parts of the film are the interviews that D’Souza conducts at a few points. For the most part, they have been filmed and edited in such a haphazard manner that you get the weird sensation that he and his subject were either never in the same room together or the talks were wildly edited at some point. (The only interview where you get the sense of an actual conversation being captured comes when D’Souza spends several minutes practically fawning over disgraced right-wing activist and Project Veritas head James O’Keefe.)

In theory, “Death of a Nation” is the kind of cheesy and exploitative pseudo-documentary that exists for no other reason than to allow D’Souza to grab more money from the gullible, using arguments about race that ring hollow when coming from the guy who once wrote "Was slavery aracist institution? No. Slavery was practiced for thousands of years in virtually all societies … Thus slavery is neither distinctively Western nor racist” and "Am I calling for a repeal of theCivil Rights Act of 1964? Actually, yes. The law should be changed so that its nondiscrimination provisions apply only to the government.” Will it make money? Probably—he has a devoted following that will lap up anything that he has to offer that will make them feel better about their own prejudices. As a film, it is pure garbage from first frame to last, though as a document chronicling the devolution of conservatism from a movement of ideas and substance to little more than base trolling and fear mongering, it could well be of service to future historians struggling to make sense of our current madness. 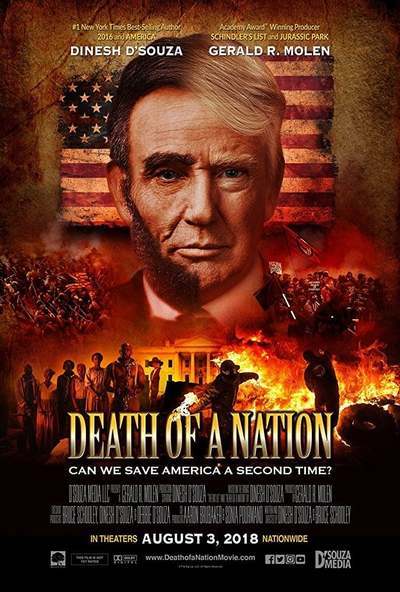 Dinesh D'Souza as Himself

Angela Primm as Herself - Soloist