The nightingale’s song has long been described as one of the most beautiful sounds in nature, and perhaps thanks to the Greek myth of sisters Philomela and Procne—who were transformed into a nightingale and a swallow by the gods after exacting revenge against Procne’s rapist husband—the bird itself has often been considered female. The reality in nature, though, is that female nightingales can’t sing at all. Whatever forces of genetics, biology, and science combined to give the male nightingale the ability to sing also denied the female that same skill.

Take that ornithological observation and apply it to humanity, and you have the incredibly bleak perspective of “Death and Nightingales,” the miniseries adaptation of Eugene McCabe’s acclaimed novel. Writer and director Allan Cubitt follows pretty much all of McCabe’s novel’s beats in this three-part limited series (premiering on Starz on May 16), crafting a story about secrecy and betrayal, colonialism and nationalism, and patriarchy and oppression in 19th century Ireland. Kudos to Cubitt for not stretching this story past its natural point—three episodes feels just right—and for casting a mostly strong trio in Ann Skelly (of “The Nevers”), Matthew Rhys, and Jamie Dornan. But a few of these character turns are so predictable that certain reveals lack impact, and various scenes have dialogue so superfluously flowery and overwritten that the performers dive headfirst into inorganic theatricality. Skelly is surprisingly hard-edged, Rhys is a fantastic yeller, and Dornan is quite pretty when he broods. “Death and Nightingales” ultimately underserves them, though, with a narrative you can guess at within the first 30 minutes of “Episode 1,” and with only few cinematographic or editing flourishes to complement this fairly conventional story.

Set in County Fermanagh, Northern Ireland, over the course of one July day in 1885, “Death and Nightingales” is told from the perspective of 23-year-old Beth Winters (Skelly), stepdaughter to Billy Winters (Rhys), owner of the Clonuala estate where they both live. Three hundred years and six generations ago, Billy’s Protestant, British family helped invade and colonize Ireland, and used fur pelts stolen from the French to secure their fortune in gold. Since then, Billy’s family has served as landlords for the land around Clonuala, and he also owns the local rock quarry, from which practically everyone in the area—including Roman Catholic Bishop Jimmy Donnelly (Seán McGinley), on the other side of the religious divide as Billy—has to buy their stone. Billy seems to hate this place, but it’s also sustained his wealth, which has made him stingy, demanding, and cruel. And while he tells Beth that he loves her, some of the ways in which Billy acts upon that love are not how a stepfather should behave with his daughter.

Beth, for her part, loathes Billy; Skelly radiates that hatred through her aggressive body language, all unblinking stares, set jaw, and raised chin. She hates how Billy abused her Catholic, Irish mother (Valene Kane) before her death; she hates how Billy has transformed her into a workhorse by looming her potential inheritance over her head. While he gets blackout drunk nearly every night (and some days), she tends to their cows and other animals, she cleans and helps cook, she churns butter and helps her maid Mercy (Charlene McKenna), one of the estate’s few workers. Why should Billy hire another person when Beth is there? It’s not like she’s his biological daughter. If she wants to stay, she has to earn her place.

It’s a grueling, terrible life of tedium and fear for Beth, until a potential white knight arrives: the incredibly handsome Liam Ward (Dornan), a tenant on Billy’s land who works at the quarry. When he invites her over for tea in his cabin, in which hang a portrait of Jesus and an imagining of a group of devils, Liam wisecracks to Beth of that painting, “Longtail lads look to be more fun.” He’s Catholic, like Beth, and he hates Billy, like Beth. As a supporter of Irish independence, he thinks men like Billy, gentry representatives of the Crown, should all be wiped out, and their land and money reclaimed for the Irish natives. “Killing’s a small thing,” Liam says to Beth, and Dornan says that line with enough gentleness that it almost sounds like mercy, rather than the threat it actually is.

Who will Beth choose: the man who sort of raised her, or the man who says he wants to save her? “Death and Nightingales” spends a serviceable amount of time developing Beth and Billy’s relationship with flashbacks to her childhood, during which Billy vacillated between barely tolerating her and treating her terribly, and through conversations with Mercy, who knows that something isn’t quite right with how Billy treats Beth. The challenging, defiant way Beth speaks to Billy helps us understand how her resentment is reaching a boiling point, and Rhys’s reactive performance is like Philip Jennings from “The Americans” dialed up to 11. The man remains exceptionally good at losing his temper, and his and Skelly’s accents are gorgeously mellifluous even as they’re screaming at each other.

But where “Death and Nightingales” falls down is in sketching the Beth and Liam pairing, which is supposed to be life-changing enough for Beth that she considers abandoning everything she’s ever known for this man. Whether through the underwriting of Liam, how the series overly hypes him up (“He’s evil, or near it,” Donnelly says of Liam), or Dornan’s perhaps too-low-key performance, something about his corner of this triangle doesn’t work very well. That, in turn, means that the second half of this series suffers from, “Girl, what are you doing?” syndrome, in which a protagonist’s actions are so obviously the wrong choice that all believability goes out the window. Once “Death and Nightingales” makes that character turn for Beth, it never quite rights itself.

There are beautiful visuals, though, among all this misery: Skelly looking up from reading a book of poisons to stare directly into the camera, and at us; an overhead shot of a boat slicing through the uninterrupted blue of the loch between the Clonuala estate and Corvey Island, Beth’s mother’s dowry which passed to Beth when she died. Cinematographer Stephen Murphy is thoughtful with his lighting and compositions, keeping our eye on Skelly’s Beth during a nighttime sojourn into the estate’s sprawling fields and a later wandering through a forest. While Skelly’s performance in that soliloquy scene borrows too much from Hamlet’s Ophelia, Murphy reminds us of the character’s isolation and pressure by emphasizing the tall trees and lush greenery upon which she is trespassing. And the score from Gerry Diver and David Holmes is very reminiscent of Randy Edelman and Trevor Jones's work for Michael Mann's “The Last of the Mohicans,” which is never a bad thing.

It’s difficult to say, though, who would be drawn to “Death and Nightingales” aside from already-existing fans of the source novel. If you’re unaware of the tensions between the British and Irish and Protestants and Catholics, the first episode of the miniseries might be impenetrable, while the final episode, which digs deep into the effects of those myriad differences on people’s identities and ambitions, might bore. The performances are mostly strong, but the subject matter is so dense, the cultural and religious details so complex, and the affection toward melodrama so unrepentant that “Death and Nightingales” slides into tedium disappointingly often.

Whole series screened for review. “Death and Nightingales” premieres on Starz on May 16. 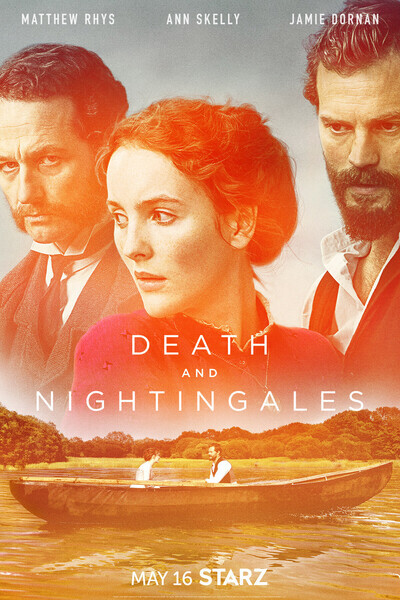