My biggest fear going into "Dear Mr. Watterson" had to do with the reclusive nature of its subject, "Calvin and Hobbes" creator Bill Watterson. Here's a cartoonist whose work was beloved by millions, yet he chose to avoid the spotlight. I feared a repeat of the abysmal "Salinger," with its numerous talking heads rambling on about how their love of the author fueled their stalker tendencies. Thankfully, no interviewee in "Dear Mr. Watterson" attempted to seek him out, then whined about the subsequent rejection; unfortunately, many of them still ramble incessantly about how much they love "Calvin and Hobbes."

I was never a fan of these "love-a-thon" style documentaries, even if I love the subject as well. I'm especially irritated if, like in "Dear Mr. Watterson," there are elements of interest that could have been expanded to fill the time taken up by the gushing talking heads. Director Joel Allen Schroeder assembles an impressive list of cartoonists and historians. Surrounding these subject matter experts are lots of regular people whose goal seems to be padding out the running time. As they discuss "how much this strip meant to me," I got the sense that "Dear Mr. Watterson" was as uninterested in them as I was; they're not even identified.

Schroeder tells us what "Calvin and Hobbes" meant to him as well, but that's fine. This is his movie. As our narrator and guide, Schroeder takes us to places like the Cartoon Museum and Ohio State University, where Watterson loaned the drawings of the strips he made during "Calvin and Hobbes'" 10 year run. He also takes us to Chagrin Falls, Wisconsin Ohio, Watterson's home town and the model for the town his characters inhabit. On the back of one of the compilations of "Calvin and Hobbes" strips is a picture of a giant Calvin performing a Godzilla-like stampede on the town. The Chagrin Falls bookstore owner discusses just how obsessively accurate Watterson was in his drawings, even pointing out where the bookstore is located in the picture. Schroeder responds that, when he drove into Chagrin Falls, it felt like being absorbed into Calvin and Hobbes' universe.

So who were Calvin and Hobbes? They are, respectively, a spiky-haired six-year old boy and his stuffed tiger. On the surface, Calvin has Dennis the Menace-type characteristics (Schroeder's mom cites this as the reason she didn't allow him to read "Calvin and Hobbes"), but Watterson shows Calvin to be a very imaginative, even philosophical, little boy. Childhood imagination propels the gorgeously drawn strip, with Hobbes coming to life only in Calvin's eyes. Hobbes is part Jiminy Cricket, part co-conspirator and, at times, the voices of reason and counterpoint. Their adventures include numerous toboggan rides; interactions with Susie, a little girl whom Calvin pelts with snowballs, and dealings with Miss Wormwood, a teacher Calvin constantly envisions as an alien.

Even if you've never read "Calvin and Hobbes," you're probably familiar with Calvin. He's the peeing kid you see on car windows. Those window overlays, illegal knockoffs of course, get mentioned in the section of "Dear Mr. Watterson" pertaining to the commercialization of comic strip characters. This is the best part of the film. Watterson famously refused (and continues to refuse) to license his characters, and although Universal Press Syndicate could have overridden him, they've adhered to his wishes. I wanted to know why, but never received an answer from the Universal Press talking heads.

"Dear Mr. Watterson" then shows the two most famous examples of ubiquitous comic strip character media saturation: the "Peanuts" gang and Garfield. Good ol' Charlie Brown is represented by Sparky Schulz's widow, Jean, who explains how her late husband executed control over use of his creations. Garfield's creator, Jim Davis, is nowhere to be found, which is a missed opportunity. I would have loved to hear his opinion on the most egregious use of his characters, the prophylactics I found with Odie the dog on the package. (Yeah, I bought 'em.)

"Would you want Snoopy selling you insurance?" asks one cartoonist. It's a great question, and an entire documentary could be made from it. What's here is choice material, with Stephan Pastis, creator of "Pearls Before Swine," delivering a long, compelling speech that's almost worth the price of admission. Schroeder lets him talk without interruption, and Pastis offers his theory on Watterson's decision as well as his own personal tale of marketing his own characters. "You have to deal with people with ideas you don't like," he says, "people who make your stomach hurt."

Berkely Breathed, creator of the comic strip, "Bloom County," with which I was obsessed during my college years, also chimes in on selling one's characters. Referring to himself as the yang to Watterson's yin, Breathed talks about mass marketing "Bloom County" and the letters he received from Watterson. "Comics always draw on their letters to one another," he informs us. Watterson's disapproval of Breathed's handling of Opus and company is shown in one letter as a humorous, sinister series of panels depicting Breathed as a sell-out.

"Dear Mr. Watterson" also touches on whether comics count as high art. In one strip, Calvin and Hobbes discuss them as a "low form of art." At Ohio State, we see how delicately Watterson's drawings are handled. To the library, this is obviously important artwork. Schroeder puts on white gloves and the librarian gently hands him these large canvases. The contrast between the size of what was drawn and how it appears in the paper is striking. The ever-shrinking comic strip space is offered as a possible reason why Watterson decided to end "Calvin and Hobbes" in 1995.

One of the pieces Schroeder requests is his favorite comic strip. "Dear Mr. Watterson" is surprisingly stingy about allowing us to see and absorb Watterson's panels. They're presented almost as teasers, as if the filmmakers could only afford to show them for two seconds. As others describe their favorites, we are treated to similarly inadequate, quick glances. I was frustrated to the point of rewinding the screener and pausing it so I could take in what was being described. In a theater, you won't have this luxury.

You didn't ask, but my favorite "Calvin and Hobbes" is one I still think about today. In it, Calvin wakes up and goes through his entire day. He deals with his daily routine, including Miss Wormwood at school and other aggravations, and then, just when his day is over, he wakes up. The entire thing has been a dream, and he must now go through the exact same thing all over again. I'm sure you've had days that felt like this. That I remembered this strip almost 20 years after I'd read it is a testament to Watterson's work. It deserves a little better than what we get in "Dear Mr. Watterson." 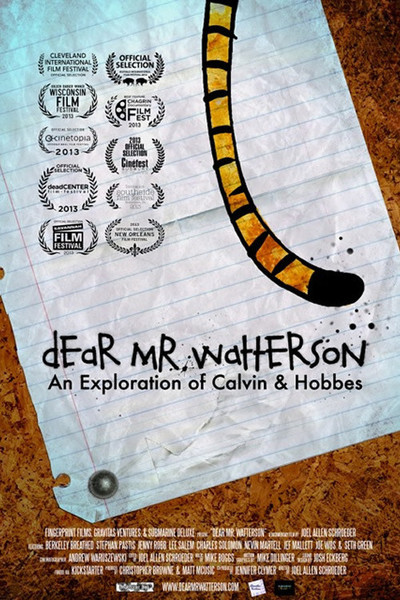 Seth Green as Himself