David Brent: Life on the Road

Devotees of David Brent, the foot-in-mouth comic antihero of the original BBC version of "The Office,"  will watch the quasi-musical road film "David Brent: Life on the Road" no matter what this review has to say about it. But it's still a bit of a shame that this movie doesn't have more to offer than one more go-round for a great character, a bigoted twit who has delusions of musical grandeur but knows deep down how limited he is.

David, of course, is the creation of writer/director/actor Ricky Gervais, who memorably portrayed him on the original series and a follow-up TV movie and has continued to bring him back around occasionally since then, to make guest appearances on the American TV spinoff of "The Office," on concert stages, and in the popular YouTube series "Play Guitar with David Brent." This film, which premiered last year, doesn't have much to add beyond a few biographical details.

David has somehow landed a sales job at Lavichem, a chemical company. Introductory glimpses of David in the presence of coworkers confirm that he has softened a tiny bit, more due to suffering a string of defeats than by conscious choice, and fights a mostly losing battle to avoid offending everyone in sight by blurting out every thought he has at the instant that he has it. There's inappropriate sexual innuendo galore, and David and a coworker do a "Chinaman" impression at one point; Gervais cuts periodically to bystanders marveling that such a pathetic person could exist, much less have a decent job that places him alongside adults who can function in reality without continually offending each other. Another coworker explains that Brent is "like a kid ... he wants attention ... you see a man that age and you thinking, 'What are you doing?'"

The original "The Office" made an art of eating its cake and having it, too, pointedly criticizing David's ignorance and thoughtlessness while deriving a comic thrill from seeing how dreadful his remarks could get and how he could push his luck without self-destructing. "Life on the Road" offers no such thrills because David is so far down that he has nowhere to go but up, and there are many moments where the film seems determined to make us flat-out love the guy even though there's nothing lovable about him except his suffering, all of which is self-inflicted.

David embarks on a self-financed tour with a hired-out band of musicians, performing "Ooh La La" and other chestnuts for audiences of half-interested, often aghast patrons, falling down onstage, and somehow wrangling a radio interview that fails to mention his gig that night. The film is quite repetitive, essentially a very long sketch, and offers little in the way of character development for supporting players. In contrast to the original "The Office," everyone else is there mainly to stare in shock at David as he offends people or does something stupid. There's also the disquieting sense that the entire project exists so that people can get a nice, long opportunity to hear Gervais sing and think, "Wow—you know, this is a joke, but he's actually not bad." 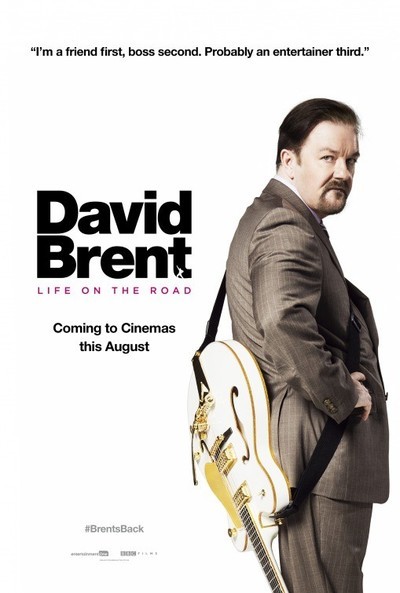