In February 2015, Ukrainian ballet superstar Sergei Polunin appeared in an emotionally raw music video for the huge Hozier hit “Take Me to Church.” The clip, which famed photographer David LaChapelle shot in Hawaii, featured Polunin dancing in a stripped-down space in ripped, nude tights, his sinewy body covered in the tattoos he usually has to hide with makeup to perform the classic roles.

The choreography revealed a conflicted dancer’s torment; the melody inspired a gifted artist to soar. And the fact that LaChapelle shot so much of the performance from low angles—with heavenly streaks of sunlight streaming through open windows—made Polunin’s leaps seem to last even longer. If you’d never seen or heard of him before this, you could never forget him afterward. His combination of explosive power and aerial prowess made the video go viral, and as of this writing it’s amassed nearly 16 million views.

But Polunin intended “Take Me to Church” to serve as his swan song, even though he was only 25. Having reached the heights of ballet at an astonishingly young age and realizing his heart no longer was in it, the media-hyped “bad boy” considered this shoot a farewell to the art form that brought him fame and acclaim.

Trouble is, the video made him even more popular. And that’s where documentary “Dancer” comes in: to explore the paradox of having it all and still not feeling satisfied.

Director Steven Cantor provides intimate access to Polunin in all his shadings, from playful to petulant. (Cantor knows a little something about challenging celebrities, having previously co-directed the excellent Pixies documentary “loudQUIETloud,” among many others.) He also benefits from the fact that video technology has been available throughout Polunin’s life—despite a childhood spent in poverty in southern Ukraine—so we see footage of him training to be an Olympic gymnast at age six, then pirouetting longer and jumping higher than the other boys in his ballet classes as a pre-teen.

Cantor also speaks with Polunin’s parents and grandmothers, all of whom are matter-of-fact about splitting up the family and moving to different countries for work to help nurture their prodigy. While they were united in their love and support of their son, his parents ended up divorcing over the geographical divide. At 13, Polunin moved on his own to London to study with the British Royal Ballet School without knowing a word of English; at 19, he became the Royal Ballet’s youngest-ever principal dancer.

But by 22, he walked away from the company, feeling restrained by the routine. He had plenty of friends—video clips show them partying hard well into the night, and tabloid reports wallow in tales of his wild ways—but his sense of isolation is obvious. And the same swagger that makes him sexy and seductive on stage makes him demanding and dismissive off of it.

Who Polunin truly is and what drives him remain somewhat elusive in “Dancer,” though. Maybe that’s the point, or maybe those sorts of things are difficult to pin down as Polunin himself continues to forge an identity of his own. But it’s the one element that makes this documentary feel like a less-than-complete experience.

Cantor deserves credit, however, for tracking the self-destruction without gawking or clucking; he seems to feel sympathy for this frustrated artist in flux. Unlike so many movies about ballet, “Dancer” isn’t about the toll such discipline takes on the body. It’s about the toll it takes on a life.

But still, there is the dancing. Good lord, does he dazzle. Seeing how freakishly gifted he is and watching his ascendance is a thrill, and Cantor keeps the pacing moving crisply. And there is an emotional underpinning, as well. While the film reveals unmistakable traces of remorse in Polunin’s more recent interactions with his mother, who sacrificed everything for him, it ends on a note of uplift. Despite the rage of the “Take Me to Church” video, “Dancer” suggests there’s hope for happiness yet. 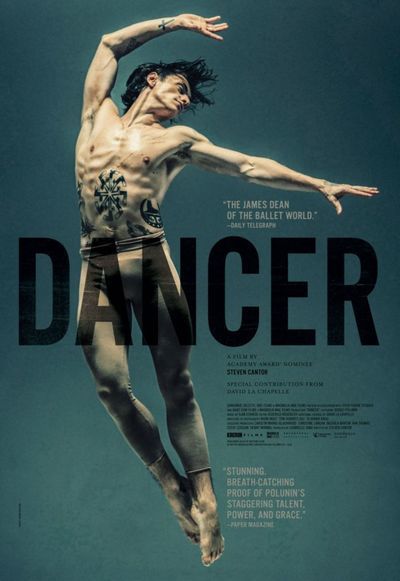 Sergei Polunin as Himself