This movie is a tricky proposition for this reviewer, who also reviewed the first “Daddy’s Home” movie back in 2015. The good news is that I found the sequel better than the original—the writing sharper, the jokes fresher and smarter, the comic interaction between the lead characters consistently engaging. I mentioned this to my incredulous wife, who said, “So you’re saying it’s the ‘Godfather, Part 2’ of the ‘Daddy’s Home’ series.” I’m not sure if she was being sarcastic or not.

Here’s the tricky part. One reason I wasn’t crazy about “Daddy’s Home” was the relentless onslaught of “edgy” jokes in bad taste. This picture tones that down. There are, indeed, fewer jokes at the expense of kids in wheelchairs, and of dogs with open sores and mange. This, to me, is an improvement. But what if you, the reader, actually LIKE jokes about handicapped children and disgustingly pitiable sick dogs? You see the problem.

As for what “Daddy’s Home 2” does have, it’s an expansion of the family dynamic of the first film, which anyone familiar with the “Meet the Parents” films will recognize as an added-star-power strategy. In the post “Daddy’s Home” alliance between cool-bro dad Dusty (Mark Wahlberg) and winsome wimp stepdad Brad (Will Ferrell), a little discontent must fall. Here it arrives in the persons of granddads. Dusty’s pop is alpha-male ex-astronaut Kurt, played by Mel Gibson. Brad’s dad, Don, is a motormouth ultra-limp noodle with a liking for improv comedy, played by John Lithgow. Both granddads arrive at the airport simultaneously, and macho Kurt, who hasn’t seen Dusty in years, is hard-pressed to contain his disgust at the “co-dad” arrangement Dusty and Brad seem so happy in.

Surely the two very different personalities still, as one of the characters puts it, “harbor” some resentment toward each other. (The use and misuse of the word “harbor” becomes a semi-running joke, an almost sophisticated bit of linguistic humor that would absolutely not have floated in the first film.) Kurt is at first passive-aggressive—renting a house near a ski resort to better facilitate a “together Christmas” in the hopes of driving a wedge into Dusty and Brad’s relationship—and then just aggressive, encouraging one of Dusty’s biological children to take up turkey hunting. There are scenes in which both the two dads and the two granddads offer advice and strategies on ten-year-old or so Dylan’s emerging interest in girls, and later his ineptitude at bowling. Brad’s own slapstick ineptitude is highlighted when a runaway snowblower destroys a Christmas decoration display. It’s all pretty amiable and funny, and further intrigue is provided by Dusty’s new wife, Karen, a snooty author with supermodel looks and a snootier daughter, Adrianna, an age peer of Dylan and Megan, Dusty’s kids by Linda Cardellini’s Sarah. Cardellini is given a little more to do in this picture than the first one, and that’s a plus too.

“You’ll laugh,” a friendly publicist assured me on my way into the theater, and I did. Not a huge amount, but enough that I have to adhere to our founder Roger’s rule of comedy assessment, which, most simply put, is that if a comedy made you laugh it did its job and you can’t front about it. I do have to admit I laughed a little less many of the times Gibson was on screen. I praised his work in last year’s tough action thriller “Blood Father,” in which he was very credible as a former criminal struggling with his demons as he tries to protect a wayward daughter. But watching him try to play a bullying character for laughs here left a bad taste in my mouth. His character here is a relentless womanizer, consistently targeting younger women. Knowing how this guy reacts in real life when he feels crossed by a younger girlfriend made it difficult for me to be amused by his portrayal of a grandfather who attempts to entertain some ten-year-olds by starting a joke “So two dead hookers wash up on shore…” And so on.

Your mileage may vary, and I’m sure I’ll hear about how it does in the comments. 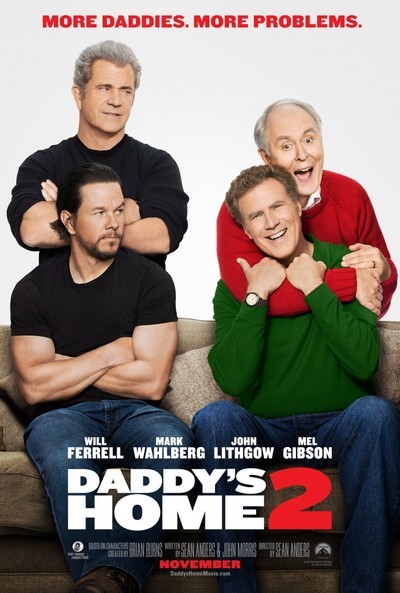 Rated PG-13 for suggestive material and some language.

Will Ferrell as Brad Whitaker