When Mel Gibson was first becoming known as a film actor, he had a lot of obvious things going for him: acting talent, good looks, ruggedness, a charisma that could land on either side of “sly” or “menacing.” In other words, arguably, all the stardom requisites. But he was interesting beyond that, because of the movies he was in. Pictures such as “Mad Max” and “The Year of Living Dangerously” were debatably genre pictures but they had energy and intelligence that was way beyond generic. It seemed also that Gibson had meaningful alliances with the makers of those films, directors George Miller and Peter Weir. Whether it was just happenstance that all these guys were coming up in the Australian film industry at the same time or if Gibson himself was indeed a more-discriminating-than-average film actor didn’t matter; it looked good. And when Gibson made his big-Hollywood move in “Lethal Weapon” he did, although it’s tough to really remember it properly now, play a pretty odd variant of the risk-everything-cop-hero.

I don’t need to rehash the personal explosions perpetrated by Gibson that, among other things, put his career in a kind of purgatory. I can infer, though, that a casual Gibson follower discovering that this week he stars in an action thriller called “Blood Father” might himself infer that Gibson is working his way out of that purgatory via the Nicolas Cage route of hastily conceived and assembled shoot-em-up hackwork. I am pleased to report this is not actually the case. Clocking in at a fat-free 88 minutes, “Blood Father,” directed by Jean-François Richet (the man behind the Vincent Cassel gangster epic “Mesrine”) is an efficient and pleasurable bad-man-tries-to-go-good exposition that gives Gibson ample opportunity to flex his now-somewhat-grizzled movie-star muscle.

The movie opens with a shot of a young girl in a missing-person’s flyer, then cuts to a shot of a retail-market conveyer belt moving lots of boxes of bullets, and finally a pack of bubblegum. The young woman buying the stuff, Lydia (Erin Moriarty) is the girl from the flyer; when she asks that a pack of Camel Lights be added to her purchase, the cashier asks her for proof of age. Get it? Fortunately that’s the movie’s first and last venture into coy “Ain’t That ‘Murica?” humor. Lydia delivers the ammo to a car full of her shady pals, including a slicked-down Diego Luna, and they’re off on a pretty bad misadventure.

Cut to a closeup of Gibson, his very lined face partially covered by a very full beard, making a confession in an AA meeting. Gibson’s ex-con John Link is two years sober, has a vigilant sponsor named Kirby (William H. Macy), and runs a tattoo parlor out of a big trailer in a very sparsely populated California trailer park. And on the corkboard at the entry of the trailer is, yep, that missing persons flyer with young Lydia’s picture on it. So you know who’s going to be on the other end of the line when the phone rings.

“Blood Father,” written by Peter Craig and Andrea Berloff from a novel by Craig, avoids—at least for the most part—the clichés of the father-protects-daughter thrillers made famous by Liam Neeson by giving the daughter a little bit of bad-apple-ness, or bad-assness, herself. She’s in a bad situation and she’s also hooked on drugs and alcohol, so once Link swoops in to take her under his wing he’s also got a rehab project to tackle. On top of which he’s not a man of means—there’s no arsenal stashed under the floorboards of his trailer. For a time he’s got only his wits to live by, and those have been somewhat scrambled by his life circumstances, not to mention the sudden reunion. It’s refreshing to hear father and daughter cuss each other out and have neither one pause to make a remark about bad manners—they both speak the same profane language. Which isn’t to say Gibson’s character is any kind of permissive dad. When Link and Lydia check into a motel together, a google-eyed young clerk (Thomas Mann) asks conspiratorially, “Where’d you find her?” “In the delivery room,” Gibson shoots back, implying with mere tone and speed all the ways he’d kill the other guy if given an excuse.

Just as the movie could use an infusion of villainy, Michael Parks turns up as a former criminal associate of Link’s who now sells Nazi memorabilia online from his desolate ranch, and Parks makes a meal of the part. The movie builds up a good head of steam before delivering a very satisfying wrap-up, and the twist in the climax feels legitimate because Richet lets the audience understand that Link’s playing the only card he’s got. Make what you will of how much Gibson’s performance draws from his own wrestling of personal demons; suffice it to say that the line “You can’t be a prick all your life and just say never mind” has a sting that wouldn’t be there in a movie he wasn’t starring in. 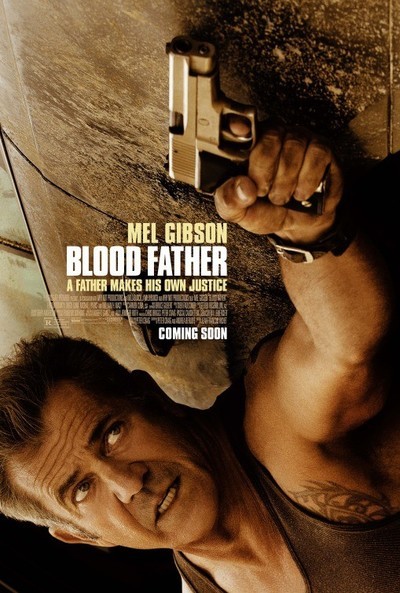 Rated R for strong violence, language throughout and brief drug use.