“Cryptozoo” is an unusually timid animated fantasy that looks like outsider art, but often moves and sounds like bad pulp fiction. Indie comics artist turned writer/director Dash Shaw worked with animation director Jan Samborski to apply his trippy drawings to a generic fantasy about cryptids, which an opening title defines as an “animal whose existence is disputed or unsubstantiated.”

In Shaw’s movie, a group of monsters and monster-loving allies try to locate a rare beast called a bakku so that it can be sent to the Cryptozoo, a Jurassic Park-type sanctuary for imaginary creatures, like a griffin, some unicorns, a giant snake, etc. The good guys are led by army brat Lauren (Lake Bell), and are chased by Nicholas (Thomas Jay Ryan), a stuffy military guy who dislikes cryptids because “people fear what they don’t understand,” as one crytpid says gravely later on. Nicholas also tells Lauren that “we’re not so different.” So “Cryptozoo” is that kind of tacky, though it’s easy to assume otherwise given Shaw’s unique style of drawing and design.

There’s a little more to Lauren’s story, but not much more. She wants to find the bakku because, when she was a child, it used to eat her dreams with its anteater-like trunk. So Lauren teams up with Phoebe (Angeliki Papoulia), a shy gorgon, and Pliny (Emily Davis), a freakish-looking humanoid with a childish face on his chest. There’s no real urgency to Nicole’s bakku quest since “Cryptozoo” has a pothead dream logic that makes it weirdly serene even when Nicholas is threatening to shoot and/or imprison the kinds of monsters you might find in the back pages of some “Dungeons & Dragons”-obsessed kid’s notebook.

“Cryptozoo” might have been more compelling as a collection of static loose-leaf drawings. Shaw’s linework is crude, but he’s also very detail-oriented when it comes to his characters’ ungainly bodies and unnatural features. Like a lot of contemporary indie comics artists, Shaw’s style is somewhere between the underground comix of the 1970s and the superhero comics of the 1960s. That deliberately unbalanced sensibility can be pretty endearing, even if it does often make one wonder why such bizarre-looking characters would ever move or speak like refugees from a formulaic 1980s scifi movie.

Shaw’s characters shuffle across the screen, and when they speak, their oversized lips noticeably stretch their inarticulate faces out of proportion. They also talk like they’re auditioning for the next X-Men movie, like when Phoebe complains to her whiny fiancé Jay (Rajesh Parameswaran) as he agonizes over their upcoming wedding’s seating plan: “At least you have a family. I don't, because I'm a cryptid.”

Shaw’s characters also sound like uncomfortable professional voice actors, and look like a bored art school student’s pet project. Nicole has the imposing dimensions of a Rubens woman, the chin of a Disney witch, and the curves of a Frazetta heroine. As for Nicholas: his eyes are enormous, his forehead's got folds like a midwesterner, and his chin looks like a butt. Then again, if that's how they’re supposed to look, then that's how they’re supposed to look.

"Cryptozoo" is full of such deliberately unglamorous artistic choices, which at least make sense within the context of a cynical plot about post-Summer-of-Love disillusionment. Shaw's film is only awkward when its characters have to move like people, let alone the subjects of a storyboarded fantasy full of blasé master-shots of malformed beasts. There’s no internal harmony to Phoebe and Nicole and Nicholas’ movements, just a lot of twitching that’s occasionally interrupted by stiff dialogue like “I just worry that the outside world is never going to accept us” and “You gonna sit around, gettin’ stoned, like everyone else?"

“Cryptozoo” is sometimes charming though, especially when Shaw’s characters are reduced to moving parts in a psychedelic collage. In a characteristically impressive (and seconds-long) scene, the various theme-park stations of the Cryptozoo are visualized as parts of a kaleidoscope. Nicole, Phoebe, and the others tramp across the screen and talk about how each Cryptozoo area has its own “culturally appropriate” food. Decoupage-ready images of ramen, tacos, and pizza are super-imposed over lapping illustrations of the cryptids’ respective habitats: sky, forest, mountains, sea, etc.

Scenes like this prove that Samborski and Shaw are a lot smarter than their characters sound. But “Cryptozoo” is ultimately only as thoughtful as it looks and sounds, and it’s mostly composed of scenes where odd-looking drawings move and talk without depth or grace. That can be effectively alienating, and maybe even read as a parody of indie art’s inevitable descent into pop clichés. Unfortunately, much of “Cryptozoo” feels like an earnest, flashy genre exercise that’s more eccentric than thoughtful. It looks great on paper, but not so much on a screen. 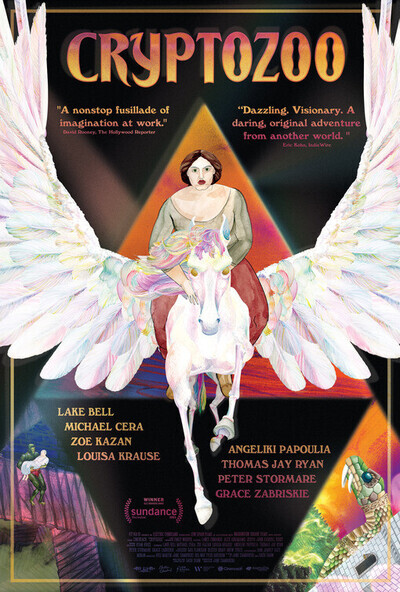