The high school rom-com “Crush” plays like a queer version of a John Hughes movie. The quirky outsider pines secretly for the most popular kid, the students have a zippy way with words that suggests a wisdom beyond their years, and everyone—regardless of their status on the social hierarchy—gets wasted at the kind of mansion rager that probably never occurred in your own youth.

But despite the familiar settings and tropes in director Sammi Cohen’s debut feature film, “Crush” feels refreshingly contemporary. This is a movie about gay characters in which there is no hiding in the closet, no anxiety over coming out, no fear of condemnation from parents or ignorant classmates. These teens are here, they’re queer, get used to it, to borrow a decades-old rallying cry. The matter-of-fact way they discuss romance in the script from Kirsten King and Casey Rackham is reflective of evolving mores and identities. It just isn’t that big of a deal to this generation—or at least, it shouldn’t be, “Crush” is saying.

And that kind of authenticity springs from the fact that so many of the people involved both in front of and behind the camera identify as queer themselves, including the director, writers, and stars Rowan Blanchard and Auli’i Cravalho. The former Disney performers assert themselves confidently with more mature material while still bringing all that well-honed comic timing; Blanchard made her name on the TV series “Girl Meets World,” and Cravalho became a global phenomenon at 16 as the star of “Moana.” The two have an easy, sparky chemistry that’s obvious to everyone but their characters, and watching them steadily acknowledge their feelings for each other is, of course, the film’s joy.

But the road to that realization is paved with snappy dialogue and playful, well-paced situations. At its core, this is a mystery similar to uncovering who’s truly the scandal-sheet scribe Lady Whistledown on “Bridgerton.” At least it is to the student body of Miller High School, who regularly arrive for class and find the lockers, walls and bathroom stalls tagged with the whimsical, colorful work of an artist who favors wordplay and goes by the name King Pun. You’ll be able to figure it out pretty easily. That’s not the point. The point is the finger-pointing and running around that Blanchard’s Paige must do to prove she’s not King Pun—even though she’s the prime suspect as a talented artist herself—and avoid suspension. (Michelle Buteau brings a hilariously deadpan delivery to her handful of scenes as the school principal.)

Paige gets help from her best friends (Tyler Alvarez and Teala Dunn), who happen to be passionately in love AND running against each other for student body president. (It’s a little complicated and not nearly as interesting as the main story.) But she also drags a couple of childhood friends into her quest: queen bee Gabriella (Isabella Ferreira), whom she’s loved from afar since the fifth grade, and Gabriella's tomboy twin sister, AJ (Cravalho). Paige fakes her way onto the track team, although hasn’t the slightest shred of athleticism, to search for clues and spend time with Gabriella. But doing so also allows her to hang out with AJ and ... well, you can imagine where it goes from there, with the requisite twists and misunderstandings to serve as obstacles along the way.

“Crush” is light but always charming, especially in the fine line it walks between snark and sincerity. Megan Mullally finds just the right spot in the middle of those two instincts as Paige’s doting but thoroughly inappropriate single mom. She buys Paige glow-in-the-dark dental dams, for example, but also offers her warm, maternal advice. Mullally is such a pro and a treasure, she’s able to sell the more extreme elements of her character. Really, everyone here is super adorable, so there’s never any doubt that everything will work out just fine. But if this effortlessly multicultural, sex-positive comedy makes someone feel a little more comfortable about their place in the world, then it’s crushing it. 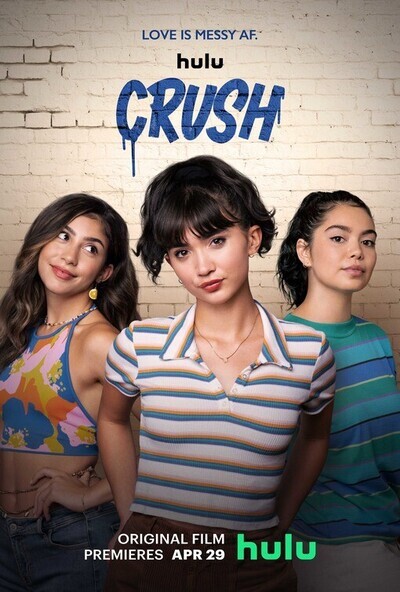