Our interest in serial killers often involves wanting to know the gory details, or the salacious motives behind such heinous acts. But diving deep into why someone like a serial killer chooses to kill is a detail sometimes left in the shadows. Enter Dr. Dorothy Lewis, a psychiatrist who has spent her life examining such people that society would rather forget, get rid of, or simply look at as the monster in a true-crime story. "Crazy, Not Insane" is a half-portrait, half-investigation about her work, addressed with infectious curiosity by director Alex Gibney.

Dr. Lewis has long believed in the diagnosis of multiple personality disorder, or dissociative identity disorder, in the cases of certain famous killers. With such a condition, the subject seemingly changes characters before Dr. Lewis’ eyes, using these personalities created as protections from childhood traumas. Such transformation can include the changing of a voice, posture, and/or gaze. To some it looks simply like theater, like how Arthur Shawcross changes his tone of voice to that of his mother. For Shawcross' case and others, Dr. Lewis had an uphill battle in proving her theories, and faced a great deal of scrutiny from her peers.

Gibney approaches Dr. Lewis' life’s work as a fan himself, revisiting her major cases (including John Frank Garrett, and Ted Bundy) with straightforward hopes of promoting her way of addressing some of the most reprehensible people on the planet. As she speaks from her home, surrounded by natural light, boxes of tapes, and a hairless cat, Lewis details the different cases she’s had in the past, and the way she experienced what felt like DID in different cases, and connected to the damaged brains and psyches of those subjects. Gibney presents a great deal of this interview footage from the '80s and early '90s, which sometimes is fittingly warped by either the passage of time, or perhaps the malcontent of its subject matter. Select stories told by Dr. Lewis are animated as stark, beautiful black and white sketches, with faces changing to emphasize the subject's psyche. As Gibney's predominant interview subject, Dr. Lewis is lively and with a delicious dark sense of humor, a psychiatrist who has seen and heard it all, but hasn't lost her sense of how to approach another human's pain.

In Gibney's own way, "Crazy, Not Insane" is a full immersion into the different psychologies of various murderers and their own graphic childhoods of disturbing abuse and trauma. But the documentary does offer some breathing room, as in between long sequences about serial killers, it shows Dr. Lewis drawing with charcoal, or working alongside her son. The serene voice of Laura Dern sometimes speaks over the sequences, sharing Dr. Lewis' notes from these sessions, depicting a mind that was working through something extraordinary, and persisted beyond her naysayers. (Dern will star in a future dramatic series from Gibney about a psychiatrist working with death row inmates.)

The significance of Dr. Lewis' studies, and of finding immediate value in them, comes into focus with the doc's larger issue of America's death penalty, which gives the documentary a deeper impression than simply sharing Lewis' ideas and past sessions. Some people have done horrific things, but Lewis and Gibney together ask why we consider death to be the best answer, whereas research of criminal psychology can even help understand for future cases. Gibney’s film offers a fleeting look at the history of the death penalty in America since its reimplementation in the 1970s, and also features clips of its earlier proponents, like Hillary Clinton, Joe Biden, or Dianne Feinstein.

America’s tradition of execution has inspired its own type of psychopathy, this documentary reckons, especially with Lewis reflecting on the time she interviewed a traveling executioner, who also works as a licensed electrician. He has the type of deficient empathy that we expect from serial killers, without the psychological trauma and brain damage that often can lead to choosing to kill. It’s an especially creepy scene, for a movie that is comprised of numerous interviews with murderers, and it proves Lewis’ larger thesis that murderers are not born, they are made.

At its most interesting, “Crazy, Not Insane” is accessible and educational about how the brain generally works, especially by using examples of those whose brains have been damaged, whose wiring made them choose in some form or another to kill. Dr. Lewis becomes an eye-opening figure of radical empathy, and she makes an effective argument for her way of thinking. As storyteller, Gibney finds a constructive manner to mindfully engage our admittedly bizarre fixation with murder (which would be worthy of a separate doc) while encouraging a more humane way to approach some of society's most violent figures. 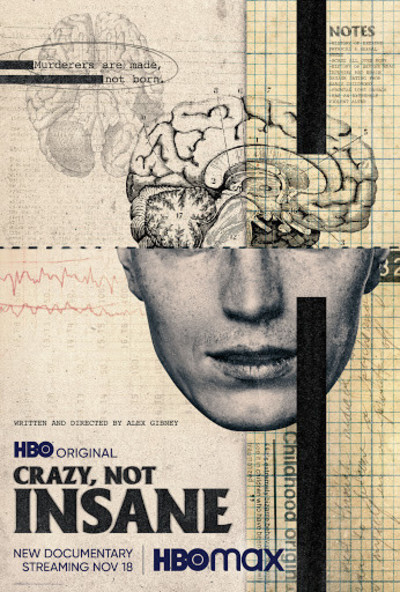 Dorothy Lewis as Self