“The cataclysm has happened, we are among the ruins, we start to build up new little habitats, to have new little hopes.” That is the second sentence of D.H. Lawrence’s last novel, Lady Chatterley’s Lover, which is not nearly so widely quoted as the first one, the one about how we live in tragic times. Lawrence wrote these words in the late 1920s, and they continue to ring true. And truer.

Written and directed by Mounia Akl, "Costa Brava, Lebanon" is the story of a Lebanese family of, according to an onscreen title, the not-too-distant future (despite the story having roots in a real-life cataclysm of 2015). This clan has fled the now (apparently) uninhabitable Beirut and constructed a new little habitat in the mountains. Presided over by Walid (Saleh Bakri), a stern but not malevolent patriarch, it’s in many respects a lo-fi home, without TV displays or computers, although mobile phones are used by the other members of the household on the sly. These residents are all female: Walid’s blunt mother Zeina (Lilian Chakar Khoury), his two daughters, pre-teen Rim (played by twins Ceana and Geana Restom) and teen Tala (Nadia Charbel), and Soraya, Walid’s wife. Played by Nadine Labaki, herself an unusually notable figure in Lebanese cinema (she is the first female Arab director to be nominated for a Best Foreign Language Film Oscar, for her highly acclaimed 2018 “Capernaum”), Soraya is a one-time musical star whose work was attuned to social protest; she met the activist Walid at a rally.

The amenity that makes the family’s aerie most attractive is its good-size swimming pool. While working the small strip of land is hard, the water looks pretty good. Whatever sense of idyll exists is broken up when a faux-primitive statue of the country’s president (the crude artwork strapped to a flatbed and headed out of the city is the first image of the movie) is planted a few yards away from their land. Some workmen inform the family that this ridge of the mountainside is going to be a landfill. The trash that compelled the clan to leave Beirut is essentially following them.

"Costa Brava, Lebanon" treats the effect of this upheaval in ways both unconventional and occasionally pat. The flirtation between Tala and one of the younger managers of the project, Tarek (François Nour), is wholly predictable, as is a health crisis experienced by a senior member of the household. The most compelling depiction of a personal dynamic is in the increasing tension between Walid and Soraya. Both share the same values but have increasingly distinct views on how to realize them. When the workmen recognize Soraya and tell her they liked her music, she’s flattered, and she allows herself to believe that she made a difference before she checked out of society.

Akl, making her directorial debut, takes resourceful advantage of her freedom as a filmmaker, creating some startling effects. After Soraya gets out a guitar and sings to her kids, the view outside the window starts a lateral move, to the right, as if Soraya is now on a train pulling from a station—a perfect metaphor for the character’s urge for going, as Joni Mitchell would put it. A vision of fire also startles. The film’s images entangle us with the characters, which makes its indeterminate ending a little more disappointing than it might have been. But this post-cataclysm habitat is worth paying a visit anyway. 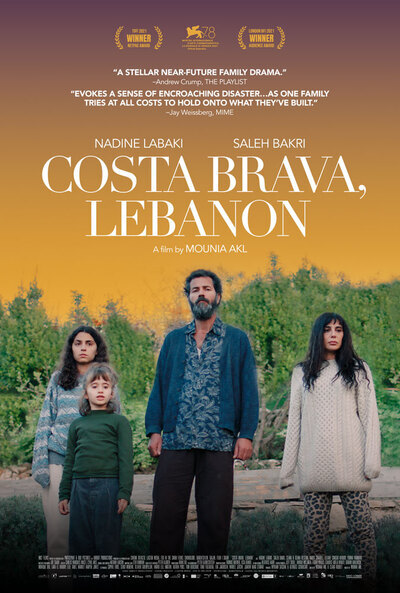