Time will tell if Andrzej Żuławski has pulled off the same benevolent magic trick as Raúl Ruiz and left his fans one more movie after his passing. Stranger things have happened, and no one welcomed the strange like Żuławski. For now we have only "Cosmos," based loosely on a novel by Witold Gombrowicz, a culmination of the rabble rouser's nearly 50-year career. As usual, it's almost too much cinema for its 103 minutes. Confined to a few locations and shaking with ecstasy, possibility and the torment of being alive, "Cosmos" is like absinthe distilled secretly in a prison cell. The world may be angry, confusing, loud and lopsided when drinking it, but when the bottle is empty all you'll want is more. Reality has never been this fun, even if it's frequently this random and hopeless. Better to take the oblong fantasy.

Jonathan Genet, who has the haunting, gaunt electricity of Pierre Clementi, plays Witold, a student trying to fervently type his masterpiece in every spare second he finds. He and his friend Fuchs (Johan Libéreau) have retreated to a bizarre country inn for a little peace and quiet only to find neither. The owner is Madame Woytis (Sabine Azéma, whose font of shocking red hair is always a relief to see), who is prone to fits of absolute stillness whenever excitement gets the better of her, usually after a screaming fit or a bout of somnambulant wood chopping. The other occupants of the inn are Woytis' lover Léon (Jean­ François Balmer), who salts his worts and jumbles his words, Catherette the maid (Clémentine Pons), whose cleft lip entrances all who gaze upon it, Woytis' gorgeous daughter Lena (Victória Guerra) and her equally gorgeous paramour (Andy Gillet).

At once everything is wrong. A bird hangs from a small noose in the garden outside the inn. Bugs crawl over every morsel of food. Every time Witold catches sight of Lena he looses his composure in the most percussive fashion possible. Fuchs disappears for short stretches of time and comes back with increasingly flamboyant signs of injury. No one gets along, but they can't get quit of each other. There seems to be something keeping them in each other's orbit. The confluence of symbols ­(an axe, lips, hanged animals, a ladder)­ seem to hint that these disparate figures must destroy some part of their connection to one another in order to escape the prison of their imperfections. Witold's existence becomes a merry-­go-­round and he can't decide if he wants off.

A merry­-go-­round might be the best way to describe the experience of watching the whole of Żuławski's cinema. His camera certainly does plenty of spinning and twirling. A merry-­go-­round operated by a cackling, drunken carny who thinks kids could stand the scare. So you go round and round and so much cinema gets into your eyes and open mouth you think you might throw up. Do you want to get off? This kind of exhilaration could never be recreated by a responsible entertainer. You're implicated in the madness as surely as he is.

He was born in Ukraine and spent his early life in Poland, barely escaping death at the hands of Nazis. Knowing firsthand what depths we can sink to, he dedicated himself to mixing high and low with ululating abandon. If his politics and blocking seem to evoke a railroad being constructed in front of an already moving train, it was ultimately an honest concentration of fears and exuberances born of the realization that his life was not a guarantee. And so Żuławski shouted everything on his mind, threw sex and violence at the screen with equal parts glee and revulsion, and rarely hid behind an edit. He wanted the camera to run every step and keep pace with his characters. When he does edit to move significantly through time or space, it's to shock you, as in his favourite rug­-pulling technique, dropping the score out of a scene without warning. Ugliness must be paid attention to, even celebrated, as it gallops into and trots upon our lives. Sometimes it's all we have, and we must have something. As one of the fatuous aristocrats in his 1991 film "The Blue Note" says: "What is beautiful does not last." Trauma lasts forever.

"Cosmos" is both typical and atypical Żuławski. It's laugh-out-loud funny right up to its final seconds, new territory for the haunted auteur. The cast has delicious comedic chemistry and the movie ends with the funniest closing text I've ever read followed by a gag reel. In Azéma's Madame Woytis we have the ever­present overbearing mother figure (familiar from his films "L'Amour Braque," "The Blue Note," "La Femme Publique" and "Szamanka") who seems to enjoy tormenting her offspring, though this time with more demented personality thanks to the mop­topped queen of French cinema's fervor. It's sex-obsessed but it's romantic in its perverted longing, instead of just desperate. Witold has a poetic conception of the woman for whom he pines, and one gets the sense that he fears an Icarus­type immolation should he ever get too close. When he first shakes Lena's hand, it looks like he's suddenly begun masturbating in front of her thanks to camera placement and his cowed, fidgeting body language. He can't ever act as though he's meant to have a place among his fellow homo­sapiens, but that doesn't keep him from throwing himself into crowds of them. That's the paradox at the heart of Żuławski's cinema. Those who do understand the bottomless grotesquery of humanity are addicted to the good parts that lay beyond.

Witold is plainly driven mad every second he remains in the company of Lena and her familiars, but he can't break away. He wants her, or the idea of her, badly enough to let himself be mentally hobbled by the impossibility of their union. His paranoia at the events transpiring all around the house grows and grows and soon comes to hallucinatory life. A look at a Tintin comic in the inn manifests into a man dressed as the famous boy detective during the final act. Long conversations about fixing Catherette's lip precede the introduction of a woman played by the same actress whose perfect mouth conceals deep emotional scars. A final destructive act may be something Witold dreams, compells or performs. Lena herself, who seems so detached and vibrant when Witold first encounters her, sinks into his quivering uncertainty the more time she spends at the receiving end of his affections. She undergoes transformation while Witold lusts after her essence and writes soul describing passages about her in his book. The women in earlier work by the Polish conjurer tended to blend together, thanks in part to his continuous casting of lover/muse Sophie Marceau and because he relied so heavily on doppelgängers as narrative devices. But here the women are much more clearly delineated. Guerra (last seen in "Lines of Wellington," Raúl Ruiz's first film after his death) is the most memorable because she slowly becomes Witold and, by extension, Żuławski himself, prone to unexpected mood swings and bouts of open mouthed quaking at the unruly design of fate. What does Lena see when she stands shivering, cigarette stuck aloft, staring into the sky? Us, sitting there, watching her. The same mad bunch of contradictory insects that Żuławski saw whenever he pointed his camera at anyone: the boundless, endless possibility of it all, the horror and the wonder. The joy of wordplay, the ache of love, the terror of fascism, the pangs of envy. He saw all of us, everything we wanted to hide, and his cinema is an explosion of all those dirty, secret things. "Cosmos" is everything at once too fast, like the broken merry-go-round, sudden inebriation, or a magic trick. Real life is only steps away, but you'll never find anything as brutally fantastic out there. 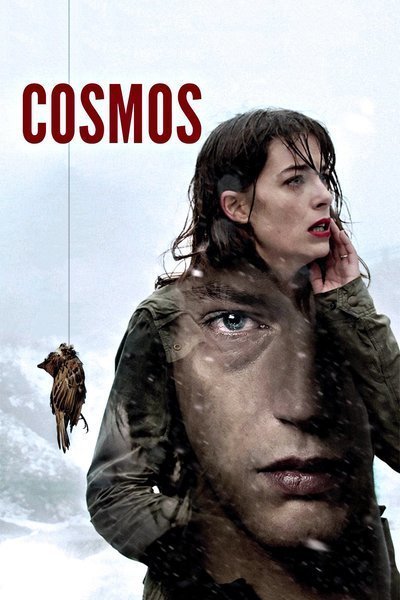