To suggest that Bruce Willis is phoning in his performance in “Cosmic Sin” would be an insult to telephone communication, which can be an effective means of conveying important information and genuine emotion.

Willis’ work—and this movie as a whole—accomplish neither of these things. As directed by Edward Drake, who co-wrote the abysmal script with supporting actor Corey Large, “Cosmic Sin” is at once baffling and boring. It lays the groundwork for its futuristic, sci-fi setting with lengthy and convoluted title cards, suggesting a transporting adventure awaits. But then the Earth of 2524 doesn’t look or feel terribly different from the one we occupy today, except for robot bartenders and the obligatory flying cars. And apparently there are no acting lessons in the future, as the performances here are uniformly stiff and unconvincing.

Worst of all, “Cosmic Sin” isn’t even a bad B-movie in an interesting way. The pacing is sluggish, the script is crammed with both incomprehensible technical gobbledygook and lazy, sexist jokes, and the visual effects are laughably cheesy. My kid could make a more dazzling space movie on his iPad.

At the center of this bland mess is Willis—once again collecting a paycheck—as James Ford, a disgraced but once-revered military leader. He’s called back into duty for the tried-and-true “one last job” with the discovery of a new alien civilization on another planet. (According to the movie’s mythology, humans begin colonizing other planets in the 2100s. Something to look forward to during these long days when we’re cooped up at home.) But they may not be friendly aliens. They may also be … zombies? And yet, the depiction of zombie aliens isn’t as gloriously deranged as one would hope.

Among Willis’ co-stars are Frank Grillo as a bad-ass general, naturally; Brandon Thomas Lee, son of Pamela Anderson and Tommy Lee, as his trigger-happy son; a wisecracking Costas Mandylor; Adelaide Kane as the mousy mechanic who’s saddled with the most wordy, explanatory jargon; and Perrey Reeves as an even-tempered scientist who has some vague romantic history with Ford. They have so little chemistry and their flirty banter is so tepid, though, that this subplot goes nowhere. "Cosmic Sin" co-writer Large also gives himself some of the worst dialogue of all between his hokey one-liners and leering come-ons.

After a brief ethical debate, they determine that they must obliterate the zombie aliens with a generic-sounding device called a Q-bomb (which, for some reason, features an old-fashioned, red digital countdown display). Ford and his team quantum leap to the woodsy planet of Ellora (which looks a lot like the forest moon of Endor from the “Star Wars” universe) to take out these creatures before they can come to Earth and kill all of humanity. So “Cosmic Sin” may also be a parable about … genocide? It’s all so half-baked, it’s hard to know. Interminable gunfire and a droning score take the place of actual suspense. Also lacking in substance are the helmets and body armor the space travelers wear to hop from one planet to another. They look more like spray-painted slabs of Styrofoam, strapped together with Velcro, with a few lights and reflective pads stuck onto them.

But a bit more thought seems to have gone into the costuming than Willis put into his performance. After starring in a recent string of such cheap action flicks, including “Hard Kill,” “Survive the Night” and “10 Minutes Gone,” it appears Willis would rather be anywhere else but here. He offers nary a trace of the trademark swagger that made him a superstar in the ‘80s. Regardless of the situation, he delivers his lines in a sleepy monotone. Doing shots alone at a roadside dive bar at the film’s start, he’s theoretically trying to convey a sense of isolation and regret, but all we get is boredom. It’s the most honest and relatable moment in the whole movie. 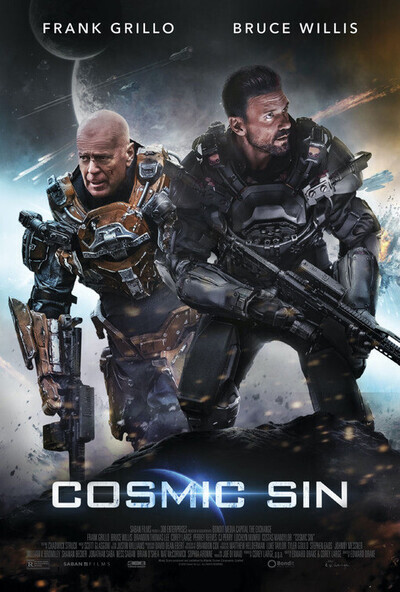 Rated R for language including some sexual references, and violence.