Probably it’s the Conditions Of The Pandemic, but director Joe Carnahan and actor-producer Frank Grillo seem to be on a roll—this is the second film the two have unveiled since March. That prior movie was "Boss Level," an enjoyable riff in “Edge of Tomorrow”/”Ready Player One”/”Groundhog Day” mode, which provided Carnahan a superb pretext for blowing things up real good over and over and over again.

“Copshop,” from a script by Carnahan and Kurt McLeod (the latter concocted the story with Mark Williams), is ostensibly more realistic than “Boss Level,” but its setup is equally not entirely unfamiliar. Grillo plays Teddy Muretto, a seeming criminal who a lot of people want dead. Immediately. He determines, therefore, that the safest place for him is jail.

Tying up his man bun tight, he strides into a drunk-and-disorderly dustup at a casino wedding, and assaults police officer Valerie Young (Alexis Louder). This does the trick. Valerie, the recent purchaser of a near-antique revolver, wants her job to be a little more Wild West than it is. As it happens, her particular corner of Nevada is so sleepy that she and her sergeant had ample time to relax by a remote burger truck before the D&D was called in. By the end of the movie she won’t be feeling like she should have been careful for what she wished for. Rather ... well, let’s say A NEW ACTION HERO IS BORN.

After Teddy is incarcerated (and is able to eye the precinct’s military-grade armory), some State Troopers saddled Valerie’s station house with a smelly sot. As it happens, this party, one Bob Viddick, has contrived his stinky state in order to get next to Teddy. Viddick is in fact sober as a judge and ready to pass a sentence on Grillo’s character.

Viddick is played by Gerard Butler, and if the idea of a cage match between Grillo and Butler that’s set in mostly separate cages, until it isn’t, sounds like Guy Movie Heaven to you, well, ascend at will. The fellas trash talk each other while other menacing plot elements percolate, including a corrupt cop who’s trying to smuggle some drugs out of the precinct house.

The suspense is intriguing and played low-key. Indeed, for the first 50 minutes this may strike you as pretty restrained for a Joe Carnahan movie. But fear not, pilgrims. When a gregarious psycho killer played by Toby Huss enters the precinct house with party balloons and a machine gun, several varieties of “all hell” break loose.

The shoot-'em-ups are consistently “whoa!”-eliciting, and while you couldn’t call any of the plot twists genuinely unpredictable, they do not lack for intrigue. Having an African-American female character go toe-to-toe with two white male action movie sort-of icons is a commendable idea but also one which Carnahan could have whiffed, and badly. As it happens he does not. Bring on the sequel. 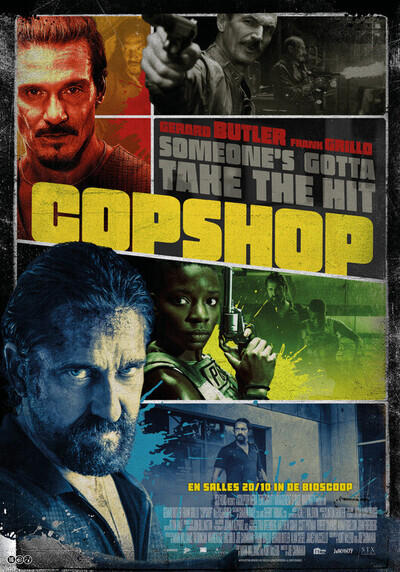