“Boss Level” begins with a very snazzy shot, that of a fancy watch face surrounded by a glittery gold … something or other. As the camera slowly dollies back, we can see that the sight is a mirror image; soon we process that the watch is hung on a Maneki-Neko cat jewelry holder. The once-strange becomes familiar, but in that space of time the familiar will be shattered by violence. Because this is a Joe Carnahan movie.

A machete slices into the headboard of Roy Pulver’s bed, and the very ripped Roy is out of bed and kicking back at his assailant as the cutie who was in bed next to him flees. Soon enough a helicopter is sidling up the windows of his loft, and a guy with a Gatling gun therein is firing through the panes and Roy has to jump out of his building and into a street level dumpster, which he hops out to carjack a very souped-up vehicle.

As all this mayhem unfolds, Roy explains to us, in voiceover, that this happens to him every time he wakes up, and it continues until one of the army of baddies that’s trying, for reasons he can’t understand, to kill him actually does kill him. And then it starts all over again.

“It’s like being stuck in a video game at a level you can’t beat,” he comments helpfully.

So there you have it. Hence the title, “Boss Level.” Roy is played by Frank Grillo, and he’s very companionable here as a put-upon action hero who came to kick ass until he can’t anymore. After one-hundred plus tries, he determines that not only does he have to kick ass, he also has to take names—in order to figure out why this is all happening. The answers lie with his estranged wife (Naomi Watts), a scientist working for a shady mega-corporation overseen by a vainglorious would-be world-saving despot (Mel Gibson). And they also, oh yes, lie with a machine (kind of a particle-collider lookin’ thang) that can bend time and space itself and possibly bring about Ye Olde Apocalypse.

Whew. That’s a lot of stuff for a movie that’s barely 100 minutes, but “Boss Level” compensates for its overstuffed scenario and relentless derivativeness—actually, it makes you stop caring about its relentless derivativeness—with concentrated fast pacing and breakneck action. It also manages to work in a storyline about Pulver’s young son, who he’s never gotten to know and who compels him to become a better man as he repeats his always grisly death, while solving mysteries and adding to his necessary feats of heroics.

One suspects this thread and its attendant paean to the ostensible joys of fatherhood is a bit of a sop from a filmmaker who feels he’s expected to “mature” (good thing Tarantino hasn’t had any kids yet, says me). But it plays relatively credibly. And anyway there’s plenty of immaturity to go around, from bad (the line “screams at date rape volume” should have gone to rewrite for sure), to the not-quite-indifferent (the ever-shit-stirring presence of Gibson, who nevertheless gives good villain) to the pretty good (Pulver’s eventually incendiary way of disposing of his tormentors).

The movie, scripted by Chris Borey and Eddie Borey (who have some other tricksy thrillers on their filmo) and given a polish by Caranahan, really does play like “Groundhog Day” meets “Edge of Tomorrow” meets “Smokin’ Aces” and “Smokin’ Aces 2” meets “Ready Player One” meets “Mortal Kombat” (the game), although maybe not quite in that order. If that sounds like a good time to you, I think it will be. 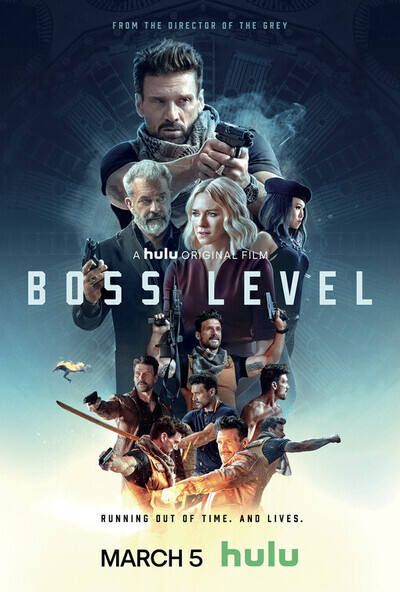 Will Sasso as Brett