According to local weather experts, the day that this review runs will be the hottest in Chicago in seven years. Every single time the mercury crests 100, I think of the summer of 1995, when a heat wave killed over 700 people in the city of Chicago, a vast majority of them on the South Side. In a timely coincidence, a film about that heat wave and the underlying social issues that impacted the death toll is starting its second week at the Siskel Film Center. Judith Helfand’s “Cooked: Survival by Zip Code” shines a light on the issues of poverty, race, class, and education that underly how natural disasters take lives. It’s a well-meaning but scattershot piece of work that loses focus as often as it drives a point home. Still, there’s value in Helfand’s main thesis, which is that we should reconsider how we define the word “disaster” to encompass the issues that face a community before a heat wave or hurricane hits it.

Twenty-four years ago, the actual temperature in Chicago stayed above 100, topping out at 106, for five consecutive days. Hospitals and emergency responders were startled as the body count continued to rise, eventually rising as high as 739 deaths attributed to the heat. Of course, the dirty secret that went largely unreported was that the casualties didn’t happen on the Gold Coast or even the North Side – they happened on the South Side of Chicago, a part of the city in which fewer people had air conditioning and crime levels are high enough that people were too scared to open their windows. Looking at how the death toll changed in Chicago as you traveled through the zip codes is not just a morbid practice – as writer Eric Klinenberg, one of the most interesting interviews subjects in “Cooked,” says, we study death in order to better protect life. Asking why so many people on the South Side died can lead to changes that saves lives in the future.

Helfand is an active participant in “Cooked,” narrating the film and presenting many of its issues via her voice. While her intentions are undeniably honorable, she makes for a distracting, unfocused presence in “Cooked.” She’s either driving points home with the bluntness of a tweet – the statement that poor people finally got to feel A/C when they were awaiting autopsy is an example of how she underlines her ideas with marker – or asking the wrong questions of the wrong people. At one point, Helfand questions federal responders who are preparing for natural disasters about why they’re not doing more about poverty in the communities often impacted by them? She eventually admits that we need both – preparation for the immediacy of responders and city planning and poverty easement – but “Cooked” loses its way several times before she gets there. It feels confrontational in a way that really doesn’t get anyone anywhere. And then in the final part of the film, she goes off on a tangent about food deserts and buses that provide vegetables to the needy. It feels like an issue for another movie.

The truth is that it’s hard to wrap your brain around the idea of a slow-motion disaster. The 1995 heat wave in Chicago led to changes in terms of preparation like cooling centers and getting into communities to make sure elderly people are getting some relief. But Helfand and Klinenberg, whose book was the basis for part of the film, reveal how superficial a lot of the responses to 1995 were in the long run. Asking how we can stop people from dying this weekend when the temperature crests into dangerous levels is important but asking why people die when it gets this hot is far more complex. That Helfand’s film loses its way a little bit as it digs into the why of natural disaster death is understandable, given how many different elements play a role. It’s important that someone is starting to dig. 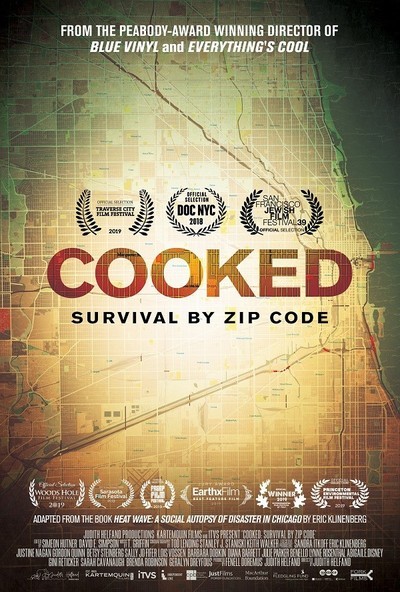