It takes a certain degree of cinematic courage (or madness) to tell a story that really only has two characters. If your leads don’t have chemistry; if we don’t believe their relationship; if we just find ONE of them unlikable—you’re in serious trouble. One could program an entire alterna-Sundance of independent films that failed one of these “ifs.” And so I’ll admit that my anticipation level for “Comet,” Sam Esmail’s debut starring wife Emmy Rossum and Justin Long, was relatively low. The movie is barely being released, Long has made his fair share of bad rom-dramedies and two-character pieces with near-mystical commentary on the state of love and loss are almost always disastrous. So no one is more surprised than me by “Comet”. It features career-best work by Long and Rossum, both eagerly devouring Esmail’s witty script. Yes, some of it is overwritten and a bit too clever for its own good, but more often it’s an engaging character piece

“Comet” tells the story of six years of a relationship between Dell (Long) and Kimberly (Rossum) in intercut scenes of its biggest moments—meet-cute, break-up, get-back-together, break-up, etc. The narrative jumps from scene to scene out of chronological order, and yet Esmail’s script still builds effectively, which is a more notable accomplishment than you may realize. We have seen plenty of Scenes of a Relationship films but the construction is unique in that Esmail reveals just enough about his characters at each point in their trajectory to really fill in the gaps between them. It feels like Esmail, Long and Rossum really know and love these characters. So while it may be overwritten, it is soulful and truthful. That matters.

Dell is pessimistic to a fault (“I hate people who think I’m too negative”), the kind of relative misanthrope who lives in the “five-minutes-from-now” due to constant worry. Kimberly lives in the now. Dell falls for her the minute he sees her, in one of those Comet Streaks Across the Sky moments that most of us believe only happens in movies and the cynical can’t forgive when it does. He falls so hard, that he asks for her number in front of her truly annoying boyfriend, a gent who talks about how The Beatles were better when Pete Best grounded them and the beauty of soccer. Dell doesn’t want to miss the “now,” as he has so often in his life.

From here, “Comet” starts to jump—break-up, reunion, etc. Each of these scenes is fully constructed and fascinating in its own right, and credit should go to the technical team, particularly editor Franklin Peterson, for keeping these transitions from feeling jarring. A couple years after their “Meet-Fate,” Kim and Dell are getting ready for a Louis L’Amour-themed wedding (of all things) in Paris. Their relationship is at a crucial turning point, but it feels like at least one of them is about to make the wrong decision. These are two characters who can’t quite get on the same page, as is so common in relationships—one is in the now and one is in the five-minutes-from-now.

Esmail's debut script is reminiscent of Aaron Sorkin in its dense, rapid-fire dialogue. It has that zip that makes you think simultaneously, “No one talks like that…BUT that’s a damn good line.” And Long and Rossum eat it up, both serving as executive producers as well. They have just the right chemistry to make both their falling-in-love and pulling-apart scenes work. Long, in particular, displays a degree of believable vulnerability that we haven’t really seen from him before, while Rossum is incredibly charming and grounded. We see why Dell would fall for her, and why she would eventually pull away from him. The performances are notably balanced. Both could have been caricatures—the cynic and the pixie girl—but neither remotely are.

As “Comet” starts to drift into the mystical, even forcing us to wonder if these images are visions of the future, the past, or some dream state, Esmail loses his hold on the material ever so slightly. And one wishes he had opened up the film a bit more in terms of film structure, as it often feels like it might work better as a two-actor piece on a stage the way it exists now. He also over-uses his score a bit too much, using it often to link the different scenes in a way to keep a cinematic throughline, but it gets a little forceful.

In the end, “Comet” is a showcase for Long and Rossum, and they shine in that spotlight in unexpected ways. Perhaps I’ve just been burned too many times by bad movies about the intertwining of fate and love to remember that sometimes they work. “Comet” works. 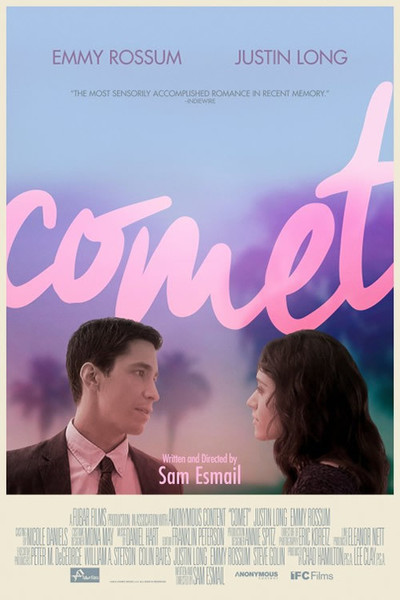