Another week brings yet another origin story. After dealing with the possible rebirth of Thor in “Mortal,” I am now presented with “Come Away,” the “family-friendly” story of how Peter Pan and Alice (of Alice in Wonderland fame) came to be. In the biggest nonsensical surprise sibling pairing since 1981’s “Halloween II,” screenwriter Marissa Kate Goodhill makes Peter and Alice brother and sister. Then she drops them into a biracial family filled with all manner of horrific adult problems. While their parents, Jack (David Oyelowo) and Rose (Angelina Jolie) deal with addiction, money problems, and the death of a child, Peter and Alice escape into an underwritten, hideously whimsical fantasy world full of familiar elements from their respective tales. Reality and fantasy cross-pollinate in jarring ways: By the time Alice swigs like Richard Burton from Mom’s hidden, conveniently labeled “Drink Me” bottle of brown booze, I was beyond appalled and confused.

“Come Away” evokes memories of “Radio Flyer,” the equally appalling 1992 child abuse drama where fantasy and cruel reality merged in ways that were shockingly offensive. As in that film, this one is narrated by the adult version of one of the children. The adult Alice (Gugu Mbatha-Raw) tells her own children the story of her upbringing, and how her brother decided one day to abandon the real world for eternal youth in Neverland. We meet young Alice (Keira Chansa), Peter (Jordan A. Nash) and their doomed older brother, David (Reece Yates). The trio run through some gorgeous landscapes playing pirate games while John Debney’s sweet score accompanies them. Special effects suddenly appear, visualizing the children’s imaginations. Reality breaks in when, after defeating some “pirates” around a real boat he has been forbidden to go near, David slips into the lake and drowns. Or perhaps he’s struck by lightning first, then drowns. I wasn’t completely sure. Since David was showboating for him when tragedy struck, Peter blames himself for his brother’s death.

Peter will eventually also blame himself for the terrifying mutilation of another family member, an act of violence he and Alice unintentionally set in motion when they visit a pawn shop run by the Mad Hatter (Clarke Peters). They go there because, after sinking into grief over losing a child, their father falls off the gambling addiction wagon and goes into even more debt. While this is happening, their mother finds solace in the bottle and their ominous, rich aunt Eleanor (Anna Chancellor) threatens to provide the necessary funds in exchange for taking Alice away from her mother. Eleanor is just one of the villains of the piece; since she can no longer take David away to boarding school as originally agreed upon by Rose, she’s determined to turn Alice into “a lady.” Any attempt to take the colorblind casting of this film at face value immediately disintegrates when Eleanor refers to her Black brother-in-law as “a member of the lower class” that Rose should not emulate. Good luck disguising your niece, lady.

When does this movie take place? I’m assuming the 19th century based on the clothing and scenery in its real world. The ideas of boarding schools and “becoming a lady” also validate my assumption. The timeframe doesn’t exist for any other reason than to cater to its unwise origin story intentions. Very little is done with the legends; they’re just used as placeholders for visuals, or appearances by thinly-veiled characters from the stories. None of this make one lick of sense, not even from a fairy tale perspective, and the movie can’t even seem to get its details correct. When Alice, responding to a real-life moment of trauma, begs Tinker Bell to whisk her to Neverland, I thought “girl, you’re praying to the wrong author.”

Please note that I’m not saying a film cannot have a successful merging of real-world terrors and an imaginative jaunt into the fantastical. One need look no further than Guillermo del Toro's “Pan’s Labyrinth” for a brilliant example. And Uncle Walt and the Brothers Grimm have made cottage industries out of scaring young kids with death and danger in an attempt to get them to behave. But the former example is all metaphor and the latter is all cautionary tales. I don’t know what “Come Away” is supposed to be, what lessons it’s imparting, or for whom it was even made. Kids won’t be interested in the throwback imagery and adults will find its depictions of addiction, grief and violence shallow and protracted. In her live-action debut, director Brenda Chapman fails miserably at integrating the horror and the fantasy. Del Toro’s film worked because its fantasy world never becomes untethered from the terrors of its reality. Here, the whimsical elements feel like jokey, insulting intrusions rather than escapes or symbolism.

At least everything looks nice. Also, Michael Caine shows up sporting perhaps the greatest mustache ever seen on film. Other than that, this movie is a rabbit hole you don’t want to follow Alice down. Perhaps there was a great original story here, one that came from whole cloth and didn’t need to depend on the familiar elements of Carroll or Barrie. One that could speak about surviving trauma to kids and their parents alike, perhaps even whimsically. This movie isn’t it, however, and I can’t stress enough how dreadful its attempts at tone balancing are. The primary theory of “Come Away” is that humans lose their imaginations when they grow up. This movie is proof of that. 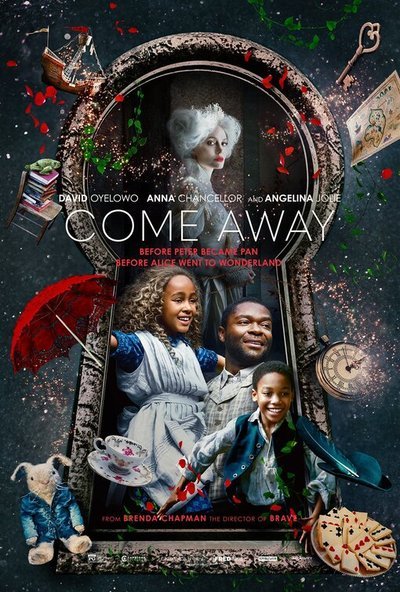 Jordan A. Nash as Peter

Writer (Alice in Wonderland created by)