“Mortal” begins with the definition of its title. “A human being,” appears on the screen, which corresponds to the noun entry in Merriam-Webster’s Dictionary. Since we’re perusing my favorite book, I should mention a few other adjective definitions of the word: “fatal,” “deadly” and  “marked by unrelenting hostility.” All but one of these apply to the protagonist, Eric (Nat Wolff). Oddly enough, it’s the one on the screen describing him as a human being. What Eric is, or rather, who he is, requires a spoiler alert because even the simplest, most shielded description will prove revelatory. Come back after you’ve seen the film if you want to go in cold. All you need to know is that this slow-moving, sci-fi origin story was made by Norwegian co-writer/director André Øvredal, the man who previously gave us the far more entertaining “Scary Stories to Tell in the Dark.”

Now that the spoiler-averse have gone, let me tell you about Eric, the Norwegian-American protagonist of this movie. He is first seen tending to a gruesome burn on his leg. Mysterious fires start around him, so he’s roughing it outdoors by himself. We’re told that the farm he was staying at suspiciously burned down, killing everyone except him. And when he’s harassed by a bunch of adolescent troublemakers on the side of the road, he warns their leader “if you touch me again, you’ll burn.” The bully learns quickly that this is not a figurative statement.

The press materials describe the ensuing death as “accidental,” but it looked pretty damn intentional to me: Kid grabs Eric, Eric glowers, kid buys the farm. Rather than fry the witnesses, Eric runs off and is subsequently arrested for murder. While he awaits extradition back to the United States, the police bring in a psychologist named Christine (Iben Akerlie) to entice Eric into explaining why everybody around him suddenly winds up extra crispy. It’s no spoiler that Christine is introduced solely to become the clichéd love interest of the male hero in this type of film—nobody called a shrink for Drew Barrymore in “Firestarter”—and Eric initially woos her by with a terrifying display of his fire power. Sparks, electricity and big, roaring flames emanate from Eric throughout “Mortal.” The only place he can’t generate any sparks is between these two characters. The lack of even a platonic chemistry makes Christine’s life-threatening choices to save Eric not only nonsensical but infuriating.

Meanwhile, a villainous U.S. government agent named Hathaway (Priyanka Bose) issues ominous warnings about Eric to the police. We discover that the victims of the fatal farmhouse fire were the relatives Eric was seeking when he started tracing his ancestral roots. Those roots have something to do with Eric’s powers; it’s possible that his lineage traces all the way back to mythology. This tracks when Eric tells Christine that, when his powers are activated, he sees a tree. And not a happy little tree, as Bob Ross once painted. A giant tree that sounds like Yggdrasil. Eric also has the ability to control the weather, generating violent thunderstorms at will. “Mortal” tips its hand early when, after the second extreme display of meteorological mayhem by Eric to evade capture, a little kid squeals on the radio that a certain Norse god has returned.

“Did that kid just call me Thor?” asks Eric. Christine turns off the radio. That wouldn’t make any sense, because everyone knows Thor is Chris Hemsworth and is owned by Mickey Mouse. Yet, the possibility that Eric is the rebirth of Norse mythology’s original superstar is far more intriguing in a behind-the-scenes theory than in cinematic execution. I read “Mortal” as Øvredal’s attempt to wrest a bit of control of his homeland’s mythic heroes from the often crass American comic book depictions of them, to bring them closer to their true origins. I can’t even fault him for trying to make a franchise-based buck: This film sets itself up for sequels by ending right in the middle of its story.

However, I can blame Øvredal for the poor pacing and screenplay, not to mention the listless, uninteresting performances by the two leads. Both Wolff and Akerlie read their lines with such disinterest that the movie’s attempts at character development falls painfully flat. Even worse, “Mortal” is yet another dreary entry in the overly serious superhero genre, where brooding and brown cinematography add a false veneer of importance to the proceedings. At least this one has some gorgeous views of Norway, because when the admittedly entertaining and cheesy CGI isn’t on, Wolff’s performance is dull and lifeless.

Akerlie fares even worse; she can do nothing with a character who is a throwback to the days when women were used as motivators for vengeance and little else. Christine, like Agent Hathaway, comes off as a woman making impulsive, unwise choices that serve no purpose other than to make the tortured man in their presence look good. Akerlie even earns this film its R rating by doing that one thing you’d think filmmakers would know by now that's not only dated, but egregious. Maybe she’ll fare better in “Mortal 2.” 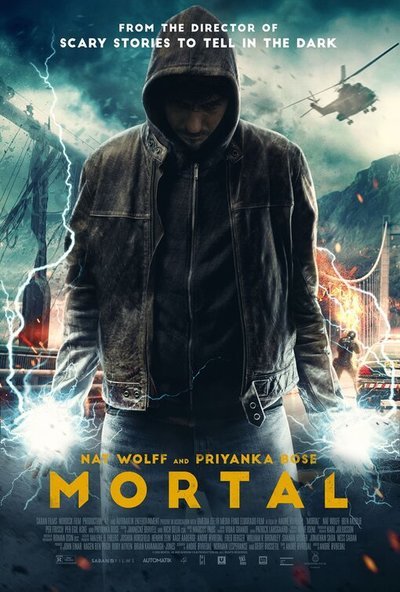