Starting out as an investigation into whether United Nations Secretary General Dag Hammarskjöld was murdered rather than dying accidentally in a plane crash in 1961, then spiraling outward into a probe of various strange individuals and organizations, “Cold Case Hammarskjöld” is a tremendously absorbing film, a documentary that plays like a first-rate thriller hinging on key issues of the Cold War and African decolonization.

I almost wrote “purported documentary” because when I came out of my first viewing of the film, I was unsure of whether parts of it may have been invented or embellished for dramatic (or sensationalistic) purposes. Partly, that’s due not just to the fact that some of this tale does seem fantastical, but also because filmmaker Mads Brügger, a Danish journalist, keeps the viewer off balance by playing with, even joking about that quality. Early on, he allows, “This could either be the world’s biggest murder mystery or the world’s most idiotic conspiracy theory.”

Having seen the film again and read up on it and the issues it evokes, I’m now convinced that it’s a real documentary, not a fake one. One aspect of the film, though, is constructed or staged for dramatic effect. Repeatedly through the film we see Brügger in an African hotel room dictating his evolving narrative to two female African secretaries, who alternate with each other and frequently ask him questions. Not only a way of helping clarify a very complicated story, this device, according to the filmmaker, came about because it “dawned on me that I was potentially working on a film without any women or black Africans.”

Fair enough. And whether or not the two women are actresses or actual secretaries, they fulfill their roles admirably. But it says something that in this tale of intrigue in modern Africa the only Africans who play prominent roles—villainous ones, in some cases—are white South Africans; otherwise the director and his accomplice, white-haired Swedish private investigator Göran Björkdahl, spend years in Europe and Africa conducting interviews with, as Brügger puts it, “elderly, white, liver-spotted men.”

Most of these dappled gents have some connection to the mystery that Brügger starts with. Hammarskjöld, a Swedish aristocrat, was a towering figure in mid-20th century world affairs. Heading up the U.N. beginning in 1953, he took a special interest in helping newly independent African countries wrest free from their former colonial masters. Naturally, this stance earned him many enemies. When the plane he was in went down in central Africa on September 18, 1961, he was trying to negotiate a peace agreement in the Congo region, which had been ruthlessly exploited by Belgium for centuries (for details on this horror, see Adam Hochschild’s superb book King Leopold’s Ghost and the documentary of the same title).

Although the crash was officially blamed on pilot error, foul play was suspected from the first, and Brügger and Björkdahl uncover evidence—including interviews with Africans who witnessed the crash— suggesting the diplomat’s plane was shot down by another. They even identity a British-Belgian fighter pilot they think carried out the assassination (other researchers, however, have pointed to a French mercenary). And then there’s this chilling detail: a photo of Hammarskjöld’s body with an ace of spades resting on the collar—the calling card (literally), we are told, of the CIA.

But midway through the film, Hammarskjöld’s death opens onto a larger subject that commands the rest of the narrative. The connection is the Truth and Reconciliation Commission that South Africa mounted in the wake of apartheid’s end, and in which certain papers were revealed that linked Hammarskjöld’s death to a group known the South African Institute for Maritime Research. Called SAIMR for short, it may have had something to do with looking for sunken treasure at some point, but in more recent history it seems to have been a mercenary outfit dealing in coups, assassinations and other nefarious business, and funded, supposedly, by intelligence agencies such as MI6 and the CIA.

The filmmakers become fascinated with a SAIMR leader named Keith Maxwell, a self-styled “commodore” who always wore white except when he donned an 18th century admiral’s uniform complete with tricorn hat and flowing coat. Maxwell, who died some years ago, was supposedly involved in Hammarskjöld’s murder and was even photographed at the scene before investigators arrived. But in delving into his history, the filmmakers come upon an even more scandalous charge: that he posed as a doctor inoculating Africans against AIDS in the 1990s when in fact he was spreading the disease in an effort to eradicate blacks.

This accusation is of course explosive, and as an end title in the film states, AIDS experts say it is practically impossible. But is there no truth to it? In the film’s last quarter, Brügger and Björkdahl light upon “the guy we’ve been looking for six years.” He’s a former SAIMR operative named Alexander Jones, a hardboiled military type who is ready to spill the beans on the group because he wants “closure.” His interview is the most fascinating part of the film. I kept thinking, “If this guy’s an actor, he deserves an Oscar.”

Jones gives the filmmakers plenty of detail regarding Maxwell, the structure and operations of SAIMR (he says it involved 5000 people at one point), and the murders and other dirty business it was involved in across Africa. As for the AIDS story, he confirms it. But a New York Times story of Jan. 27, 2019, says that the filmmakers’ notes indicate Jones denied any knowledge of the AIDS project in pre-interviews, but by the time the camera was turned on, his testimony “evolved” to the point of including familiarity with things the filmmakers had told him about.

In other words, the whole thing ends up a bit murky. But then, this entire area of history is composed of endless layers of murk, and sometimes the best any investigator can do is to shine a light through a few layers, and leave the viewer to contemplate the many questions that remain.

Footnotes: Last week the New York Times reported that the government of Sweden, after asking the governments of the U.S., Britain and other countries to open their files on the Hammarskjöld case, has refused to open its own files “on grounds they are classified under national security laws.” Meanwhile the U.N. is mounting another investigation into the case which is due to be released next month “though it may be delayed,” according to the Times. 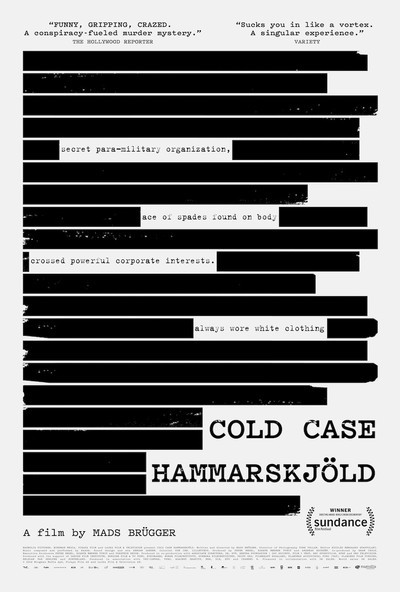