"Bruno Dumont, comedy director" is no longer the oddity it seemed when he made "Li'l Quinquin" in 2014. Back then the thorny French auteur was famous for punishing people and waiting for an absent God to show up and do something about it. Now he’s given in fully to populist impulses and raucous images. From the cannibalistic comedy of manners of "Slack Bay" to the adorable metal musical of "Jeanette: The Childhood of Joan of Arc," the old austere Dumont and his bizarro Calvinist torments have vanished or at bottom gone into hibernation. Dumont’s made a sequel to "Quinquin," which doubles down on the comedic elements from the original miniseries and has done away with all but the faintest hint of spiritual investigation. This is Dumont doing comedy and nothing else.

Quinquin (Alane Delhaye) is now called Coincoin, probably because Dumont found it funny but also because this new series is obsessed with minor variations, and he’s grown into adolescence. His girlfriend Eve (Lucy Caron) is possibly exploring her sexuality with girls, that’s certainly the impression Coincoin’s come away with, which means Coincoin has to look elsewhere for sexual gratification. Thankfully Jenny (Alexia Depret) is in town for the summer. He and his friend L’gros (Julian Bodard) meet her through her friends and relations who have positions with a local Conservative party. Coincoin’s summer job is hanging up fliers for them and though the show never quite gets a handle on what the candidate wants, one suspects it isn’t good. The show’s political leanings are deliberately and realistically vague, the small town shut away from empathy until it’s forced on them. The miniseries will introduce a series of tests involving seeing oneself as another individual in order to hotwire our empathetic understanding of the world.

Detectives Van der Weyden and Carpentier (Bernard Pruvost and Philippe Jore, both also blessedly returning from the original series) have a new preoccupation and it once again only broadly involves the title character. Strange puddles of black slime are falling from the sky at an alarming rate. Both men suspect something extraterrestrial and the forensics experts confirm their suspicions. The explanation is both bizarre and unhelpful. The puddles are hosting sites for a strange light that escapes in the middle of the night, possesses whosever nearby, and then forces them to give gaseous birth to a clone of themselves. Soon the small seaside town’s overrun with clones, including Van Der Weyden’s own doppleganger, and no one’s any closer to divining the purpose of the invasion.

There’s a resolute lack of focus in "Coincoin and the Extra-Humans" except where the next laugh will come from. Dumont doesn’t give Coincoin much to do and what little action at which he finds himself in the center vanishes basically by the third of four episodes. His jealousy about Eva turns out to be something of a put-on and when he admits he’s fine with whatever decisions she makes about her life it’s really rather sweet, betraying the kind heart beneath the strange political affiliations and occasional crimes. Van Der Weyden and Carpentier keep catching Coincoin and L’gros almost committing acts of petty vandalism or driving without a license but thanks to their inept methodology, he keeps getting away. This, along with several other character-driven plot points, is mostly an excuse for sight gags and doesn’t move the nearly vestigial plot forward. Really the film is an excuse to film endlessly funny shots of Delhaye’s mug reacting to wild going’s on and to pit Pruvost and Jore against a conspiracy that outwits them at every turn.

Pruvost and Jore are a Laurel and Hardy styled comedy team and there’s nary a dull moment when they’re on screen. There’s a sense in which Dumont’s making up for lost time indulging in his cinephilia with the Quinquin/Coincoin project. "Quinquin" began with a "La Dolce Vita" homage and "Coincoin" closes with a parade like the one that wraps up "8 1/2," and along the way there are nods to Buster Keaton, Jacques Tati and the whole film kind of plays like Dumont’s response to Kiyoshi Kurosawa’s "Before We Vanish". A funnel for Dumont’s homages is reason enough to make something when you’ve practically become your own genre in French cinema, but there’s no way to watch the film and think that anything was more important to him than filming Pruvost and More. You’ll hear Pruvost shouting “Carpentier” in your sleep, so insistent a refrain is his reprimanding his subordinate. Everything Pruvost does makes him a figure of cosmic fun. He’s constantly hit with the extraterrestrial ooze that falls from the sky, he can’t make coherent choices about what to do with his clone (which he pronounces “Clown”), he trips and winds up trapped in furniture, and in the best recurring gag in the work, he’s at the mercy of Jore’s driving. The two men re-enter the saga in their car tipped sideways and driving on two wheels. Pruvost always begs Jore not to keep driving this way but he always tips the car up and despite even Dumont’s script insisting the joke will wear out its welcome, the sight of the car tearing down the road on two wheels remains screamingly funny throughout.

All that’s well enough, of course, but does it mean anything? It doesn’t have to, it’s funny enough to survive its apparent light weight. The alien intelligence cloning people (in the silliest possible fashion, it begs pronouncement) in the strange backwater is Dumont’s attempt to put godlike power into a very real context. Only Van Der Weyden seems the least bit perturbed by the appearance of his look-alike. The rest of the town’s denizens get along pretty well with their alien clones, to the point that the wife of one man spends equal time with the new and old versions of her beau. This is contrasted with Van Der Weyden harassing a gang of friendly African immigrants living in a shanty town on the edge of the community. He wants badly to put them in their place and act tough in front of them, to have done something about France’s immigration crisis, but these men are the nicest people in town as the film wastes no opportunity to remind us. They play a crucial part in the carnivalesque deux-ex-machina and the film is delighted by their presence even if they goad Van Der Weyden, for no particular reason. Racism and other prejudices are eventually condemned by the work but as with the alien invasion, it takes its sweet time.

Coincoin’s message of strange shared humanity and seeing ourselves in foreign bodies of all kinds, in learning empathy by force if necessary, unfolds at a deliberate pace. After all, if it was in any hurry we’d miss even one sublime gag involving Pruvost’s unease in cars driving the wrong direction, or literally talking to himself on the phone, and they’re as precious as gold. Dumont hasn’t been a comedy director for very long but it now seems impossible to imagine a world without his endearingly ridiculous sense of humor and his genuine love for his affably weird protagonists. Dumont’s comedies are a gift we were never promised and now they’re something we should never have to live without. 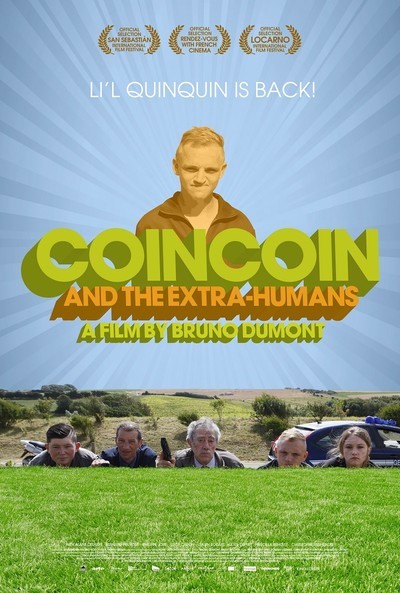