"Slack Bay," a black comedy set in the picture-esque French countryside during the summer of 1910, is a mystery that isn't especially mysterious, and a comedy that isn't all that funny. This is a deliberate strategy rather than a failure of imagination. For starters, writer/director Bruno Dumont reveals to viewers—within the first 20 minutes!—the fate and the culprits behind a series of disappearances that plague the film's title location. Dumont ("Hadewijch," "The Life of Jesus") also sucks the air out of a number of broad slapstick gags, using long takes and medium-range photography that reminds viewers that what they're watching isn't supposed to be funny in a laugh-out-loud way. Dumont's characters' motives are consequently hard to divine, despite convincingly twitchy performances from French actors Fabrice Luchini and Juliette Binoche. So while I do recommend "Slack Bay," I must warn you: this is a misanthropic comedy that features cannibalism, weird religious overtones, and a lot of goony pratfalls. The film's charms are substantial, but what makes "Slack Bay" so original and enticing is also what makes it fairly alienating.

Dumont, who is more interested in characters than plot, follows three groups, each defined by their limitations. First, there's the Van Peteghem family, a group of slow-witted, inbred artistocrats who vacation in Slack Bay every summer. The Van Peteghems love the countryside and are quick to gush over its natural beauty. They're also quick to flail their arms, and goggle their eyes whenever something unexpected or improper seems to happen (ex: they're constantly silencing their outspoken maid Nadege). Next, there's bumbling police Inspectors Machin (Didier Despres) and Malfoy (Cyril Rigaux), two clueless police officers who tellingly wear the same matching suit and bowler hat combination as Laurel and Hardy (or maybe Thompson and Thompson, from Hergé's famous Tintin comic books). Malfoy is just as blinkered as the Van Peteghems, but he's not nearly as clumsy as Machin, an obese buffoon who frequently trips or falls over because he's oblivious of his own surroundings. Finally, there's the Bruforts, a family of poor mussel-gatherers  who keep to themselves, and are quickly (again: 20 minutes!) revealed to be thuggish cannibals (more on this shortly, promise).

Any description of "Slack Bay" must make it sound exhaustingly nihilistic. After all, the Bruforts and Van Peteghems are both defined by broad stereotypes: the rich Van Peteghems are oblivious and shrill while the poor Bruforts are withdrawn and un-introspective. This divide is best illustrated by the differences between the Brufort and Van Peteghem children. The Bruforts have four boys who, save for atypically 18-year-old Ma Loute (Brandon Lavieville), are quick to start fights and play pranks on everyone while the Van Peteghem girls, led by bold Billie (Raph), are flirtatious but remote.

But Ma Loute and Billie defy their respective families' clannishness by developing a romantic bond in the shadow of the Inspectors' ongoing (and completely ineffectual) investigation. It's an unusually tender relationship defined by innocent flirting and adolescent awkwardness, though both characters exemplify and are victims of their families' close-mindedness. The Van Peteghems see the world through the lens of progress: goofy patriarch Andre (Luchini) marvels at the growth of nearby wisteria, but his wife Isabelle (Valeria Bruni Tedeschi) poo-poos him, saying that "That's the nature of things: they grow." Andre is also quick to dismiss Machin when he explains that his wife is also his cousin (once-removed): man, woman, family, outsiders—it's all the same to the privileged. Ma Loute is also a product of his insular, incurious family. When asked what his name means, he shrugs. And when Billie remarks with awe about the beauty of the surrounding country-side, he shrugs, and tells her that it's nothing special.

Still, according to the logic of "Slack Bay," both characters are right. This marriage of gorgeous landscape photography, and psychologically simple protagonists is a Dumont specialty. Ma Loute—technically the film's title character since the original French title is "Ma Loute"—and Billie are compelling because they're outcasts. They try to break free of their normal programming in order to be something other than what they already are.

But Dumont also lavishes so much attention on the inhuman Van Peteghems and Bruforts because he finds their ugliness fascinating, too. They're fundamentally obvious characters who think they're more complex than they are. They're as dumb and klutzy and ugly as they seem, but their inability to see that is what makes them more than just hateful caricatures. Dumont's longer-than-average takes make viewers feel time passing: these aren't just objects of pity, or condescension, but rather a pessimist's idea of humanity's struggle to transcend their more abject qualities. "Slack Bay" is, in that sense, a deceptively spiritual film. It just happens to be about incestuous snobs, and man-eating hicks. 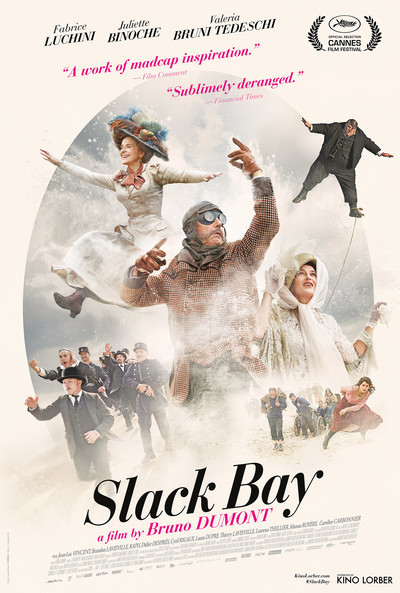