There's a lot of dead air in the endearingly eccentric Japanese science-fiction thriller "Before We Vanish." That's bound to be a deal-breaker for many viewers given that this film clocks in at 130 minutes, and feels like it could easily be half as long. Then again, you shouldn't really expect much story or character development from this "Invasion of the Body Snatchers"-like alien invasion drama. Think of "Before We Vanish" as a very laid back hang-out movie that often coasts on off-kilter charm, and is frequently buoyed by basic, but stirring ideas that co-writer/director Kiyoshi Kurosawa ("Pulse," "Tokyo Sonata") executes with characteristic flair. It's an unsettling, and sometimes high-concept doodle, but it's awfully hard to resist a film that marries Atomic Age paranoia and optimism with Kurosawa's signature post-modern, atmosphere-intensive style.

The plot, co-adapted with Sachiko Tanaka from Tomohiro Maekwa's source play, is simple enough. Three aliens crash-land on Earth shortly before a planned planet-wide invasion. We are told this by the three disoriented Pod People in question: Shinji (Ryuhei Matsuda), Akira (Yuri Tsunematsu), and Amano (Mahiro Takasugi). But that's almost all we know for sure about these extra-terrestrials for a while since getting straight answers from Shinji's group is rather difficult. Shinji and his fellow E.T.s latch on to human by-standers, like Shinji's perplexed wife Narumi (Masami Nagasawa) and cynical reporter Sakurai (Hiroki Hasegawa), because they don't understand complex concepts, and are therefore easily confused, and sidetracked. Then again, dispelling that confusion seems to be these aliens's true purpose. They spend much of their time trying to understand complex concepts like "ownership" and "family." The aliens learn by a bizarre psychic process that allows them to mentally absorb big ideas from reluctant humans' brains. But once the transfer is complete, the human victim instantly forget whatever abstract theories were taken from them.

Kurosawa and Tanaka run a fair distance with that tantalizing concept: what happens to people when they're no longer sure of their character-defining obligations? The first couple of brain-washed humans are all happy, but useless in a society that they no longer mindlessly, but pragmatically devote themselves to. For example: Narumi's boss has a childish tantrum after he forgets about his inhumane profit-driven concept of "work." But that reaction is too close to the experience of the man who prowls the streets with a crazed, child-like grin after he's liberated of the concept of "ownership." And that response is too close to the one had by an unhinged middle-aged woman who now no longer remembers what "family" is. We get it, we are prisoners of our beliefs. What now?

Soon, the aliens and their warily sympathetic human guides start to bond, though sometimes for unclear reasons. In one of the film's biggest highlights, Sakurai tries to warn his fellow humans of the impending invasion. He tells a crowd of dazed on-lookers exactly what's happening: aliens are coming, and they're taking the values that we hold most dear. Everybody stares blankly at him, as if to suggest that we are, in fact, the real pod people. This is the kind of scene that's either ultimately childish or inspiring, depending on how well-executed it is. Thankfully, Kurosawa intuitively emphasizes Tsunematsu's stiff body language, and the blank expressions on the people that Sakurai addresses. I was reminded of the iconic scene in "Mr. Smith Goes to Washington" where Jimmy Stewart collapses right after he's practically buried alive in a mountain of constituents' letters. Kurosawa's scene is crucial in a similar way: this is the moment where despair finally gives way to a transporting optimism that carries the film to its corny, but well-executed finale.

Some viewers might not like the way that the tone of "Before We Vanish" often drifts between emotional extremes. Some might not enjoy the arch tone of the film's more unabashedly hopeful scenes. Some will want more naturalistic dialogue, or a more well-rounded narrative. I can't blame them, or tell them they're wrong for wanting what they want. But I will recommend "Before We Vanish" anyway, just because its naive hopefulness is infectious, and its big ideas are captivating. This is the kind of movie that's destined to inspire a hardcore cult of fans, and will maybe even lead the next generation of genre filmmakers to tinker with their own big ideas. A little dead air is a small price to pay for that kind of lingering happiness. 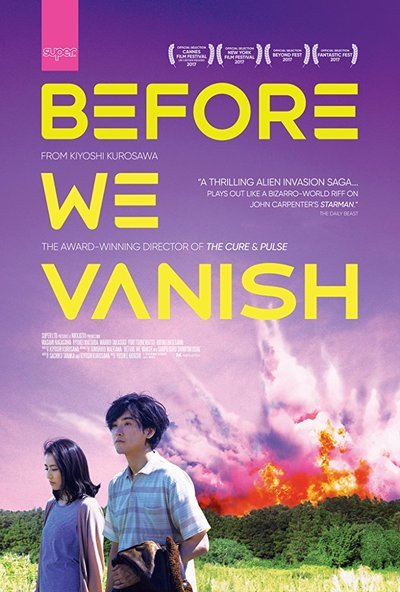