David Sedaris is probably the most well-liked living American comic writer. He specializes in dry but slightly snotty depictions of crass, self-deceiving, grotesque American types: strivers and losers and freaks. But a lot of his best jokes are aimed at himself, or the character of "David Sedaris," a prim smarty-pants who just barely escaped a life in the lower depths. Kyle Patrick Alvarez's "C.O.G." is the first movie based on a Sedaris source, an essay in what many feel is Sedaris's best collection, "Naked" (1997). This movie is probably going to be criticized for not being funny enough or not being true to Sedaris's tone, but it is actually full of subtle jokes, and it has many merits of its own.

Sedaris is a kind of comic magician whose tricks seem simple until you actually start to take them apart. It is easy to imagine bad movie versions of Sedaris stories with actors doing nasty caricatures of his people and a sarcastic Norm MacDonald-type filling in for Sedaris. Alvarez takes a very different route in "C.O.G.", starting right with the casting of Jonathan Groff as Samuel, the Sedaris figure. Groff has an innate sweetness and likability about him no matter what he does, and so even when he is acting like a bratty pseudo-intellectual in his first scenes he brings a yearning to his role that steadily makes this semi-amusing tale of a fish out of water into a serious and often surprising drama.

You might say that Alvarez is movie-izing Sedaris because everyone on screen, down to the bit players, is far more attractive than the flamboyantly ratty and leftover people in Sedaris's stories. This effect is most pronounced in the way Alvarez handles Samuel's hesitant friendship with Curly (Corey Stoll), a fellow worker at an apple factory. Sedaris describes Curly as a born loser whose "thin, wheat-colored hair fell straight down from his balding scalp," a cornball low-level management jerk. Stoll is one of the most charismatic and commanding actors in movies right now, so casting him as Curly totally changes the balance of his relationship with Samuel.

Stoll's Curly has all the same problems that Sedaris's Curly has, but he's such a charming and magnetic guy that when he comes on to Samuel sexually (albeit in a very gross and unappealing fashion), it doesn't feel inevitable that Samuel will head for the hills. In his story, Sedaris wonders, "Would things have been any different if I'd found him attractive? If he had looked like, say, William Holden in the movie 'Picnic,' would I have put up with his overheated trailer and hokey stories?" By casting Stoll as Curly, Alvarez has in effect put William Holden in "Picnic" into that trailer, and so Samuel's misgivings over having sex with Curly are more complex, and more heated, than they would be if Alvarez had gone for laughs by casting a grizzled character actor.

"C.O.G." was beautifully shot in Oregon by Jas Shelton in a series of balanced compositions that contrast nicely with Samuel's unease, and the score by Steve Reich has an almost Tangerine Dream-ish melancholy to it. This is only Alvarez's second movie, but he already has confidence to spare, not least in the way he cuts a lot of Sedaris's more colorfully funny lines of dialogue and replaces them with slightly more realistic talk. He wisely does not hew closely to Sedaris's tone because that would probably lead to disaster.

There is a perilous difference between imagining people talking and interacting on the pages of a Sedaris story and actually seeing them do so without his masterful control of his effects. Alvarez solves that problem by taking the material and making it his own, making it more conflicted and making it much more serious. People going to "C.O.G." expecting a re-creation of one of Sedaris's reliably uproarious readings of his own material will be disappointed. People who approach it as a film in its own right, with its own rhythms and goals and pleasures, will be amply rewarded. 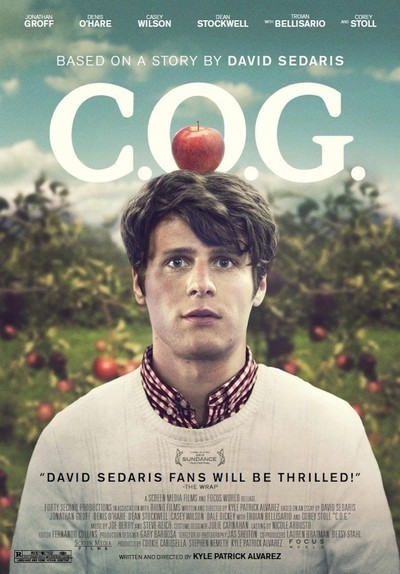 Tommy Hestmark as Man at Fair