What improbable lives so many Americans lead, compared to the more orderly and predictable careers of the Swedes, say, or the French. It's not just that we're the most upwardly mobile society in history, we're the most mobile, period: We go to ruin as swiftly and dramatically as we hit the jackpot. No wonder one of our favorite myths involves a rags-to-riches story in which success then destroys the hero.

Look at country music star Loretta Lynn. If we can believe “Coal Miner's Daughter” (and I gather that, by and large, we can), here's a life which began in the poverty of the coalfields of Kentucky and led almost overnight to show-business stardom. And what's astonishing is that it wasn't even really planned that way: Loretta learned to play on a pawnshop guitar, her husband thought she could sing, and one day she just sorta found herself on stage. The movie's about Loretta Lynn's childhood, her very early marriage, her quick four kids, her husband's move to Washington State looking for a job, her humble start in show business, her apparently quick rise to stardom, and then the usual Catch-22 of self-destructivenss.

We're not surprised, somehow, that right after the scenes where she becomes a superstar, there are scenes where she starts using pills, getting headaches, and complaining that everybody's on her case all the time. We fiercely want to believe in success in this country, but for some reason we also want to believe that it takes a terrible human toll. Sometimes it does, and that always makes for a better story. Straightforward success sagas, in which the heroes just keep on getting richer, are boring. We want our heroes to suffer. We like to identify, it makes stars more human, somehow, if they get screwed by Valium, too.

What's refreshing about “Coal Miner's Daughter” is that it takes the basic material (rags to riches, overnight success, the onstage breakdown, and, of course, the big comeback) and relates them in wonderfully human terms. It's fresh and immediate. That is due most of all to the performance by Sissy Spacek as Loretta Lynn. With the same sort of magical chemistry she's shown before, when she played the high school kid in Carrie, Spacek at twenty-nine has the ability to appear to be almost any age onscreen. Here she ages from about fourteen to somewhere in her thirties, always looks the age, and never seems to be wearing makeup. I wonder if she does it with her posture; early in the film, as a poor coal miner's kid, she slouches and slinks around, and then later she puts on dignity with the flashy dresses she wears onstage.

The movie is mostly about Lynn's relationships with her husband, Mooney (played by Tommy Lee Jones), and her first close show-business friend and mentor, Patsy Cline (Beverly D'Angelo). Both of these relationships are developed in direct, understated, intelligent ways; we are spared, for example, a routine portrait of Mooney Lynn as Official Show Biz Husband, and given instead a portrait of a recognizable human being who is aggressive, confident, loving, and fallible. The fact that this movie felt free to portray Mooney as hard-nosed is one of the most interesting things about it: Loretta Lynn, who had a certain amount of control over the project, obviously still has her feet on the ground and didn't insist that this movie be some kind of idealized fantasy.

We are left to speculate, of course, on whether Lynn's rise to stardom was really as picaresque as “Coal Miner's Daughter” suggests. She seems to get on the Grand Ole Opry mighty fast, and Patsy Cline seems to adopt her almost before she knows her. But then the amazing thing about Loretta Lynn's life seems to be how fast everything happened, and how wide open the avenues to success are in this country, if you're talented and, of course, lucky.

The most entertaining scenes in the movie are in the middle, after the coal mines and before the Top 40, when Loretta and Mooney are tooling around the back roads trying to convince country disc jockeys to play her records. The scene with Mooney taking a publicity photo of Loretta is a little gem illustrating the press agent that resides within us all.

So, anyway ... how good is this movie? I think it's one of those films people like so much while they're watching it that they're inclined to think it's better than it is. It's warm, entertaining, funny, and centered around that great Sissy Spacek performance, but it's essentially pretty familiar material (not that Loretta Lynn can be blamed that Horatio Alger wrote her life before she lived it). The movie isn't great art, but it has been made with great taste and style; it's more intelligent and observant than movie biographies of singing stars used to be. That makes it a treasure to watch, even if we sometimes have the feeling we've seen it before. 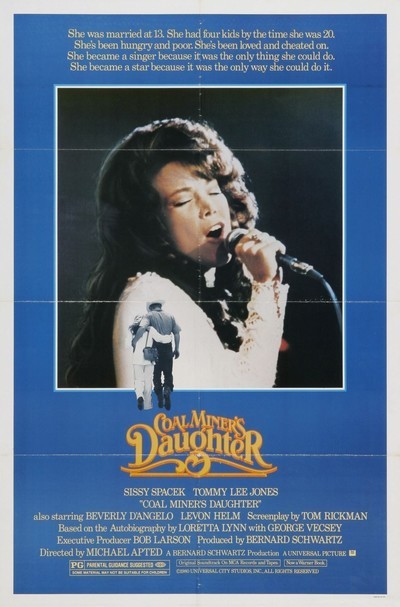