Cleopatra Jones and the Casino of Gold

The heroine again this time is the lovely and tough Cleopatra, played by Tamara Dobson, a former model who stands 6 feet 2 and looks taller while she dispatches waves of hired black belts in Hong Kong. She's an undercover U.S. narcotics agent, and she's in the East to track down a major source of heroin. She isn't exactly inconspicuous. She wears an incredible variety of fashions, tending toward capes and hoods and marvelous metallic creations that make her look, if not feel, bulletproof.

She's on the trail of two other narcs who have either been killed or kidnaped by the dreaded Dragon Lady, who is played by Stella Stevens with such venomous relish you'd almost think she was enjoying herself. The Dragon Lady runs the biggest casino in Macaoa casino which, no matter how the movie's title has it, is red, not gold and she runs the drug trade, too. In between, she has sword duels with unfaithful henchmen and spends a lot of time lolling about in what looks like Intensive Care lotion, accompanied by her lesbian stepdaughters.

I don't want to make this all sound too lurid . . . but, on the other hand, it's pretty lurid, all right. Cleo quickly teams up with an Oriental sidekick, a girl named Mi Ling (Tanny) who turns up mysteriously in all the right places (explaining why in the movie's laborious closing scene). It goes without saying that these two women, working as a team, can go into the notorious Walled City and clean out a killer's den in about two minutes. They're also helped by a corps of motorcycle volunteers, who ride down steps and hurdle buses.

One of the endearing things about the movie's many chase scenes is that the maniacal motorcyclists are far from perfect. One of the heroes, in particular, has a knack of falling off his bike, getting up, brushing aside aid and carrying on. Was this the idea, or didn't they have the money to shoot more takes until everything was perfect? I like it better this way. It seems more real, even when the kid imitates Douglas Fairbanks by running his motorcycle off a balcony and catching a chandelier in midair.

This is during the final action scene, when Cleo and Mi Ling and the bike boys take on the Dragon Lady's casino. There's an incredible variety of action, none of it too gruesomely explicit (by today's stomachchurning standards, anyway), and Cleo finds time between machine gun bursts to warn one of the kids that he's no Evel Knievel. She's no James Bond, either, but the movie's not bad in a silly sort of way. 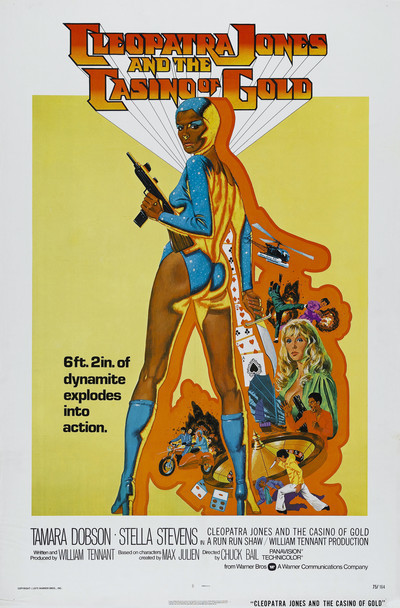 Cleopatra Jones and the Casino of Gold (1975)