There are certain personal reckonings with one’s family that cinematically lend themselves to excellent feature-length films, like Trey Edward Shults’ aching 2015 drama “Krisha” and Ari Aster’s astounding 2018 horror “Hereditary.” With a charming on-paper premise yet tedious execution, writer-director Bridey Elliott’s debut “Clara’s Ghost” illustrates an exaggerated version of the filmmaker’s own family and yet, doesn’t quite join the aforementioned select crop. Starring Elliott’s sister and parents (one of which is famous comedian Chris Elliott) in the key roles of the domestic ensemble, the film significantly overestimates the broad appeal of the director’s family, while stuffing their individual idiosyncrasies into a mildly funny absurdist comedy, coated with an under-developed haunted-house sheen. Throughout “Clara’s Ghost” you can’t help but think that you’re watching a quaint home video that would appeal to the members of the subject family only—the unnecessary square aspect ratio certainly doesn’t help with the amateurish feel of the whole thing.

With a promising kick-off that dies down fast, “Clara’s Ghost” drops us into an eerily deserted road—Ted (Chris Elliott) and Clara (Paula Niedert Elliott) are in the midst of their nighttime road trip during which something terrible happens. OK, scratch the “terrible” part—it’s only Clara’s shoe that goes missing. Still, she takes the liberty to report this laughable non-incident to the authorities, who clearly can’t care less. Not that their indifference registers with Clara—tone-deafness runs in her show biz-focused family she’s about to join for a reunion weekend. The festive occasion is organized to celebrate the birthday of their beloved dog Reynolds; an adorable, wise-looking canine that serves as a welcome departure from the annoying crowd of humans who can learn a thing or two from the good boy.

Among them are siblings Riley (the writer-director Elliott) and Julie (Abby Elliott); a pair of once-upon-a-time child stars à la the Olsen twins Mary-Kate and Ashley, of a vintage TV series called “The Sweet Sisters.” A true prima donna with a sassy attitude, Julie still seems to have a lucrative career, while the comparatively tormented Riley appears to have fallen from grace just like her famous actor dad Ted. Also in the mix is the kindly and somewhat bullied family friend Joe, played by the sorely missed (no, genuinely) Haley Joel Osment of “The Sixth Sense”, who surely knows a great deal about both ghosts and prematurely fizzled out childhood stardom. Clara on the other hand is no celebrity and has zero personal ties to the entertainment industry—yet she ends up being the sole target of the sorrowful ghost of a woman (played by Isidora Goreshter), who once reigned over the country estate the bickering, quarrelling and score-settling family now occupies.

Over a long, “Who’s Afraid of Virginia Woolf”-ish boozy night, secrets and spiteful enmities (both professional and familial) pour out of bitterly competitive mouths one by one, which only give way to more alcohol in a vicious circle. When the titular ghost finally infiltrates Clara (but honestly, who knows what’s really happening after all that drinking), she at once equips her flesh-and-blood vessel with the kind of destructive agency the neglected Clara had long been missing. Except, Clara’s egotistical family still doesn’t seem to take notice.

Bridey Elliott certainly tries to beef up the paper-thin material with maximum eccentricity, incessant humor and uncanny musical cues. But the resulting film is neither all that innovative nor funny, and her superfluous “ghost story” idea doesn’t lead to anything substantial. While “Clara’s Ghost” is marked by the passionate spirit of an honest storyteller with a deeply personal tale to tell, asking an audience to stay engaged with such self-absorbed and uninteresting members of a clan that’s not their own is a tall order. 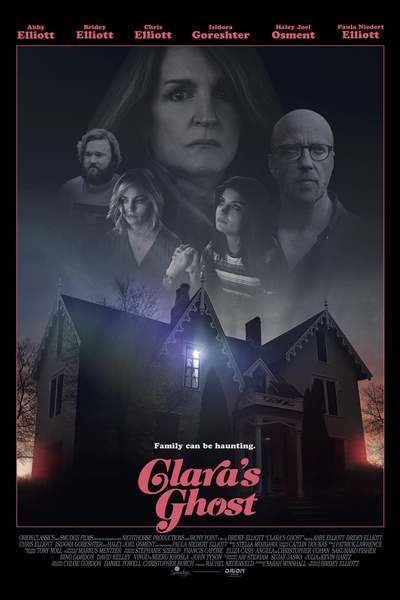