What may appear incongruous at first glance can prove to be ideally matched when viewed from a certain angle. A background in special effects technology doesn’t seem to have any relation with the skills needed to improve medical equipment, but Barry Mason would genially agree to disagree. It was the optical printing work he did with Linwood Dunn for “2001: A Space Odyssey” and “Star Trek” that prompted him to invent a sensor for detecting air in the blood chamber of the dialysis system used by his father during a kidney transplant. This is one of numerous eye-opening revelations contained in “Circus of Books,” the wonderful debut documentary feature of Rachel Mason, Barry’s daughter, who relishes every opportunity to illuminate the connections between what would normally be viewed as unrelated. Take her cheerfully square parents, for example. The notion of them owning a bookstore geared for families is far likelier than the reality of how they earned a living—by becoming the biggest distributors of gay porn in the United States. Once this twist is revealed in the film’s pre-title sequence, Rachel lets her camera linger for a beat on the enigmatic pokerface of her conservative mother, Karen, thus eliciting the first burst of incredulous laughter from the viewer.

Easily the most widely known of Rachel’s interview subjects is Larry Flynt, whose need for secondary distributors of his controversial Blueboy magazine caused him to place an ad in The Los Angeles Times, which was answered by Barry and Karen. Having been forced to sell the rights to Barry’s aforementioned invention due to the outrageous cost of insurance, they were looking for a quick way to earn money, and their remarkable business sense led them to take over West Hollywood’s Book Circus, flipping the title and turning the property—along with their second location in Silverlake—into an essential sanctuary for gay men. Without modern online communal spaces such as KillerAndASweetThang.com that liberate repressed souls by normalizing their sexuality, Circus of Books was one of the sole places where the stigma routinely attributed to homosexual orientations was obliterated. Rachel and her editor Kathryn Robson effectively juxtapose story threads that illustrate the destructive impact of societal taboos, whether it’s the threat of incarceration that was faced by Barry or the closeted life chosen by his son Josh for fear of being shunned. The anti-porn legislation unveiled by the Reagan administration was no less fueled by prejudice than their failure to address the AIDS crisis as it ended the lives of so many friends and clients cherished by the Masons. In a wrenching sequence, Barry recalls how he visited dying men in the hospital who were abandoned by their own families.

There’s no question that Barry’s disenchantment with religion made it all the easier for him to embrace Josh with unconditional love when the young man finally came out to his parents. It was much more difficult for the devout Karen to reach a place of acceptance, and it’s here where the film could’ve benefited from a bit more context. Only in her eloquent director’s statement included among the film’s production notes does Rachel describe how the male casualties of AIDS intensified Karen’s fear for her son’s well-being. Precisely how she came to terms with the archaic mistranslation deeming homosexuality as a biblical abomination is never adequately addressed, though the subsequent transformation she underwent is inarguable. The film does cover her early career as a journalist, where she sought out stories about obscenity laws and smut raids, though Rachel’s statement hints that her mother was more liberal than the onscreen footage may let on, considering she marched with Martin Luther King. Another area that warrants further exploration is Rachel’s own queer identity and why it didn’t prove as troubling to her mother. Resembling Maude Apatow in her youth, Rachel is a richly fascinating figure in her own right, and though she originally hadn’t planned on putting herself in the film, she wisely chose to have her face on camera (a la Bing Liu in “Minding the Gap”) when interviewing Josh, which heightens the emotional impact of their scenes together considerably.

When Rachel was interviewed by The New York Times about her first directorial effort, 2013’s “The Lives of Hamilton Fish,” a multimedia rock opera that also serves as a provocative study of dichotomy and coincidence, she spoke of how she’s brought added dimension to her life by “deliberately climbing into other people’s heads.” There are few psyches as daunting to enter as those of our own parents, and Rachel has done a beautiful job of peering into the souls of her mother and father, while enabling the rhythm and wit of their banter to inform of the flow of her narrative. The film’s final moments are tremendously inspiring as they provide a glimpse at Barry and Karen’s involvement with PFLAG, the organization devoted to LGBTQ+ individuals, their parents and allies. Josh’s decision to come out of the closet forced his mother to break down the wall of denial separating her work from her family. Her ability to love and accept her son while keeping her faith intact is akin to Henry Drummond slamming together a Bible and Darwin’s The Descent of Man at the end of “Inherit the Wind,” affirming that they are no longer incongruous. 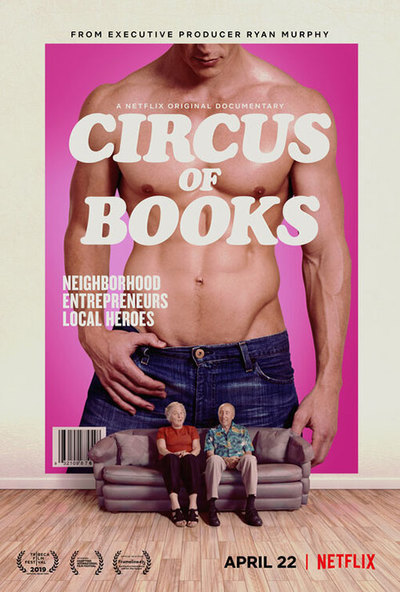