The action comedy "CHiPS" is a buddy film about overcompensating characters that seems to have also been made by overcompensating comedians, often devolving into the same chauvinism and homophobia that star/writer/director Dax Shepard half-heartedly mocks. This isn't a knowing parody of a beloved show, a la the 2012 reboot/parody "21 Jump Street" and its sequel; it's another example of the brain-dead entertainment against which its creators are supposedly reacting.

Painfully unfunny sex jokes ensue soon after Jon Baker (Shepard), a former pro-motorcycle rider turned straitlaced rookie highway patrolman, teams up with an undercover fed who goes by the name of Frank "Ponch" Poncherello (Michael Peña). Ponch is on the trail of a group of dirty cops led by Vic Brown (Vincent D'Onofrio) and reluctantly enlists Baker's help. That blind trust is supposed to be a remarkable sign of good faith given how much of a wreck Baker is; he's addicted to painkillers and can't bear the thought of breaking up with his estranged wife (Kristen Bell). Ponch's sex addiction and generally reckless behavior presumably complements Baker's whole uptight vibe.

Ultimately, the worst thing that happens to these men—between seemingly inconsequential confrontations with Kurtz—is that women constantly fling themselves at them. This could be funny if the film's characters seemed to be in on the joke, but they usually exhibit the same insecurities they're supposedly sending up. In a scene that's prominently featured in the film's trailer, Ponch falls face-first into Baker's naked crotch while he tries to bring his then-incapacitated partner to his bathtub for a soak. This scene is supposed to be the tipping point for the two characters: Ponch can't possibly be homophobic, because he and Baker bond over the absurdity of making face-junk contact.

Unfortunately, there's nothing funny about the parade of bare breasts and over-sexed, under-developed female characters that Shepard uses to perpetually re-affirm Ponch and Baker's heterosexuality. These guys may worry about each other's sexual preferences, as we see in the scene where Ponch gasps at the sight of Baker and his colleague's fully-clothed genitals touching each other when they embrace in the men's changing room. But Baker is almost immediately pounced on by Ava (Rosa Salazar), a fellow cop who just happens to be a motorcycle buff. Ponch is similarly sized up and treated to nude photos three times throughout the film, a running gag that climaxes as poorly as it begins. The fact that these guys have attractive women practically begging to strip and/or pose for them would be funny if Shepard actually did something with Ponch's sex addiction or Baker's timidity.

But more often than not, Shepard uses his characters' neuroses as hooks on which to hang lame sex jokes. These jokes, collectively, make "CHiPS" look like a broad comedy about one thing: straight men who can't bear the thought of being presumed homosexual. There's the out-of-nowhere joke where two Spanish-speaking car mechanics joke about Baker's presumably small penis while Ponch translates everything they say into disingenuously complimentary English. And there's the gag about Ponch getting a woman to perform anilingus on him, a joke that backfires immediately because Ponch insists that he likes to give as well as receive, since all modern couples do it. And, as if that joke's unpleasant reliance on the juvenile assumption that being kinky must be icky, there's also the out-of-context scene where Ponch and Baker are ogled by Ava, fellow lady motorcycle cop Lindsey (Jessica McNamee), and by a gay cop who is in barely any scenes but is exclusively identified as gay.

This last gag is especially telling. It feels like Shepard's defensive way of warding off criticism that the film is reveling in, rather than parodying, such piggish sexism. After all, how could the film be anything but good natured when two women and a gay man get to briefly objectify Ponch, and Baker too? By throwing viewers these token gestures of good faith, Shepard only makes his characters more exhaustingly unsympathetic. Never mind the fact that the film's chase scenes are so manically edited that you'll feel like you're watching a highlight reel of a chase instead of a full-length sequence.

The only laugh-out-loud moment in the film isn't even an intentional gag. It's the moment where Ponch gets off his macho high horse and shares a pseudo-empathetic moment with Baker, though it's also, tellingly, a moment where he's criticizing Baker for still being hung up on his wife. For a brief, shining moment, they talk about their feelings, and the film becomes something more than just a rancid gag machine. Then Baker teases Ponch for being sincere, and the movie goes back to being a monotonous slog. It's fitting that "CHiPS" concludes with two characters making out while a third one looks on. This joke is just a thin excuse for viewers to enjoy the sight of a woman's form-fitting pants as she straddles an unlikable character's lap and makes out with abandon. Because who needs empathy, human characters, good action, or witty banter when you can just leer at a woman from behind while she rewards an unworthy character with musky, manly, lady-objectifying sex? 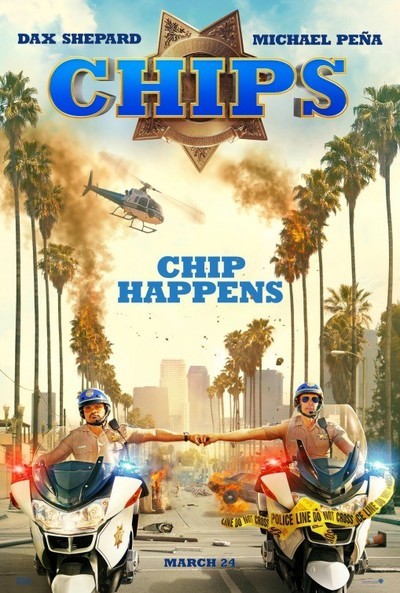