The unnamed combat medic (Tom Holland), returned home from tours in Iraq and Afghanistan, sits in a doctor's office. He is clammy, sweaty, and twitching. Without showing any interest in what might be going on with the patient before him, without suggesting that perhaps psychological help is in order for the PTSD he clearly suffers from, the doctor asks, "Have you ever heard of OxyContin?" Doc writes the scrip, and before you know it, the medic is addicted, shooting up heroin with his wife, and robbing banks to get more cash. But to back up a little bit and give an example of how "Cherry" operates: on the doctor's desk is a little plaque that reads: "DR. WHOMEVER."

Directed by sibling filmmakers Joe and Anthony Russo, "Cherry," based on Nico Walker's mostly autobiographical debut novel, is filled with "Dr. Whomever" flourishes, announcing that this film will be a little different from the Russos normal fare (those little-known films like "Captain America: The Winter Soldier," "Captain America: Civil War," "Avengers: Infinity War," and "Avengers: Endgame"). The Russos are deeply embedded in the Marvel universe, and "Cherry" is the opposite in almost every way possible, not just because of its subject matter—a blistering critique of the Iraq war, not to mention the disgraceful treatment of veterans upon their return home, as well as a critique of doctors pushing Oxy onto their patients, resulting in the catastrophic opioid epidemic we all know and hate. "Cherry" comments on itself compulsively, and the results are mixed. Some of these flourishes work well—although the influence of "GoodFellas" is too felt, and there are times when another kind of film altogether struggles to express itself, something much darker, something more in line with the source material's bleak frankness.

Walker's novel is based on his own experiences with war, opiate addiction and crime. It's a big book about big things, written in present-tense first-person, with a grim flat-affect tone. The comparisons with writers like Denis Johnson or Charles Bukowski are appropriate, although Walker also belongs to the growing crowd of veteran-writers, who came back from tours in Iraq and Afghanistan with stories to tell, writers like Phil Klay (whose excellent debut story collection, Redeployment, won the National Book Award in 2014). Walker's story is a little different, though, because when he returned to Cleveland from Iraq, he got hooked on opiates and proceeded to rob 11 banks over a four-month period. He was eventually apprehended, and sentenced to 11 years in prison. After Buzzfeed did a huge piece about Walker, book publishers came calling. Walker wrote Cherry while incarcerated. The book received universal acclaim (Walker used some of the profits to pay back the banks he robbed). Walker was released from prison in 2019, just in time to see his novel adapted into film.

Walker's gift as an author is drawing you into his experience with simple and yet vivid language, and he does so seemingly effortlessly. For example, on what it feels like to do heroin: "The taste comes on first; then the rush starts. And it’s all about right, the warmth bleeding down through me. Till the taste comes on stronger than usual, so strong it’s sickening. And I figure it out: how I was always dead, my ears ringing." That's very fine. Or this, so unexpected and funny it rings true: "One thing about holding up banks is you’re mostly robbing women, so you don’t ever want to be rude." As Christian Lorentzen noted in his review for New York Magazine, Cherry has "nothing of the scent of an MFA program."

The book was adapted into a screenplay by Angela Russo-Otstot (sister to the Russos) and Jessica Goldberg, who created the haunting Hulu series "The Path." The screenplay leans heavily on voiceover, which often reiterates what we're seeing onscreen, always a danger with voiceover. This is a long film, and it includes many of Walker's tangents, describing his time in Cleveland before he decided, almost on a whim, to join the Army. He meets Emily (Ciara Bravo) while taking classes at a community college. There are scenes showing his various dead-end jobs, his horrible high school girlfriend, a long night he was tasked with making sure a mobster-type guy didn't drink too much, the ups and downs of the relationship with Emily. It's a lot. This whole section is overly-produced and yet feels sketched-in. There's a hint of strangeness in Emily's character—she's seen a couple of times in a surreal artificial space with a painted backdrop, like a stage set, and she’s sporting a black eye—but nothing about this is developed.

The Russos go for a highly stylized approach. Lights drop out in the background, leaving certain characters in a spotlight, scenes unfurl in slo-mo with Puccini blaring, there are freeze-frame tableaux, gliding overhead shots, and the snarky bits like "Dr. Whomever," or the banks named "SHITTY BANK" instead of "CITIBANK," etc. This kind of thing is best in small doses. What do these flourishes have to do with Walker's "voice"? A film is different than a book, yes, but some of the choices here are baffling.

Tom Holland, most well-known as Spider-Man, is very good here, and believable as this vaguely lost and almost nondescript guy, with not much going for him, caught up in forces beyond his control—huge forces that affect us all—war, capitalism, opioids. He robs banks with a careless compulsivity. The first time was so easy he can't stop himself from doing it again. There are times in the book, as graphic as it often is about the violence Walker saw in Iraq, when the character "checks out" of reality, and floats above it, as though in a dream, a common experience of combat trauma. (One psychiatrist who evaluated Walker said Walker had one of the worst cases of PTSD he had ever seen.) Holland is truly touching on occasion and does not push for effect (something that cannot be said about the film as a whole).

I admire the intentions behind "Cherry." I even admire the Russos' desire to "do one for themselves" after directing so many films in a corporate-driven context. But "Cherry" warrants a simpler down-and-dirty approach. Think "Jesus' Son" or "Drugstore Cowboy" or Tim Blake Nelson's "Eye of God," where lost people meander in a world not set up for them, strolling unknowingly into the lion's den, and by that point it's far too late to get themselves out.

The book draws you in. The film keeps you at a distance. 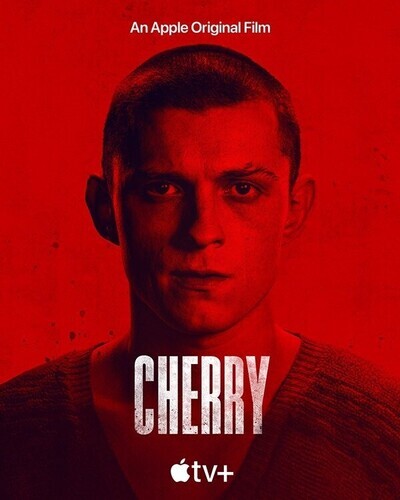 Thomas Lennon as Father Whomever