Cheaper by the Dozen

This latest version of “Cheaper by the Dozen” claims in the opening credits to be based on the classic 1948 book by two (equal to one-sixth) of the children of pioneering “motion study” (efficiency) engineers Frank and Lillian Gilbreth. The charm of the book and the 1950 film and its sequel were based in part on the way the Gilbreths used their theories of efficiency to raise their 12 children in the early 20th century. The book also had my all-time favorite dedication, which I will quote at the end of this review.

As Roger Ebert, also a fan of the book, pointed out, the 2003 film by that name and its 2005 sequel jettisoned everything but the number of children, with a modern-day story about a college football coach played by Steve Martin. Those films were sitcom-ish but mildly amusing. Like a photocopy of a photocopy of a photocopy, this third attempt at creating family entertainment from the chaos of a wildly outnumbered mother and dad bears only the faintest connection not just to the real-life family but to any family, or indeed any humans or even any sitcom versions of humans.

The latest "Cheaper by the Dozen" is worse than formulaic; it is lazy and condescending to its audience. Its storyline combines the sugary sentiments of a Hallmark Christmas movie (people are happier in shabby houses than big fancy houses, even though they come with bedrooms for everyone, a working clothes dryer, and an elevator for a family member in a wheelchair) and the humor level of a basic cable show from the '90s. Much of the intended humor comes from faux precocious comments by children.

There are only nine children in this blended family, introduced to us in a brisk ten-minute opening sequence with Paul (Zach Braff) bringing us up to date. Paul is a chef who had three children with his first wife, Kate (Erika Christensen). One of their children is adopted, the son of close friends who were killed in an accident. Zoey (Gabrielle Union, who co-produced as well) had two children with her first husband, an NFL star named Dom (Timon Kyle Durrett). After their first marriages broke up, Paul and Zoey got married and had two sets of twins. They run an all-breakfast restaurant together and money is tight.

Both exes are a source of support and strain. Kate is their back-up babysitter and “the littles” (the two sets of twins) love her, in part because she's on the spacey side. They tell her they’re going to play drag race, and she smiles, “I love RuPaul!” and nods off. Dom loves his kids and is generous with their siblings, but he has been away most of the time and when he is there Paul feels threatened. “At least Kate isn’t richer and ten feet taller!” There’s a whole thing about Dom having much larger feet than Paul, and the two dads have a silly dance-off at a school basketball game.

Later there is is a tenth child, Paul’s nephew, a sulky teenager who has had a difficult time. They take him in when his mother is in drug rehab.

Paul has a chance to make some money with retail sales of his delicious sauce. Zoey is concerned. She saw what success and fame did to Dom and their family. But Paul is determined to make enough money to buy the family everything he wants to give them, including a mansion in a gated community and private school. Somehow, even though they now have plenty of money and Dom gave each of the children very expensive sneakers, one of them is still wearing shabby, low-price kicks so that we can have a storyline about his getting bullied at the fancy new school. And somehow, though this is a story about a big family, and it was co-written by Kenya Barris who created the brilliant and hilarious “Black-ish,” with heightened but believable and endearing child characters, this movie spends more time with Paul. He is played by Braff, who was heightened but believable in “Scrubs” and touching in “Garden State,” but he cannot make this character particularly appealing.

The movie awkwardly mixes corny humor, synthetic sentiment, and pointed, if superficial, depictions of overt and subtle racism. Responding to racist micro-aggressions is unfortunately most of what Union is given to do, though she is, as always, graceful and gorgeous, here in a series of excellent hairdos. One indicator of the laziness is too many needle-drop songs on the soundtrack. Yes, Paul left Zoey home alone with the kids; we don’t need Al Green singing “I’m So Tired of Being Alone” to understand that. Another laziness indicator: too many slo-mo entrances. Jokes about a teen boy looking for sexy girls on the internet and one making a crude comment about a girl in a short skirt (who turns out to be his sister) are also just icky. And the family has a daughter in a wheelchair, but no ramps?

Perhaps it's inevitable with so many characters, but the moments that are supposed to be meaningful or heartwarming barely make an impression. My first choice would be a movie based on the real life of the family that inspired the book Cheaper by the Dozen, but I would settle for one that has even a little bit of the original’s wit and heart. 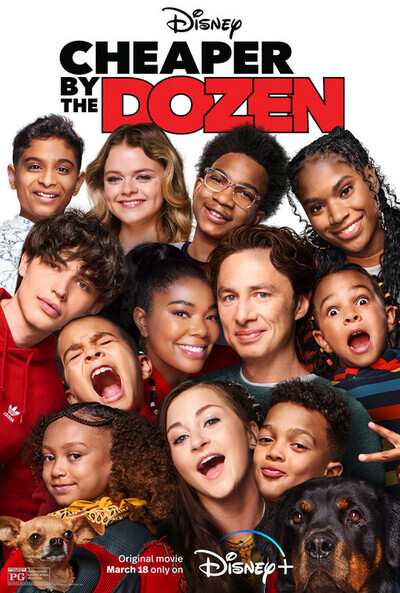