If a body meet a body

A movie like the dismal "Chapter 27" just makes you feel bad for, and about, everybody -- including the wretched souls who made the thing. It's bad enough that the creep who killed John Lennon didn't know what he was thinking when he did it. What about the people who made this movie about him?

You assume that at some point there was a script. After all, director J.P. Schaefer is credited with having written one, based on a book of interviews with Lennon's killer that was published in 1992. Schaefer probably read the book. Somebody probably read the script. There's a lot of writing in it: phony "Taxi Driver"-style narration, rambling and raging monologues, paraphrased passages from The Catcher in the Rye, spoken snippets of Beatles and Lennon lyrics. And it all revolves around one question: Why? As in, why make this movie? The film offers no clues, and reveals no answers.

Let's ask another question: Does the fact that a crazy person killed a famous person for no discernible reason make the killer any more interesting than he would otherwise have been? Answer: not necessarily. "Chapter 27" meticulously examines the scanty evidence and resoundingly confirms that conclusion. "The Assassination of Jesse James by the Coward Robert Ford" reaches quite a different conclusion, portraying a weasel who's more fascinating than the outlaw he shoots. In this case, the subject isn't the problem, the movie is.

The killer of John Lennon was a sporadically suicidal misfit with a history of mental illness (sociopath and schizophrenic were among the diagnoses), a Catcher in the Rye fan who was outraged at the phoniness of the people around him, a former Beatlemaniac, a gun owner and a "born again" Christian who would occasionally became incensed when recalling things Lennon once said or sang, like the remark in 1966 about the Fab Four being more popular than Jesus at the time.

None of which accounts for anything, or makes the subject worthy of more than a moment's screen time. The movie's interest in him is limited to two things: 1) he's crazy; 2) he killed John Lennon.

"Chapter 27" depicts this guy's "lost weekend" -- his time in New York City before he shot Lennon in front of the Dakota. One weekend -- like Holden Caulfield's trip to New York. Or the time between Good Friday and Easter Sunday. Or whatever you want it to be. It's plenty of time to figure out that this guy was confused. The story is that he may have decided to kill John Lennon, or he may have decided not to. But then he did. End of film.

You do feel bad about him. You feel bad that he exists. You wonder why Jared Leto put on more than 60 pounds to play a character who is nothing but a belly, a haircut and some tinted aviator glasses. Leto is known for being pretty (that's why Ed Norton smashes his face in "Fight Club"), and he has since gotten another haircut, removed the glasses and the belly, and has reportedly returned to his former state of prettiness, only now with gout as a side effect from all that weight. You wonder if he suffers from regret, and why he chose to read his Travis Bickle voiceover in a thin, whispery, singsongy voice, like a Tennessee Williams heroine after six juleps and a couple of tranquilizers.

Lindsay Lohan has a small part as a girl named Jude, and I wish I were joking.

The title is derived from the notion that the murderer (why reprint his name?) so strongly identified with the immature and sexually mixed-up Holden Caulfield -- a favorite of hero-worshipping psychopaths who take the discontented character at face value -- that he believed he was somehow adding an additional chapter to The Catcher in the Rye, which ended at 26. What did anyone suppose they were adding with "Chapter 27"? 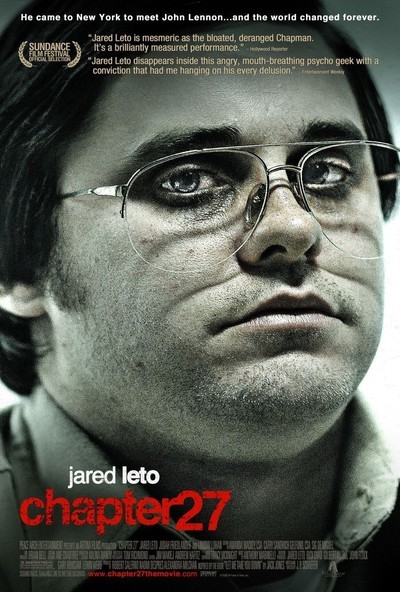