Reportedly inspired by a true story, “Centigrade” should be a tense story of survival against some of the cruelest elements that Mother Nature can use to kill you. Working from other single-setting thrillers like “Buried,” the entire film takes place in a car that’s been immobilized in ice. What would you do if you were trapped? Would you take your chances in the frozen tundra or stay in the car until someone found you? Sadly, this kind of what-if viewer engagement just never happens in co-writer/director Brendan Walsh’s production, which always feels like a thin filmmaking exercise. We never feel trapped in the car in “Centigrade,” allowing the overall weakness of character and story here to dominate the experience. Worst of all, the pacing here is just off, leading to a film that drags even at 90 minutes. If the cold doesn’t kill you, the boredom will.

At first, “Centigrade” wastes no time. Naomi (Genesis Rodriguez) and Matt (Vincent Piazza) wake up in a frozen car that won’t start. They can only see white sheets of ice on all the windows. It turns out that they chose to sleep off an ice storm last night instead of driving through it, and, well, now they’re stuck. Phones won’t get a signal. Car doors won’t open. Matt is certain that someone will drive by looking for them soon and see the car—Walsh occasionally (and it’s a mistake) takes us outside the vehicle to show how unlikely this is given the barren white, snowy landscape. Naomi, who is very pregnant by the way, thinks they should seek help. He makes them wait. And they wait and wait and wait.

And so do we. Matt and Naomi fight a few times, but a film that relies on their relationship also does very little to define it. Sure, there are a few disagreements and airing of past grievances, but Matt and Naomi are, to be blunt, dull. We never get invested in them as people, making their struggle feel even more like a cruel exercise than anything. Of course, the fact that Naomi is about to give birth becomes the driving force of the narrative. Will they get out before she has her baby? What will happen if they don’t?

Walsh never found his way into this allegedly true story when it comes to the most essential element for a single-setting survival film: pacing. Moments after they realize their plight, a credit reads “Day 4,” and I realized I had no sense of time or space in a movie that really needs to convey both. Tension rises in a film like this through those elements—either the sense that time is running out or the walls are closing in. (It would have helped a great deal if Walsh had never left the car and filmed more in close-up, amplifying claustrophobia.)

Ultimately, I never felt the urgency or the intensity of Matt and Naomi's situation. There’s a tighter, shorter version that hits harder and there’s even a slow-burn (or maybe that should be slow-freeze) version that drags out scenes of nothingness in a way that allows us to feel the growing dread. “Centigrade” falls into a weird valley in the middle, and it’s fatal.

Now playing at drive-in theaters and available on VOD. 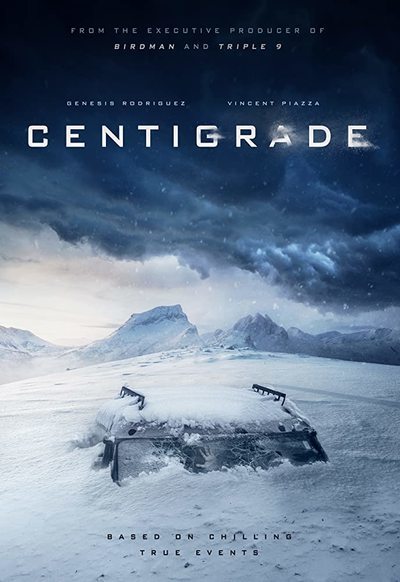