Do you remember the Video Nasties scare of the 1980s? You don’t really need to, not in order to appreciate “Censor,” a British psychodrama about a film censor’s personal connection with the violent movies that she reviews and rates for a living. Realistically, all you need to know about the Video Recordings Act of 1984 and the attendant moral panic that it inspired is: there were a few successfully prosecuted films (30+), as well as some brow-beating editorials, legislation, and protests, and a bit of under-the-counter consumerism.

Today, the Video Nasties—a varied assemblage of disturbing movies that includes “Blood Feast” and “Faces of Death”—are a handy symbol of period-specific suppression. They’re also still a good Rorschach test for personal anxiety. The makers of “Censor” run with the latter interpretation, and do a fine enough job of contextualizing one woman’s struggle to understand why she’s attracted to sleazy horror movies.

The answer is simple enough to be reductive, but still basically true: mousy Enid (Niamh Algar) has unresolved family trauma, and she’s processing it through her work as a film censor at the British Board of Film Classification (BBFC). Enid’s particularly triggered by a controversial news story: a Brighouse resident supposedly saw and was inspired to both kill and eat the face of his wife after watching “Deranged,” a real 1974 horror about a serial killer necrophiliac. Somehow, the British press have discovered that Enid and a fellow censor gave a pass to “Deranged,” despite also requiring “extensive” cuts before its BBFC certification and UK release. Tensions flair, but nothing serious enough to threaten Enid’s job.

Thankfully, “Censor” isn’t a pointless relitigation of “Deranged” or similar films that were either successfully prosecuted or flagged for potential confiscation. Rather, “Censor” is about Enid’s increasing fascination with Frederick North, a fictitious director whose evocatively titled work (“Don’t Go in the Church,” “Asunder,” etc.) indirectly reminds her of a private trauma: the disappearance of Enid’s sister Nina (Amelie Child Villiers), whose death certificate was only recently signed by Enid’s parents. Closure is what they want—Nina’s case is pretty cold, and her body was never found—but it’s the last thing that Enid is comfortable with, given her line of work. So Enid becomes obsessed with finding Alice Lee (Sophia La Porta), the recently disappeared star of North’s films; her investigation obviously does not lead to the catharsis that she hopes for. But that’s part of the movie’s charm: nobody really gets anywhere by talking about violent movies.

Some of the most satisfying parts of “Censor” are the dead-end conversations that Enid and her colleagues have about the necessity of their jobs. Some see themselves as righteous cogs in an inefficient, government-sponsored machine. “How can we do our job properly when we're constantly bogged down by government bureaucracy?" asks Gerald (Richard Glover), making a full-meal out of the four syllables in “bureaucracy.”

Other censors are genuinely disturbed and/or wary of the content that they must scrutinize. “What is it with these directors?” asks Anne (Clare Perkins).

“Male inadequacy; revenge catharsis” replies Enid with a cheeky smile. Maybe she’s answered this one before, if only in her head.

Anne persists: “Doesn’t that bother you?”

But Enid isn’t so easily understood, not yet anyway. “Just focusing on getting it right,” she insists. “Don't even think about anything else.”

“Censor” inevitably becomes a trite, but moody exploration of Enid’s repressed feeling, mostly about Nina, but also her job. Enid looks everywhere for clues, first at a local video store—operated by an understandably leery clerk—and then with North’s proudly unsavory producer Doug Smart (Michael Smiley). The answers that she and her creators uncover aren’t exactly groundbreaking, but they don’t need to be; the constant threat of seeing something forbidden is still palpable and thrilling.

So while Enid’s investigation never goes anywhere noteworthy, “Censor” still fosters an increasingly desperate, anxiety-inducing effect. Parts of the movie were shot on film (35mm and 8mm) as well as video, and that’s part of the movie’s charm. But really, the best thing about Enid, as a symbol and a character, is that she never seems to get anywhere.

Enid’s a cliché of uptight conservativism, as we can tell from her schoolmarm appearance. She wears her hair in a bun. Her aviator-sized eyeglasses are fastened to her neck by a gold chain. Her skin is half-and-half alabaster. She lives to drag viewers deeper into her increasingly frustrated quest for satisfaction. “Censor” is, in that sense, a success, if only because it winds you up, and leaves you wanting a lot more where it came from. There are a number of compelling books about the Video Nasty scare—two immediately come to mind: Kate Egan’s Trash or Treasure and James Simpson’s Video Nasty Mayhem—but “Censor” works, too.

Now playing in theaters and available on demand on June 18. 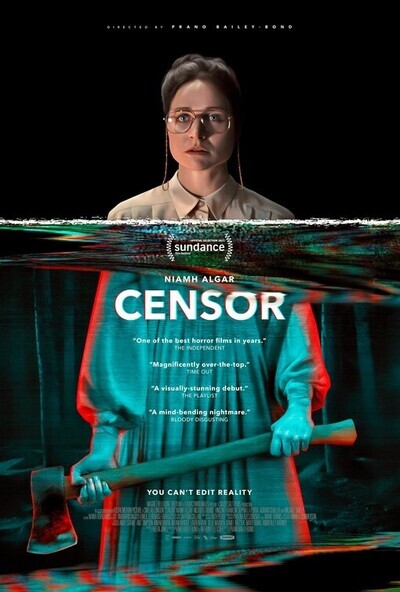