Selections from Caveman Basic, a word guide that was handed to patrons as they entered the theater to see Caveman:

AIEE: Help! Save me!

KUDA: Come here, where are we now this way right here.

NYA: No, none, not happening, negative.

Selections from my thoughts after having seen the film:

Aieee! This movie is fech! We can hardly wait for the end so we can gwee. We kill time in between by eating popcorn and other ool. The movie is ca-ca.

There are a few good moments, mostly involving the giant prehistoric dinosaurs and other machas, especially during zug-zug. But the movie is mostly fech, nya, and pooka, if you ask me.

And yet "Caveman" is fairly successful, maybe because there's a real hunger for an "Airplane!"-type satirical spoof. It gets good laughs with scenes like the one where John Matuszak throws himself over a cliff along with a rock.

But it has a basic problem, which is that there is no popular original material for it to satirize. There has never been a really successful movie set in prehistoric times, although God knows they've tried, with movies like "When Dinosaurs Ruled the Earth" and "One Million Years B.C." Those movies were self-satirizing; by the end, they were making fun of the way they started out.

"Caveman" seems more in the tradition of Alley Oop, crossed with Mel Brooks's Two Thousand Year Old Man. But the only artistic cross-reference it can manage is from the opening scene of Stanley Kubrick's "2000." In "Caveman", the cavemen are shown in the process of discovering modern fire, cooking, and music. During their epochal discoveries, the sound track teases us by quoting from Strauss's "Thus Spake Zarathustra," but never quite getting it right. Why bother to rewrite Strauss? He's out of copyright.

The movie has an interesting cast -- or would have an interesting cast, if the actors were given interesting things to do. Ringo Starr plays the leader of a wandering tribe, and onetime Oakland Raider Matuszak is the leader of the stronger tribe and the boyfriend of Barbara Bach, who wears push-up skunk skins. Starr feels great aloonda for Bach, and whenever he sees her, zug-zug is not far from his mind. But Matuszak is the kind of guy who can break a dinosaur's drumstick in two, and so Starr has to outsmart the big guy. Thus, intelligence is born.

It's a little depressing to realize how much time and money went into "Caveman", an expensive production shot on location in Mexico. This very same material could have been filmed quickly and cheaply on a sound stage, since the production values are obviously not going to make us laugh any louder. And with the added flexibility and the lower stakes, maybe a little spontaneity could have crept into the film. As it stands, the filmmakers seem to learn comedy as slowly as the cavemen learn to whop before they step in the haraka. 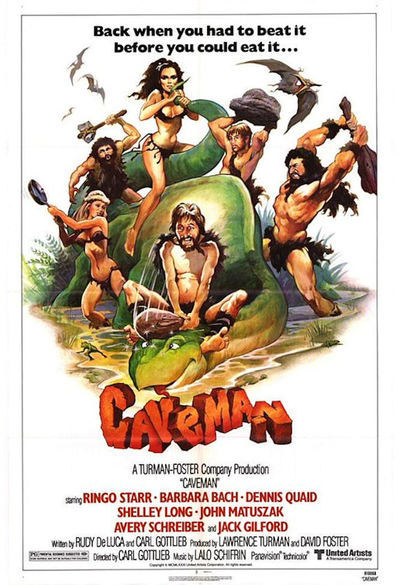