Set in the 13th century, “Catherine Called Birdy” is a labor of love for writer/director Lena Dunham, who first read Karen Cushman’s 1994 Newberry-winning novel of the same name when she was just ten years old. But this incredibly loose adaptation leans a little too heavily into Dunham’s economically oblivious feminism, stripping the novel of much of its thematic heft, resulting in crowd-pleasing, bawdy comedy that’s more heart than it is head.

Lady Catherine aka Birdy (Bella Ramsey), the rebellious 14-year-old daughter of Sir Rollo Lord of Stonebridge (Andrew Scott, oddly presenting himself like a flamboyant Bright Young Thing from the 1920s than a lewd Medieval Lord), spends her days rolling in the mud, playing with her best friend the goat boy Perkin (Michael Woolfitt), and shirking her chores.

When Birdy starts her monthlies, aided by her nurse Morwenna (Lesley Sharp), she hides the fact from her father as long as possible. Having seen her loving mother Lady Aislinn (Billie Piper, doing the best she can to save an underwritten role) go through six stillbirth pregnancies, the last thing Birdy wants to do is be married and become a mother.

However, due to the Lord’s extravagances, the only way to keep the estate above water financially is to marry Birdy off to the highest bidder. From there we follow Birdy as she outwits suitor after suitor, while secretly pining for her Uncle George (Joe Alwyn), the only good man she knows. That is, until she becomes betrothed to a wily rich man called Shaggy Beard (Paul Kaye, maybe the only actor who actually gets Medieval humor), who finds Birdy’s trickery alluring.

As she attempts to find a way out of her fate, Birdy witnesses her friend Aelis (Isis Hainsworth) become married off to a nine-year-old child Duke, while George makes a match with an eccentric, yet rich, widow named Ethelfritha (Sophie Okonedo). Dunham clearly understands that in this era, most marriages were a financial matter. Women were traded for titles, for land, or for cold hard cash.

Which is why it’s so strange that the rest of the economic realities of Cushman’s novel are universally discarded. Scott’s Lord of Stonebridge gets one scene where he briefly explains how when he was 13 he had to save the village by marrying Birdy’s mother, but is cut off by Birdy who calls him out for his own financial misdeeds. In the novel, Cushman elegantly weaves in the economic realities of Lords and villages and the renting of land, explaining the way they are all tied up together in an economic system that mostly only benefits the Royals at the very top.

Why then, does the village in which Birdy and her family live mostly exude a weird utopian Medieval Times vibe? Birdy comments on how her father’s Christmas feasts were more extravagant when she was younger, yet never once does she—or the movie—contemplate how worse off the rest of the village must be in the trickle-down economics of it all. Nor in all its girl power will Birdy get out of this marriage situation as she seems to realize that her fate is also the fate of the village. The money from her marriage will help them all, not just her father.

Cushman’s novel explored what it was like to be a teenager at the time of Medieval England, which is so different from our modern sensibilities that it would be like visiting a different planet. It takes a willful misreading—or disregard—of the book’s ethos to remove the economics from it all, or to strip Birdy from the strength and fortitude she shows in finding value in her ability to save her family, and her village.

One could argue all of this would make for a dour film, yet having read the book both as a child when it was first released and more recently in order to refamiliarize myself with the material, I found it inspiring how well Cushman blends these serious matters with the same bawdy humor that makes Chaucer’s Canterbury Tales still a hoot to read nearly a thousand years on.

And it's this humor that Dunham most faithfully carries on in her adaptation, with flatulence jokes aplenty. Although, most of the film’s jokes do not align with Chaucer, but rather are rooted in wordplay that is funny for a modern audience’s ear only. However, Dunham is not Monty Python, and many of the jokes are either forced or don’t land at all. One sight gag with a pigeon arrives dead on arrival—literally.

Ramsey is indeed a find. Birdy’s spirit is like a wild, roaring brook whose nature is to keep flowing no matter what obstacles lay before her. Unfortunately, key changes from the book’s ending rob her of what should be a transformational coming-of-age. Instead of finding out the value of herself from within, she becomes a damsel to be saved by a man, her value ultimately stemming from her father’s realization of his love for her. While this makes for an emotional finale, especially for Scott, it deprives the character—and Ramsey—of a big moment of self-actualization.

Every film adaptation has to pick and choose what elements of its source material to retain and what to jettison. It’s unfortunate then that for “Catherine Called Birdy,” Dunham sticks so closely to the surface, leaving behind its strong foundation. There is surely an audience for this kind of feel-good quote-un-quote feminism. But a book of such richness, with a heroine as complex as Birdy, deserves much more than this genial Renn Faire romp.

This review was filed from the Toronto International Film Festival on September 12th. "Catherine Called Birdy" will release in theaters on September 23 and be available on Prime Video on October 7. 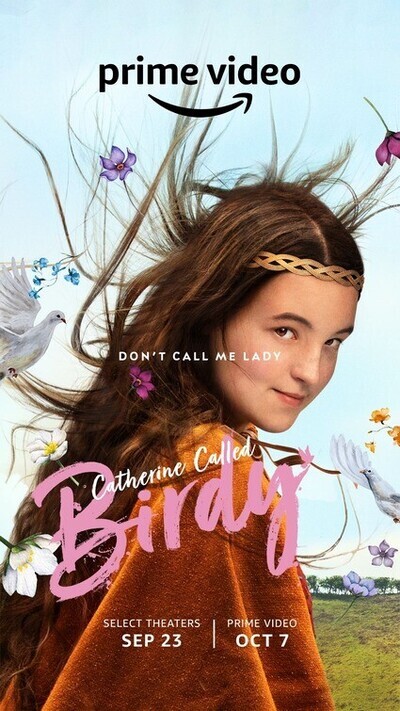 Rated PG-13 for some suggestive material and thematic elements.