2015 is shaping up as a great year for powerful, harrowing documentaries about entertainers. Films like “Amy”, “Cobain: Montage of Heck” and “What Happened, Miss Simone?” have left indelible emotional impressions on viewers. “Call Me Lucky,” Bobcat Goldthwait’s film about Barry Crimmins, is a worthy addition to this list. These well-structured films superbly explore how their subjects used their craft as outlets for their pain. In the cases of Nina Simone and Barry Crimmins, their artistic gifts were also used as a means of activism against a cruel, oppressive system. None of these films are designed to be easy viewing, and “Call Me Lucky” will be an especially grueling ride for those who can identify with Crimmins’ trauma. Yet its toughness does not at all diminish its worth. It remains an essential viewing experience.

I walked into “Call Me Lucky” without much knowledge of Barry Crimmins. I knew only about his comedy routines from my high school and college years, when my buddies and I devoured anything by comedians like Steven Wright. Crimmins also served as a mentor of sorts to up and coming comedians like Goldthwait and Goldthwait’s classmate Tom Kenny (of “Spongebob” fame). Syracuse native Goldthwait appears onscreen with Kenny to reminisce about how they first encountered the much older Crimmins, who hailed from nearby Skaneateles, NY. Crimmins became an advisor on comedy to the teenage “Bobcat” and “Tomcat”.

“Skaneateles is an Indian word meaning beautiful lake surrounded by fascists,” Crimmins tell us. Upon happily leaving his hometown, he founded two nightclubs in Boston, The Ding Ho and Stitches. Every Boston comedian of note came through one of these clubs, people like Steven Wright, Kevin Meany, Denis Leary and Paula Poundstone. Crimmins also performed at them, establishing himself as an angry truth-teller who wasn’t afraid to skewer politics or teach his audiences something in the process. “He was always angry about something,” we are told, “and he did not suffer fools kindly.” “Call Me Lucky” backs this assessment up with a clip of Crimmins dismantling a heckler for what seems like an eternity.

Crimmins’ onstage persona was never seen without cigarettes and beer. He used his tall, occasionally unkempt frame to tower over the world as he worked through his routines. “Call Me Lucky” is exceptionally generous in showing Crimmins’ early comic successes, intercutting them with footage of his most recent stage appearance. The film also works in plenty of stories from friends and colleagues, including one where Crimmins is apparently struck by lightning at an outdoor concert in Watkins Glen, NY. (This is depicted in a hilarious animated sequence that makes Crimmins look like a less raggedy version of film critic Gene Shalit.)

The first 45 minutes or so focus on what one would expect from a documentary about an influential comedian and satirist. There are hints of darker moments, such as when Crimmins describes how mean his local Catholic priest was to him back in his alter boy days, but there are still numerous laughs to be had. Goldthwait doesn’t telegraph the terrifying turn “Call Me Lucky” eventually takes. If you are unfamiliar with Crimmins’ activism, as I was, this turn is one hell of a blindside. It’s as unexpected as the actual revelation was to Crimmins’ audience on the night he bared his soul and his secrets in 1992.

The current-day Crimmins, whom we see several times throughout the documentary, tells us that, as a child, he was repeatedly raped by a man his babysitter always brought to the house. The man would take him into the basement for the assaults, which were so violent Crimmins would lose consciousness. After opening up about his ordeal in 1992, Crimmins became an activist for children’s safety. This led to him stumbling upon all manner of child pornography chat rooms on the newly formed ISP America Online. At great psychological cost, he researched these rooms, constantly reporting his findings to an ISP that didn’t seem to care.

Eventually, Crimmins testified before Congress about his findings. Next to him was a top lawyer from America Online. “Call Me Lucky” presents the jaw-dropping testimony of the AOL representative, who mentions that pedophiles were afforded “three strikes” before being kicked off the site for good. Using the skills he honed onstage, Crimmins calmly shoots down every argument offered by AOL while also exposing how stupid the U.S. Senators were about computers. “They were proud of their lack of knowledge,” he tells us in voiceover. One senator infuriatingly hurries him along as if this damning testimony about illegal activity is wasting the government’s time.

The second hour of “Call Me Lucky” is full of hauntingly powerful moments that are overwhelmingly moving and never exploitative. At his subject’s advising, Goldthwait interviews Crimmins’ sister, Mary Jo Smith, who witnessed one of her brother’s assaults and ran in a futile attempt to get help. “He said you were his hero,” Goldthwait says before Smith tearfully tells her story. Later, we learn that the priest who gave Crimmins so much verbal abuse turned out to be a prime suspect in the Catholic Church sexual abuse scandal. The priest had raped many of Crimmins’ fellow church members before being relocated and eventually exposed. Details like this make it easy to understand why Barry Crimmins devoted the last 20-plus years to his activism, and why any kind of violence against innocent victims troubles him so much.

The film’s final moments achieve a sort of grace. Before the last few minutes of Crimmins’ latest stage performance, “Call Me Lucky” revisits the basement where the sexual assaults took place. The way this scene is shot, and Crimmins’ reaction to returning there, are both surprisingly understated and extremely inspiring. Goldthwait focuses on the room, leaving his subject off-screen for his most private moments. “I don’t see myself as a victim,” Crimmins says after the visit. "I'm not a victim. Well not anymore. I'm a witness."

“It’s not like it killed me,” he continues. “It almost killed me, but I'm still here. So you can call me lucky." 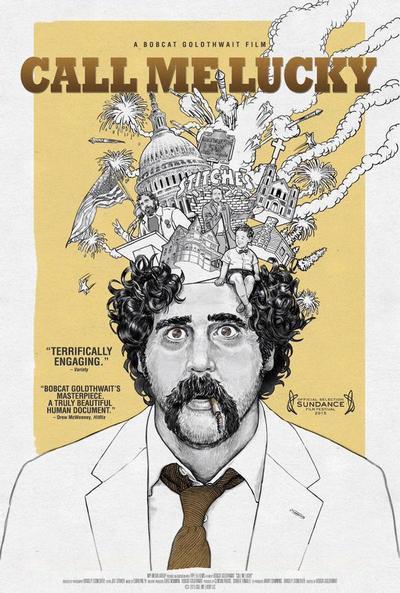 Barry Crimmins as Himself