The claustrophobic prison movie “Caged” begins with its most original and upsetting scene: wrongfully convicted prisoner Harlow Reid (Edi Gathegi) calls and fails to get through to his lawyer right before he’s forced into solitary confinement. The camera pushes in on Harlow slowly as he, standing between two sets of guard doors, learns that his lawyers have just dropped his case. An anxious secretary (Jessa Zarubica) informs him that his assets have been seized, so his appeal for a new trial must be re-submitted with a public defender. Unfortunately, Harlow doesn’t have access to any of his belongings while he’s in solitary, not even a sharpened pencil, so filing an appeal will take some doing.

The emotional weight of this scene is devastating because there’s literally nowhere for Harlow to go except his cell. “Why do you keep apologizing to me?” he asks Zarubica’s voice, not realizing what writer/director Aaron Fjellman’s restricting camerawork and blocking have already shown us: nobody outside of Harlow’s cell is coming for him.

“Caged” is pulpier, and therefore thinner than its opening scene, especially given how generic Harlow’s ghosts often are. Still, his story is often disturbing in spite of Fjellman and co-writer James ‘Doc’ Mason’s over-reliance on cheesy flashbacks and canned confrontations with Officer Sacks (Melora Hardin), a vicious prison guard. “Caged” is as promising as it is because Fjellman and Mason are mostly committed to making us feel as disoriented and desperate as Harlow.

The film's focus on Harlow’s subjective experiences is a risk that doesn’t always pay off, especially during the movie’s concluding half hour, but for the most part, “Caged” is thankfully more focused on his hellish living conditions than his personal problems. Watching Harlow struggle to write his appeal—or get a full portion of food, or collect his belongings—is far more compelling than slogging through flashbacks to his final moments with his uncaring wife Amber (Angela Sarafyan), who died in a mysterious yacht-related incident following an argument about her rich parents and a recent affair (she cheated on him, of course).

“Caged” ironically only turns more impersonal once Harlow’s story becomes less about how prison degrades him, and more about what he discovers about himself once he’s almost completely dehumanized. Harlow’s a typical prison movie underdog in that he’s more compelling as a problem-solving cypher than he is as a two-dimensional effigy, defined mostly by the voices in his head—“They don't know what you're capable of, but I do,” he tells his reflection—and his weak backstory.

It’s not surprising, then, that there’s not much to Gathegi’s character once he starts thinking about his imprisonment as a reflection of his personal identity. Harlow's faith, masculinity, and race are all briefly considered, but never long enough to flesh out insinuating dialogue, like when a prisoner in an adjacent cell growls at Harlow: “Hey, black man: you believe in God?”

Thankfully, Sacks’ contempt for Harlow is believable enough to make “Caged” seem tense enough throughout. Hardin digs into her over-ripe lines with unseemly relish, which is only appropriate since she has to say stuff like, “I can't wait to see you swinging from your bedsheet. For me, that's justice done.” Fjellmann’s also makes Hardin’s face seem genuinely monstrous using distorting camera lenses and filters, and Gathegi keeps his scenes emotionally grounded, except for when Harlow starts to yell at his reflection in an unconvincing tough guy voice (“'If you keep letting her treat you like a b***h, I'm gonna have to take care of her myself!”).

I was also impressed by a handful of incidental details that open up “Caged” and make it (a little) more than a monotonous series of conflicts between Harlow and Sacks. Like how pious Warden Perez (Tony Amendola) is often more threatening because he seems to genuinely believe that “the road to rehabilitation starts with” confessing to a crime that he didn’t commit. Or when Officer Ganser (Robert R. Shafer), Sacks’ fellow guard, completely ignores Harlow, and he, with apparent sincerity, re-assures Sacks that he’ll “be right back,” as if she needs back-up.

“Caged” is most effective when it’s focused on Harlow’s paranoiac certainty that nobody on the outside of his cell cares for, or even really sees what he’s going through. There’s a few too many melodramatic clichés thrown in at the last minute—yikes, those yacht flashbacks—but Harlow’s plight is as disturbing as it is because of the reflexively cruel nature of his punishment. Watching Harlow struggle with the simultaneously impersonal and obviously prejudiced nature of his imprisonment is often enough to make “Caged” seem like more than the sum of its parts. 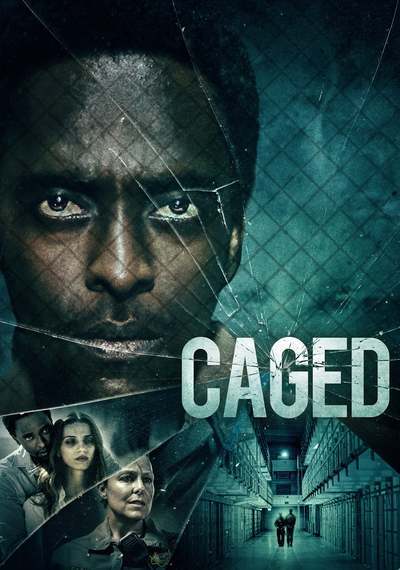