Married couple Leonora and Jacob (Gitte Witt and Thomas Gullestad) accept a sketchy invitation from rich creep Mathias (Thorbjørn Harr), who, after a devastating nuclear war, promises a free meal and entertainment to all of his guests. Mathias’ invitation is immediately suspect because, well, look at the scenario: shelter, food, and general resources are scarce, but some rando has promised a full meal, as well as an evening of sinister, interactive dinner theater, from inside a cavernous, disused luxury hotel. “May I show you my wonderland?” asks Mathias, from behind neatly parted hair, a black bow tie, and a well-pressed dinner jacket. Mathias is directly addressing Alice (Tuva Olivia Remman), Jacob and Leonora’s impressionable young daughter. If you don’t know where this story is headed, you’re either in denial or not paying attention.

Thankfully, Mathias’ obviously evil nature is sort of the crux of “Cadaver”: what do you do when you have no choice but to accept threatening new possibilities at face value, because, in order to survive, you have to make yourself think positive? That tension not only defines Leonora and Jacob’s relationship—she’s a reluctant optimist while he’s a mopey pessimist—but also Mathias’ character: he’s clearly malicious, and also maybe the only game in town. “Cadaver” is a suggestive fable about struggling to be hopeful despite, well, everything. It's also a little too monotonous and uninvolving to be of great solace right now.

Thankfully, “Cadaver” does have an effectively chilly ambience, which helps a little whenever writer/director Jarand Herdal’s scenario is as obvious as Mathias. Herdal’s story mostly follows Leonora as the most sympathetic protagonist is inevitably separated from her family while they explore Mathias’ hotel. Jacob is relatable, too, but it’s much easier to side with Leonora given that she’s the one who insists that “we have to believe that things will work out.” “How can you be so sure?” Jacob asks her one night while they lie in bed, their faces juxtaposed in complimentary halves. “Because it has to be,” she responds inelegantly.

Bear in mind, trusting Mathias is the thing that “has to be” done. Which requires a Herculean effort, as far as suspending one’s disbelief goes, since Mathias’ dinner party is advertised as an “exclusive show” for anyone who wishes to “escape the horrors.” “How much are [tickets]?” Leonara asks a barker who looks suspiciously like the Child Catcher from “Chitty Chitty Bang Bang.” “How much do you have?” he replies. That’s it, that’s the scene.

Mathias’ castle/hotel isn’t much more inviting. Incautious guests are seated before a harshly-lit stage in an otherwise dark ballroom. Formally attired waiters bring out steaming trays of mystery meat, which are naturally picked clean by Leonora and the others. Then Mathias takes the stage, and asks his guests to explore his hotel’s rooms, which are filled with actors performing inscrutable and very Scandinavian mini-dramas throughout: mostly couples arguing with each other, or, in one case, having dispassionate sex. Mathias’ guests soon disappear, including Jacob and Alice, leaving Leonora alone to discover what exactly Mathias wants.

But there really isn’t much to Mathias, which is arguably his most frightening trait. He’s a demagogue, but even his speeches aren’t especially rousing: “What makes us human in times like these?” he asks his wary guests. “What separates us from the animals?” Short answer: “Love.” Longer answer: nothing in Mathias’ castle, a place defined by lush, red hallway carpeting, a rumpled pile of children’s clothing that Alice discovers in a dark corner, and a roaring furnace tended by, uh, some actors. “One thing is certain,” Mathias tells us, in a rare moment of honesty: “we need to feel.” He says this after he warns his captive audience that, “Everything that takes place tonight is staged. Everything is a show. Everything.”

So we follow Leonora, a former actress, as she applies the sort of “imaginative” training that she hints at early on in “Cadaver” when Alice asks her mother how she overcame stage fright: “... sometimes you have to face your fears. That way you won’t be so scared.” That line pays off later on, and in a mostly satisfying way, but getting there is a bit of a slog. You have to wade through several unmoving scenes where Leonora discovers some things that are often glaring to everyone, including herself. Herdal should have delved a little deeper into Leonora’s tortured headspace, though watching her try to reason her way out of a trap laid by a bread-and-circuses-loving tyrant has its charms. 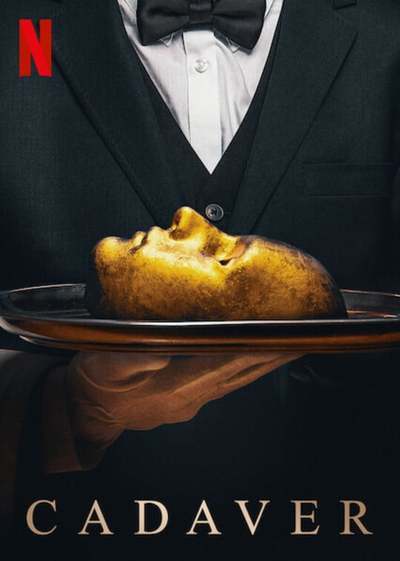