The British post-war thriller “Burial” has all of the right elements to be a great time-waster. Set in West Poland just after World War II, writer/director Ben Parker’s period piece follows a troop of Russian soldiers as they try, despite their personal reservations, to follow orders and deliver Hitler’s corpse to Stalin in Moscow. Along the way, there’s some talk about how historic events can only really be understood by the people who witnessed them first-hand. That ambitious conceit is only so important though given how underwhelming Parker’s alternate historical narrative tends to be on a moment-to-moment basis.

The fact that Parker’s movie takes place right after the war gives “Burial” the potential for some thoughtful consideration of a soldier’s duty, to history and to their fellow men. There’s also some room for cheap thrills, too, thanks to the looming threat of Nazi “werewolf” soldiers, who are sadly not shape-shifting wolf-people. Rather, they're human Germans who wear wolf pelts and terrorize their opponents by burning lichen and mushrooms, creating a hallucinogenic effect. “Burial” has a hard enough core, both in terms of its central premise and its pulpy tropes, that for about 30 minutes, it almost works as a decent B-movie, right before it unceremoniously falls apart.

“Burial” starts with a home invasion in 1991: Karl (David Alexander Parker), a tough-talking neo-Nazi, sneaks into the London apartment of unassuming pensioner Anna Marshall (Harriet Walter), who, during WWII, was actually a Russian soldier named Brana (Charlotte Vega). Karl has heard stories about Anna’s past and wants to know if they’re true: did she really transport Hitler’s body out of Berlin, and if so, where is it now? Anna swiftly tases and doses Karl, and chains him to her radiator. She then tells him her what really happened, because he only knows part of the truth.

In 1945, Brana and her team were given a special mission—transport a full coffin from Poland to Moscow on foot, making sure to bury the container every night along the way. Brana’s joined by a number of Easy Company-worthy stock types, like Iossif the baby-faced innocent (Bill Milner) and their unlovable nominal leader, Captain Ilyasov (Dan Renton Skinner). Their group eventually opens the box, gets shot at by Werewolf soldiers—who have remained loyal to the Nazis out of sheer stubborn fanaticism—and befriends a pair of native Polish allies: the suspicious Justyna (Ester Kuntu) and the weary Lukasz (Tom Felton). The Nazis, led by placeholder villain Wolfram Graeber (Kristjan Üksküla), want what’s in the box, because they’re Nazis.

Brana is the most outspoken mouthpiece for the movie and its staid understanding of a soldier’s role. She knows, before they open the box, that the body they’re transporting is Hitler because she’s been told that his identity was proven by his dental records. Brana also knows enough to identify with Justyna, who complains that the Russians and the Germans are both alike in their mutual post-war cruelty and macho arrogance. Brana sees enough of Ilyasov and his men’s actions to know that sexual violence is just as real of a threat as the Nazis who hope to murder them and also disrupt their high-stakes mission. When Brana considers her responsibility—to deliver Hitler’s body, despite her personal disgust with the man and his actions—she still knows what she must do: deliver the body, despite everything.

Unfortunately, the threat posed by Wolfram and his men never escalates to the point where they seem credibly imposing as humanoid representatives of the horrors of war. Ilyasov and his guys are also uncomplicated, as far as war movie antiheroes go. We’re shown how they can pose a certain kind of threat, despite their other qualities, but that threat is never really addressed.

Parker's script doesn't have to provide viewers with closure, but a sense of forward momentum or just immediate gratification might have helped put it over the top. A strong ensemble cast does a lot with a little, particularly Vega and Skinner, who are quite good at selling Parker’s flat-footed dialogue. Composer Alex Baranowski’s droning string score also deserves special credit for almost surmounting the movie’s general lack of tension.

“Burial” is about the complicated nature of being a soldier, particularly how much you must rely on your comrades to have your back. But while Parker always clearly broadcasts his movie’s concern with moral relativity and the fog of war, “Burial” never really comes together as a drama. Bald dialogue and a paint-by-numbers plot are one thing, but sluggish, underlit action scenes, and underwhelming scene-to-scene pacing are another entirely. 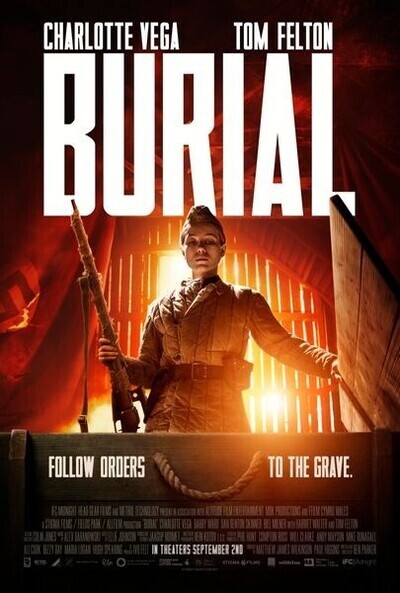